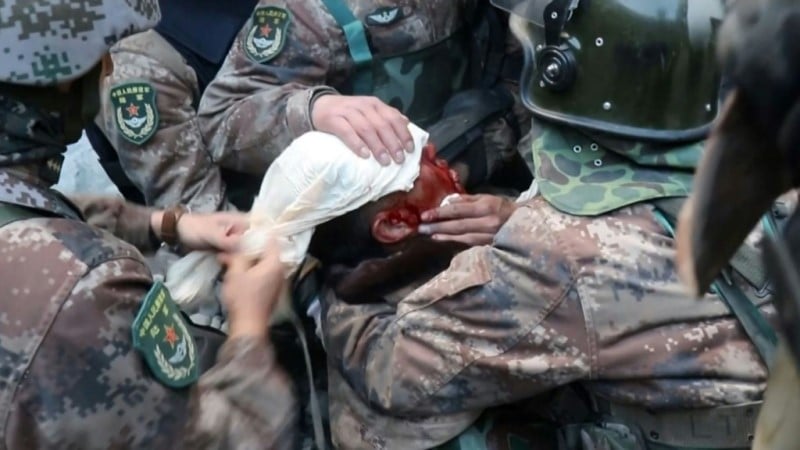 China’s defence ministry on Friday named four soldiers killed in the brawl, in the first confirmation of deaths by Beijing from an incident that also claimed the lives of at least 20 Indian soldiers

China’s defense ministry on Friday named four soldiers killed in the brawl, in the first confirmation of deaths by Beijing from an incident that also claimed the lives of at least 20 Indian soldiers.

A bilateral accord prevents the use of guns by either side, and brutal clashes between the two sides on the ill-defined border often involve sticks, rocks and fist-fights.

“They have now moved another new tent here,” one soldier says in the video, which claims the Indian side broke the consensus and crossed the line to “provoke” Chinese soldiers.

Later footage shows a large melee of troops from both sides and clashes in the dark, before Chinese soldiers are seen treating a man on the floor whose head is covered in blood.

The high-altitude border battle in the Galwan valley in June was one of the deadliest clashes between the two sides in recent decades.

Beijing acknowledged that the clash had resulted in casualties but did not confirm if any Chinese soldiers died until this week.

The CCTV voiceover said the Chinese soldiers were “heroically sacrificed”.

Battalion commander Chen Hongjun and three other soldiers have been given posthumous awards, the defence ministry said. State media reported that the youngest soldier to die was 19.

India and China fought a border war in 1962 and have long accused each other of seeking to cross their frontier — which has never been properly agreed — in India‘s Ladakh region, just opposite Tibet.

Beijing and New Delhi later sent tens of thousands of extra troops to the border, but said last week they had agreed to “disengage” along the border area.