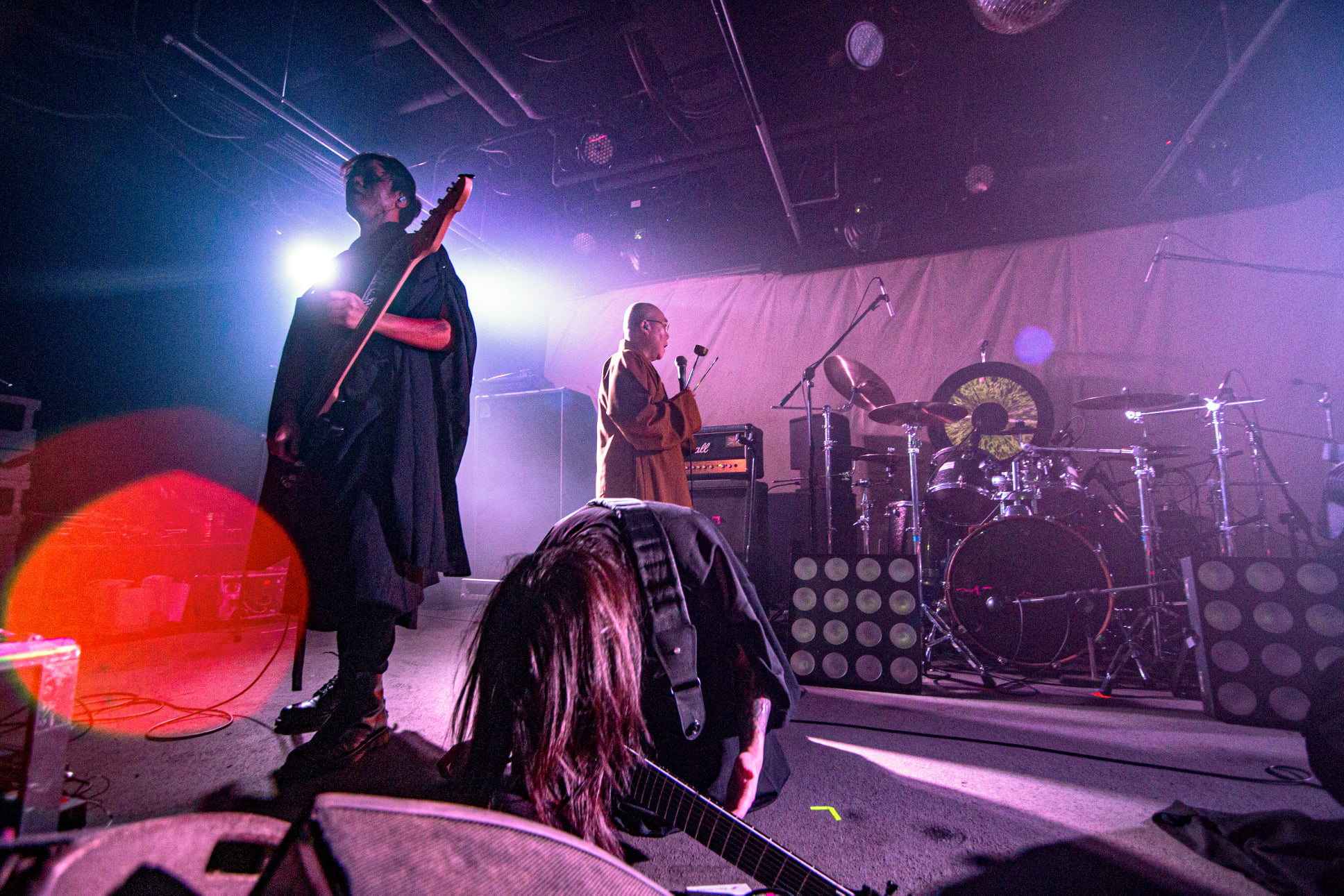 The gig began with a nun chanting on stage but suddenly erupted into a wall of noise unleashed by distorted guitars and screamed sutras — the unique sound of Taiwan’s first Buddhist death metal band.

The island has a vibrant metal scene but few outfits are quite as eye-catching as “Dharma”.

The band aims to deliver enlightenment via the medium of throaty eight-string guitars and guttural roars.

Dressed in robes — black, of course — they use traditional Sanskrit sutras as lyrics. But everything else screams death metal, from bloody face paint on stage, to growled vocals, relentless riffs and double-kick blast beats. 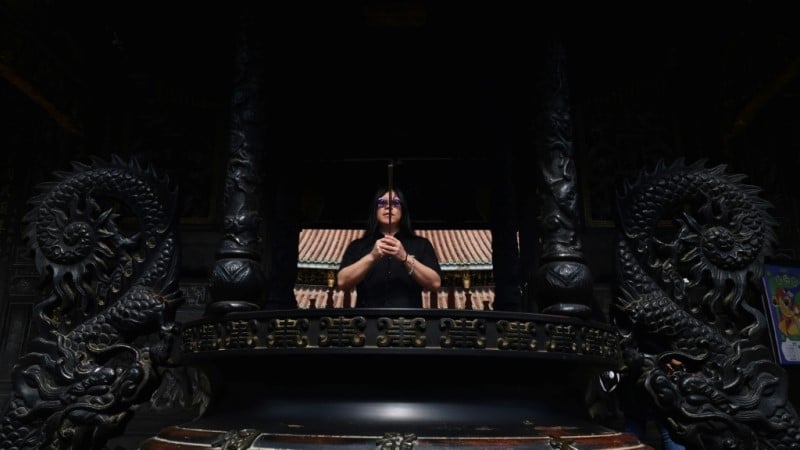 The gig began with a nun chanting on stage but suddenly erupted into a wall of noise unleashed by distorted guitars and screamed sutras.

Founder and drummer Jack Tung first came up with the idea 14 years ago after listening to a recording of Tibetan lamas reciting sutras.

“The way it’s sung is like in metal, with some voice distortion,” he told AFP, referencing the often throaty low nature of Tibetan chanting.

“This is very similar to death metal music which I like.”

Get Behind me Satan

On the face of it, death metal and Buddhism might not appear to be the most natural of bedfellows.

While many were simply trying to shock, some bands — especially out of Scandinavia — were committed Satanists or vehemently anti-religion.

But like any genre, the scene evolved to welcome a vast array of views and philosophies.

Miao-ben, the Buddhist nun who opened a recent Dharma gig in Taipei with traditional chanting, said she had no issue taking the stage alongside such music.

“Buddhism is not set in form. Having Buddha in our hearts is more important,” she told AFP.

Unlike more dogmatic faiths, she added, Buddhism is syncretic.

“This is just another form of Buddhist sutra ceremony,” she said of the set-list. 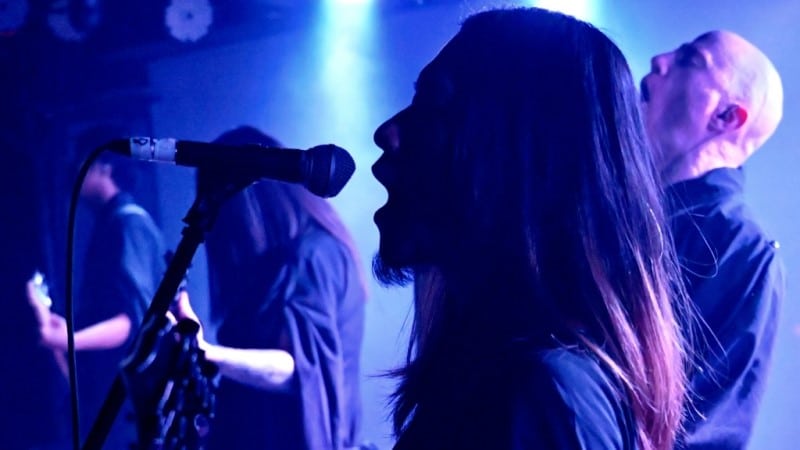 Bringing Dharma together was not easy.

“I asked many people and nobody wanted to be in a ‘religious’ choir,” laughed Tung, a practising Buddhist.

He decided to work on the songs first, primarily with guitarist Andy Lin, who also grew up in a devout family, and find remaining band mates later.

They sought the advice of Buddhist Master Chan Song, who provided interpretations of the ancient text and rituals.

Among Master Song’s students was Joe Henley, a Canadian who moved to Taiwan 15 years ago and is now the lead singer.

“Buddhism has become a regular part of my life now,” said Henley, explaining his decision to covert. “I want to do this right. I wanted to be respectable.”

The band’s first single “Sapta Jina Bhasitam Papa Vinasana Dharani”, an incantation about peace and wellness, is currently being mastered at a Polish studio and will be released next month.

“We are getting a lot of attention, I guess because we are doing something new,” said Henley. 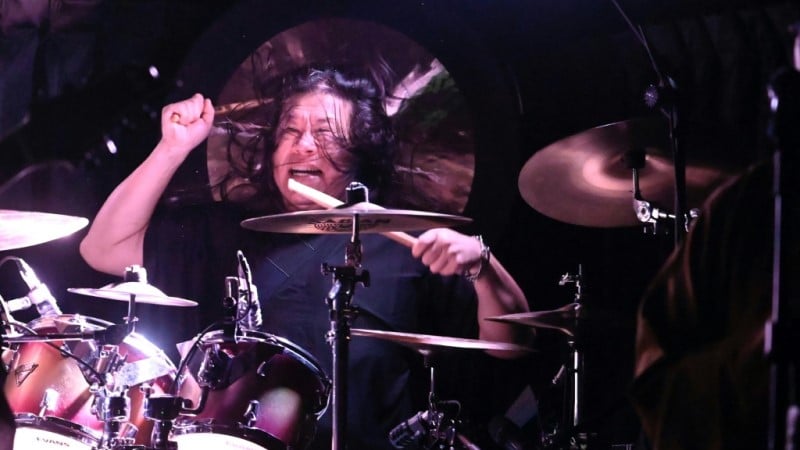 Tung, who declined to give his age, grew up when Taiwan was a dictatorship and authorities heavily censored rock and metal.

The island transitioned towards democracy in the 1980s and 1990s and Tung devoured whatever he could find.

Bands like Guns N’ Roses and Cinderella introduced him to rock while pioneers such as Sepultura and Napalm Death got him hooked on the more extreme metal.

Taiwan has since morphed into one of Asia’s most progressive democracies with vibrant artistic communities and sub-cultures.

The island’s most famous metal act “Chthonic”, which utilizes traditional instruments like the erhu alongside guitars, has toured globally and is fronted by Freddie Lim, a now prominent politician. 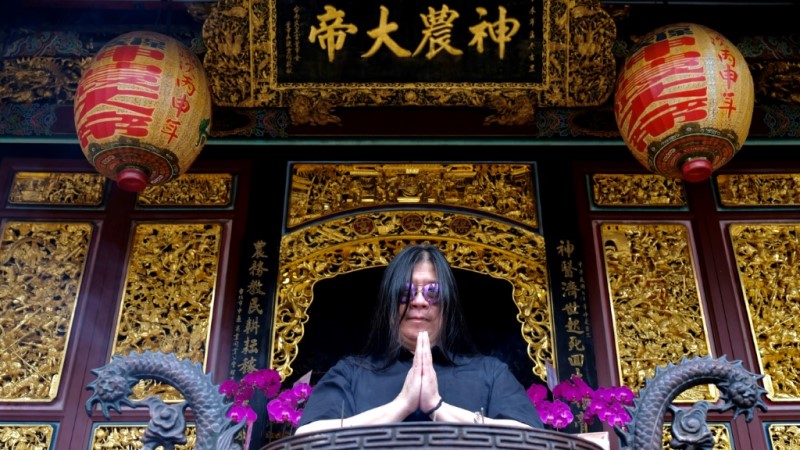 Younger generations, especially those in the cities, have embraced a distinctly Taiwanese identity and are less likely to be as religious as their parents.

Tung hopes to change that in whatever way he can via music.

“We have democracy and lots of freedom and we live in a very open society,” he explained. “But social morality has declined”.

Dharma’s live act is deliberately infused with Buddhist traditions. The sutras are projected on screens so fans can read them.

Their face paint embodies the fierce looking deities found in many temples that fight evil spirits.

“You can’t defend god by being nice and polite,” said Tung.

Celine Lin, 27, came to Dharma’s gig with a friend and was looking up Buddhist texts on her phone during the break.

“The music blew my mind,” she enthused. “It got me interested in sutras and their meanings.”

That is music to Tung’s ears.

“If we can influence one person who came to see our performance… I consider the performance a success,” he said.