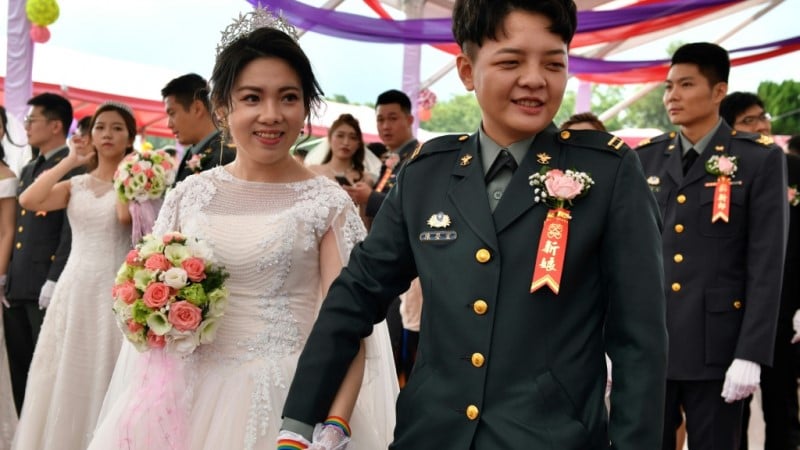 Waving rainbow flags and shedding tears of joy, two Taiwanese same-sex couples tied the knot on Friday at a mass wedding hosted by the military in another landmark for Asia’s LGBT community.

Taiwan is at the vanguard of the burgeoning gay rights movement in Asia and became the first place in the region to allow same-sex marriage in May 2019 after a bruising political fight.

Nearly 200 couples paraded at an army base in northern Taoyuan county before exchanging vows at an outdoor ceremony.

Among them were two Taiwanese female soldiers and their civilian same-sex partners, a first for the island’s armed forces which regularly hosts mass weddings for staff. 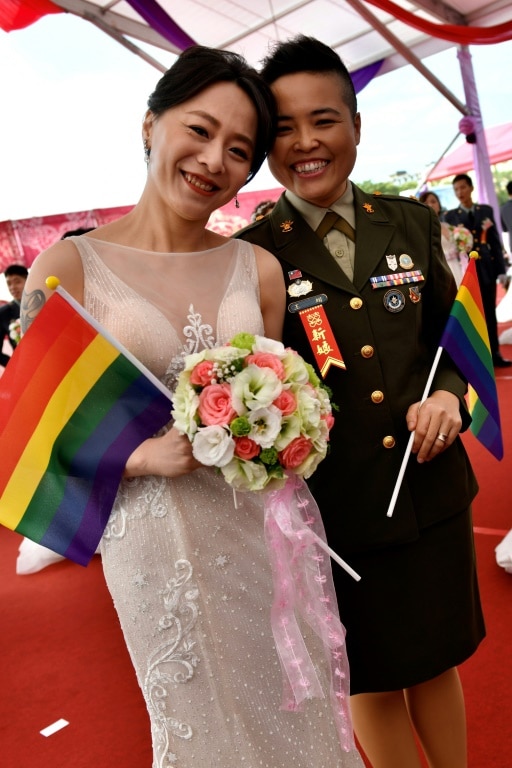 “This is another big step forward for the military,” Lieutenant Chen Ying-hsuan, dressed in her army uniform, told reporters.

“I hope more same-sex couples can bravely stand out. The military is open and we are all equal in front of love,” the 27-year-old added.

“Our love is no different than any heterosexual couple,” beamed her 26-year-old bride Li Li-chen, dressed in a traditional white gown.

“We are here today in the hope that more same-sex couples will join the next (mass wedding).”

Major Wang Yi, 36 and her partner Yumi Meng waved rainbow flags as they posed for photos with family in front of an armoured vehicle.

“It’s great to see the progress in the military,” said Meng, 37, adding that she was “proud” her wife was a serving soldier. 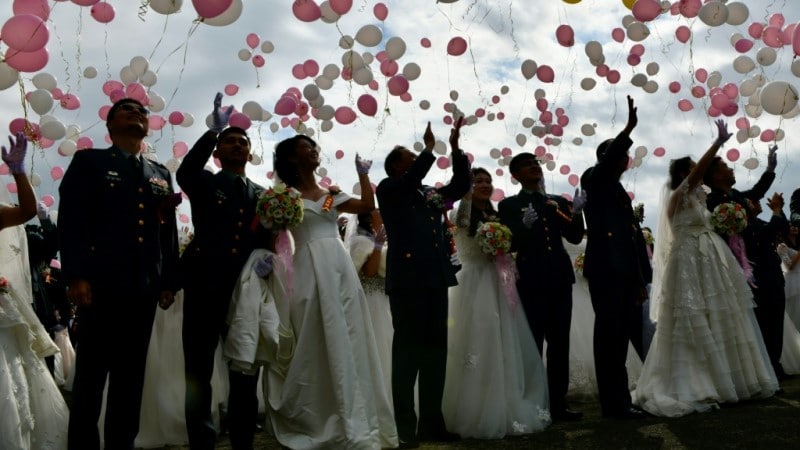 Photos of the two couples went viral after they were posted on the army’s Facebook page earlier this week, with congratulatory messages pouring from across Taiwan and beyond.

Three same-sex couples were planning to join a mass wedding hosted by the Navy and the Air Force last year, but they pulled out following huge media interest.

Taiwan was once blanketed in the martial authoritarianism of Generalissimo Chiang Kai-shek, but in recent decades it has emerged as one of Asia’s most vibrant liberal democracies.

In the last ten years, it has become increasingly progressive on gay rights with Taipei hosting by far Asia’s largest annual pride parade.

Last year, Taiwan made history with the region’s first legal gay weddings after parliament passed a same-sex marriage law with couples tying the knot in jubilant scenes broadcast around the world. 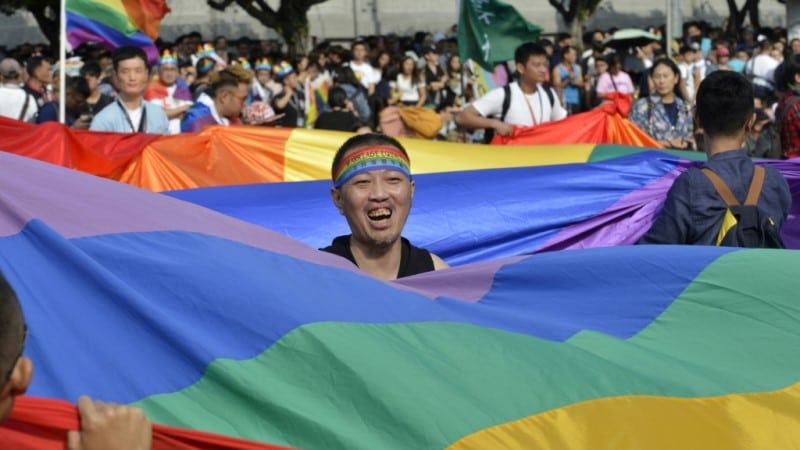 Taiwan will hold its annual gay pride march on Saturday

Over 4,000 couples have registered their marriages since the law took effect.

The island will hold its annual gay pride march on Saturday, with large crowds expected in one of the few places that have managed to successfully defeat the coronavirus pandemic.

But the issue has caused deep divisions on the island, especially among conservative religious groups and older generations.

President Tsai Ing-wen faced a backlash from some members of the Christian community after she encouraged people to join the pride march this year on her social media accounts.

Following her remarks, an annual prayer breakfast hosted by religious groups, which the Taiwanese president is normally invited to, was canceled for the first time in 20 years.

Tsai supports gay rights and took a political risk at the time in pushing for same-sex equality.

But she was re-elected with a landslide in January.

Taiwanese LGBT groups held a smaller pride march in June — the traditional pride month — in solidarity with gay communities around the world who were unable to celebrate because of the pandemic.

While the gay marriage law was seen as a major success for the LGBT community in Taiwan, it still contains restrictions not faced by heterosexual couples, including for adoption and foreign marriages.