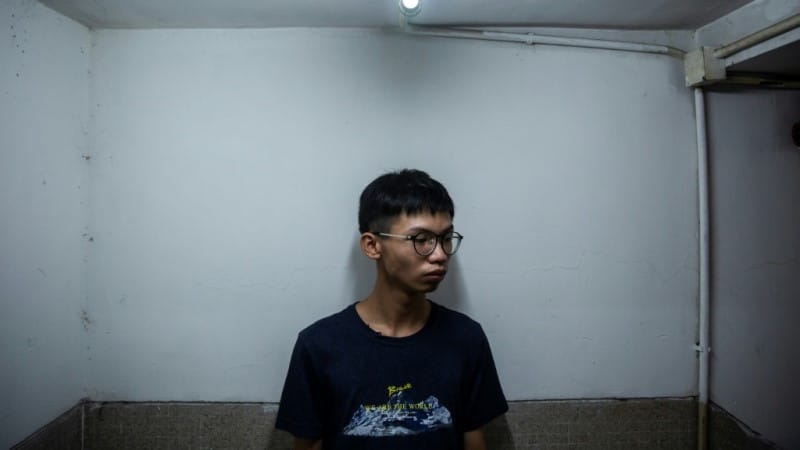 A Hong Kong teenager was found guilty on Friday of insulting China’s national flag and unlawful assembly as Beijing accelerates its crackdown on dissent and the city’s pro-democracy movement.

Pro-Beijing authorities have increasingly targeted the most prominent activists in the finance hub, including young leaders such as Joshua Wong and Agnes Chow, who were jailed last week.

Tony Chung, a 19-year-old who led a now-disbanded pro-democracy group, was convicted for throwing the Chinese flag to the ground during scuffles outside Hong Kong’s legislature in May 2019.

“The actions of the defendant were out of question defiling the national flag in an open manner. The defendant walked back and jumped to throw the flag which made more people able to see what he did,” Magistrate Peony Wong said.

He was arrested by plainclothes police opposite the US consulate in late October and had been remanded in custody since.

Speculation has swirled that police moved on Chung because he was hoping to ask for asylum at the US consulate in Hong Kong.

He did not plead guilty to the flag insult or unlawful assembly, which carry a maximum of three and five years respectively.

He will be sentenced on December 29.

“Hong Kongers hang in there,” Chung shouted to supporters in court.

Chung is also the first public political figure to be prosecuted under the sweeping new national security law imposed in June by Beijing on Hong Kong to quell anti-government protests.

He faces a charge of secession under the new law, which could land him a life sentence, as well as separate charges of money laundering and conspiring to publish seditious content.

After Friday’s verdict, the former leader of pro-independence group Student Localism will be jailed while awaiting trial for the more severe national security charge.

The alleged flag offence took place during scuffles between rival supporters as pro-democracy lawmakers inside tried to prevent the passing of a now-abandoned extradition bill.

In footage shared at his trial, Chung is seen holding a Chinese flag seized from a Beijing supporter, which he then throws over his shoulder.

Prosecutors had accused him of an intentional insult, calling his squat, jump and throw of the flag “performative”.

Chung denied the charge, arguing that he did not realise it was a Chinese flag.

Magistrate Wong said she did not agree that he did not know the red cloth was the Chinese flag as it was clearly seen being waved by the pro-Beijing camp during the scuffles.

Criminal cases for insulting the Chinese flag were rarely seen in the former British colony, but as tensions over Beijing’s rule have risen so have such incidents.

In April, an air conditioning apprentice was jailed for 20 days for trampling on the flag and throwing it in the bin at an anti-government protest.

And in July, a man was handed a five-week sentence for burning the flag last year.

Chung and three other members of Student Localism were first arrested in July on suspicion of inciting secession on social media.

His bail conditions from that arrest prevented him from leaving Hong Kong.

Chung’s next court hearing on the national security charge is on January 7.