Water from the Fukushima plant has been filtered to reduce radioactivity

Japan will release more than a million tons of treated radioactive water from the stricken Fukushima nuclear plant into the sea in a decades-long operation, reports said Friday, despite strong opposition from local fishermen.

The release of the water, which has been filtered to reduce radioactivity, is likely to start in 2022 at the earliest, said national dailies the Nikkei, the Yomiuri, and other local media.

The decision ends years of debate over how to dispose of the liquid that includes water used to cool the power station after it was hit by a massive tsunami in 2011.

A government panel said earlier this year that releasing the water into the sea or evaporating it were both “realistic options”. 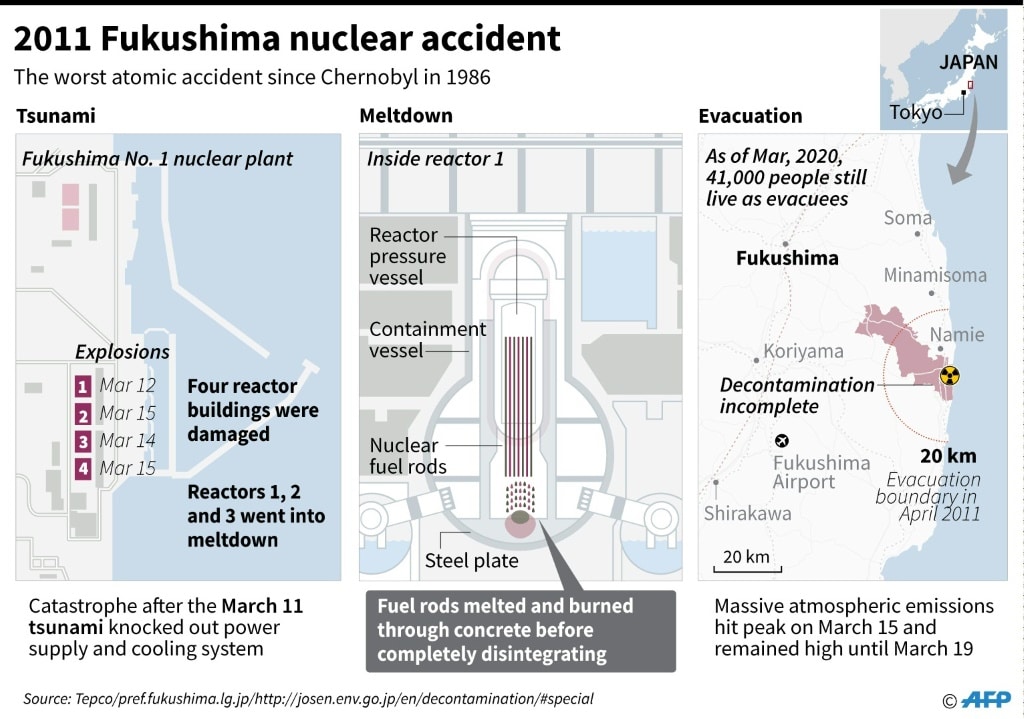 Graphic on the Fukushima nuclear disaster in 2011.

“We can’t postpone a decision on the plan to deal with the… processed water, to prevent delays in the decommission work of the Fukushima Daiichi nuclear power plant,” Chief Cabinet Secretary Katsunobu Kato said Friday, without commenting directly on the plan or its timing.

There are around 1.23 million tonnes of waste water stored in tanks at the facility, according to plant operator TEPCO, which also declined to comment on the reports.

Environmental activists have expressed strong opposition to the proposals, and fishermen and farmers have voiced fear that consumers will shun seafood and produce from the region.

South Korea, which bans imports of seafood from the area, has also repeatedly voiced concern about the environmental impact.

A decision is becoming urgent as space to store the water — which also includes groundwater and rain that seeps daily into the plant — is running out.

Most of the radioactive isotopes have been removed by an extensive filtration process — but one remains, called tritium, which cannot be removed with existing technology.

The expert panel advised in January that discarding the water into the sea was a viable option because the method is also used at working nuclear reactors.

Tritium is only harmful to humans in very large doses, experts say. The International Atomic Energy Agency argues that properly filtered water could be diluted with seawater and then safely released into the ocean.

The Yomiuri reported that the water would be diluted inside the facility before its release, with the whole process taking 30 years.

The treated water is currently kept in a thousand huge tanks at the Fukushima Daiichi site, where reactors went into meltdown nearly a decade ago after the earthquake-triggered tsunami.

Plant operator TEPCO is building more tanks, but all will be full by mid-2022.