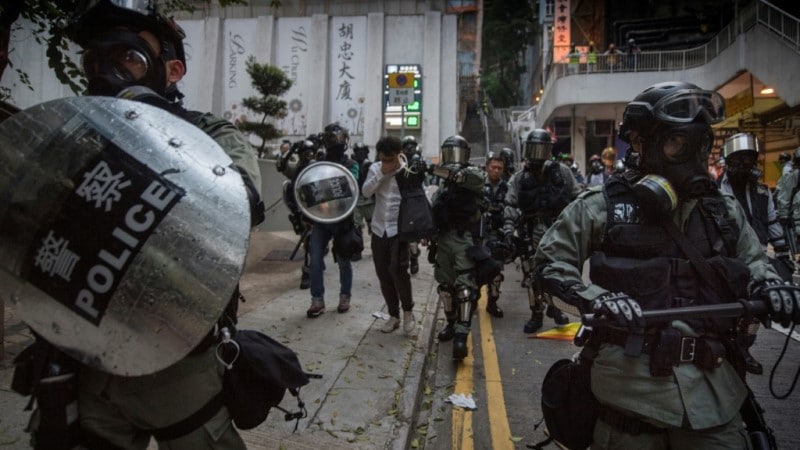 Hong Kong police were wrong to hide identification badges during last year’s democracy protests while the city’s watchdog was “inadequate” for investigating complaints against officers, a senior judge said Thursday.

The ruling is a blow to the city’s pro-Beijing leaders who have defended the police’s actions during the huge and often violent democracy protests and have dismissed calls to overhaul how officers are monitored.

Thursday’s ruling by Judge Anderson Chow in the High Court stemmed from a series of judicial review applications brought against police by multiple parties.

During the months of clashes last year riot police often refused to wear ID badges making it all but impossible to identify officers involved in complaints.

Lawyers for an Indonesian journalist who lost an eye to a police baton round, for example, have complained that they have been unable to identify the officer who fired the shot.

No police officer has been sacked over last year’s protests while the Independent Police Complaints Commission (IPCC) has exonerated the force of any major wrongdoing.

But judge Chow said the police and government breached Article 3 of the Hong Kong Bill of Rights by failing to show identity badges and provide an adequate complaints mechanism.

Article 3 provides that no one shall be subjected to torture or to cruel, inhuman or degrading treatment.

“Even in times of public emergencies, however serious, the rights under (Article 3) must still be respected by the government and protected by the courts,” he wrote.

Public anger towards the police rocketed during the protests and the police said many officers were harassed, often though “doxxing” attacks where personal details are leaked online.

As criticism mounted over the identification badges, police brought in a call sign number system for officers — a move later backed by the IPCC watchdog.

But Chow was critical of that move saying identification “cannot be merely through the internal process of the force”.

“Otherwise, victims of police ill-treatment would be entirely or largely at the mercy of the force.”

Chow also had a blunt assessment of the IPCC, which critics have long described as toothless.

“The existing complaints mechanism… is inadequate to discharge this obligation,” he wrote.

A panel of international experts initially appointed to help the body look into last year’s protests resigned after they said the watchdog did not have the requisite powers to do the job properly.

Chow’s ruling can be appealed by the government.

Judicial reviews have become one of the few avenues for checking government power in Hong Kong.

But in recent months there has been growing calls from the pro-Beijing establishment for the judiciary to be reformed.

Those calls got backing earlier this week from Zhang Xiaoming, a senior official helping Beijing to forge its Hong Kong policies.