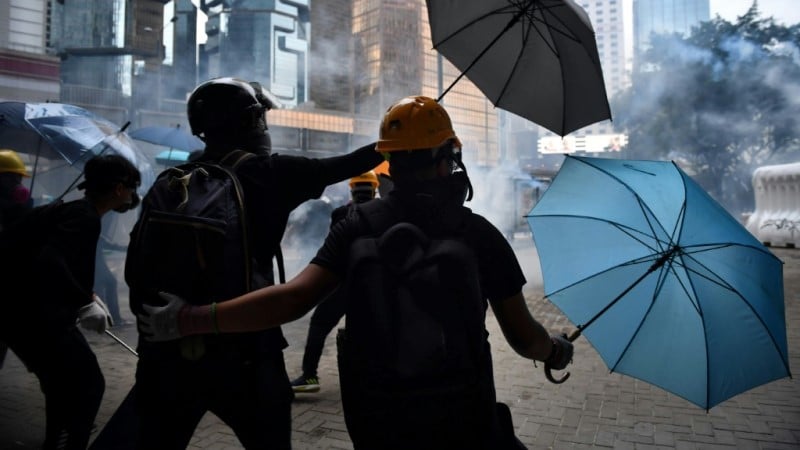 One year on from the start of Hong Kong’s protests, the movement has lost steam

Hong Kong high school student Joseph says he needed 14 stitches to close a head wound caused by police batons during last year’s pro-democracy protests, an experience that fueled his desire to become a lawyer as he tries to sue the force.

The 18-year-old’s injury came from one of the most polarizing nights of the protest movement.

On August 31, after hours of clashes with protesters, riot police stormed a train at Prince Edward subway station and repeatedly clubbed those inside.

Police said frontline protesters were using the station to change out of their black “protest uniforms” to escape being identified.

But the images of terrified people being repeatedly struck were captured on video and fueled hostility towards the police.

“My head wouldn’t stop bleeding,” Joseph said, recalling how he was arrested and then spent 48 hours handcuffed to a hospital gurney while being treated.

He was never charged with any offense.

“I thought police brutality was something on the news or Facebook Live. I’d never imagined that would happen to me, and that the injustices in society would affect me directly,” said Joseph, asking only his first name be used.

He described himself as a moderate protester who attended peaceful marches and eschewed violence, adding that he was making his way home on the subway that night when police rushed in.

Images of the incident often flash through his mind, he said, and when he talks about what happened his heartbeat quickens.

The scars on his head are now hidden by hair, but they serve as a constant reminder. 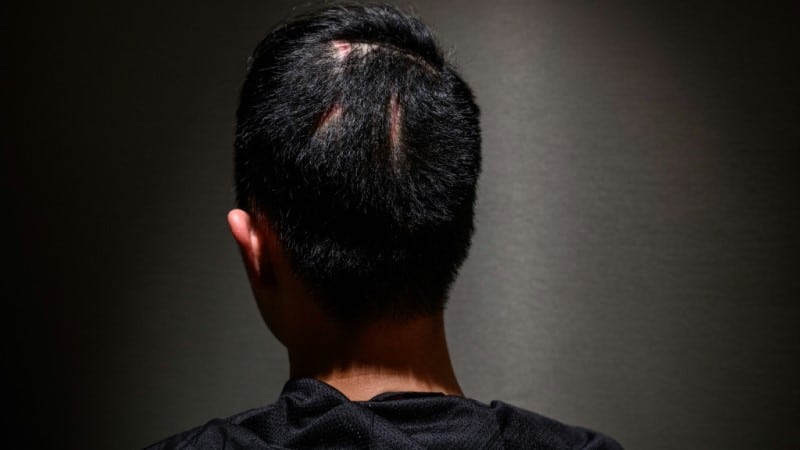 With the help of legal aid and sympathetic lawyers, Joseph has launched a civil suit against the police to claim damages, but has made little headway.

The identities of the officers involved have not been revealed, and the coronavirus outbreak delayed proceedings as courts closed down.

No police officer has faced sanction for their actions that night inside the station — despite images and video circulating widely on the internet.

Police reject allegations of brutality, saying officers deployed appropriate force to meet the tactics of protesters who were becoming increasingly violent after months of clashes.

But rights groups disagree, saying multiple instances of excessive force have been documented against non-violent protesters or people who had stopped being a threat. 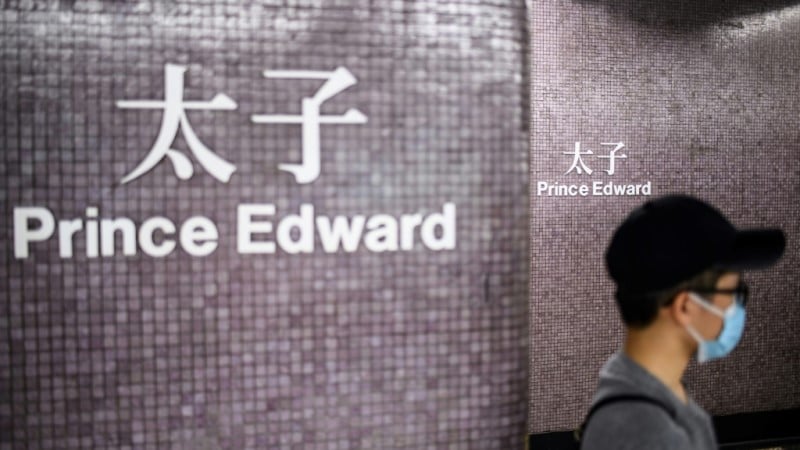 One core demand of the movement has been an independent inquiry into police tactics, something both Beijing and Hong Kong’s leaders have repeatedly rejected.

Last month, the city’s police watchdog cleared the force of any misconduct and no officers have faced major sanction or reprimand over the protests.

Joseph’s experience has since given him a career focus — he has just finished university entrance exams and now hopes to study law.

“After experiencing the movement, I felt like I could do more for society,” he said.

“One year on… police still haven’t been sanctioned and held responsible, but we shouldn’t blot out the possibility that justice can be upheld.” 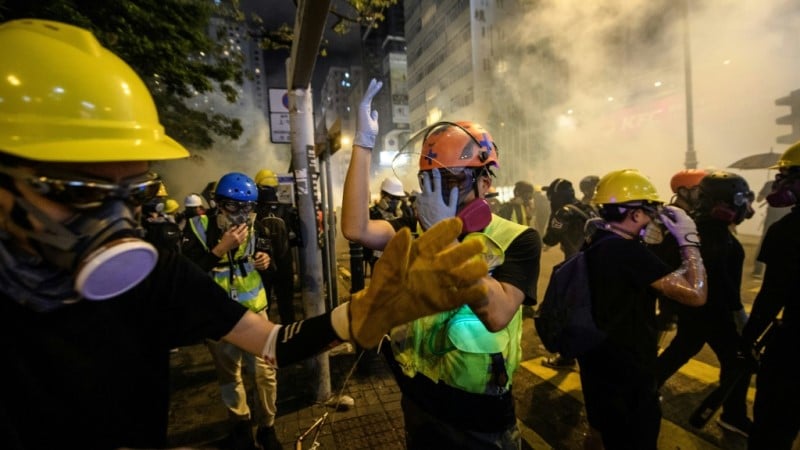 Hong Kong Protests One Year on: The Medic

Nok quit his nursing job to join Hong Kong’s pro-democracy protests full-time as a volunteer medic. A year on, he keeps his equipment on permanent standby, convinced his skills will be needed again in a city still seething with anger.

The 29-year-old, who asked just to use his first name, watched the first huge protest march on June 9 last year on television when he got back from work.

The protests were initially sparked by a plan to allow extraditions to authoritarian China’s party-controlled courts.

There had been smaller gatherings in the months before, but the crowd size on June 9 was enormous, dubbed “the million march” by Hong Kongers.

Three days later, Nok was outside the city’s legislature helping protesters struck by tear gas and rubber bullets as activists battled with police to halt the extradition bill. 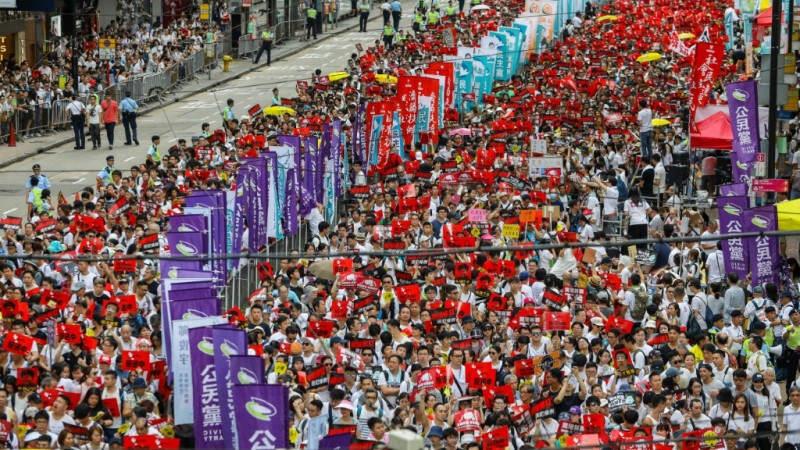 The crowd size on June 9 was enormous, dubbed “the million march” by Hong Kongers

The next protest, four days later, was dubbed “the two million march”.

Soon Nok was part of an organized band of medics at the sidelines of the weekly protests that engulfed the city in what spiralled into an outpouring of popular rage and frustration at Beijing’s rule and the city’s police force.

Many injured protesters avoided going to hospital, fearing arrest if they did, so medics also coordinated treatment at underground clinics with doctors and surgeons sympathetic to the democracy movement.

As the weeks went by, Nok found it impossible to do his day job and attend the protests. So in August, he quit.

“I just didn’t think I could manage to do both. When there is a protest out there, I can’t just ignore it,” he told AFP.

For the next few months he lived off savings and he generated some spare cash by making pro-democracy trinkets. 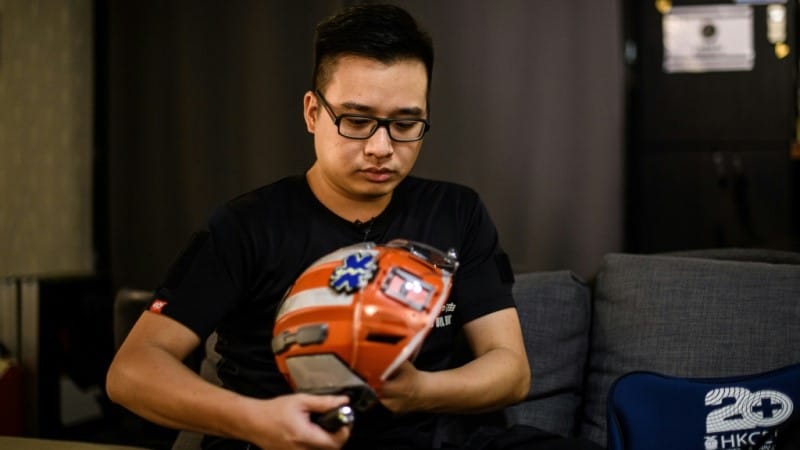 Nok, who quit his nursing job to join the city’s pro-democracy protests as a volunteer medic, says he is ready to return to the streets at any time, keeping his equipment ready

Mass arrests and anti-coronavirus restrictions on public gatherings have largely halted the protests this year.

In recent weeks, renewed clashes have broken out after Beijing announced plans to impose a sweeping national security law over the restless city and last week tens of thousands defied the government to mark the anniversary of the Tiananmen crackdown.

Nok has since restarted work as a carer, a job that gives him more flexible hours — and pays better than nursing.

But he says he is ready to return to the streets at any time, keeping his equipment in a cupboard.

Inside is a yellow hi-vis jacket with the word “Medic” emblazoned on it, a helmet and respirator, a bag stuffed with gauze, bandages, antiseptic creams and the saline used to wash the eyes of those struck by pepper spray and tear gas.

“I’m a professional nurse and I need to give the injured appropriate treatment,” he said as he checked supplies.

Walking through the streets of Tsim Sha Tsui, a shopping district that saw frequent clashes last year, Nok found it hard to work out what, if anything, had been achieved by the protests. 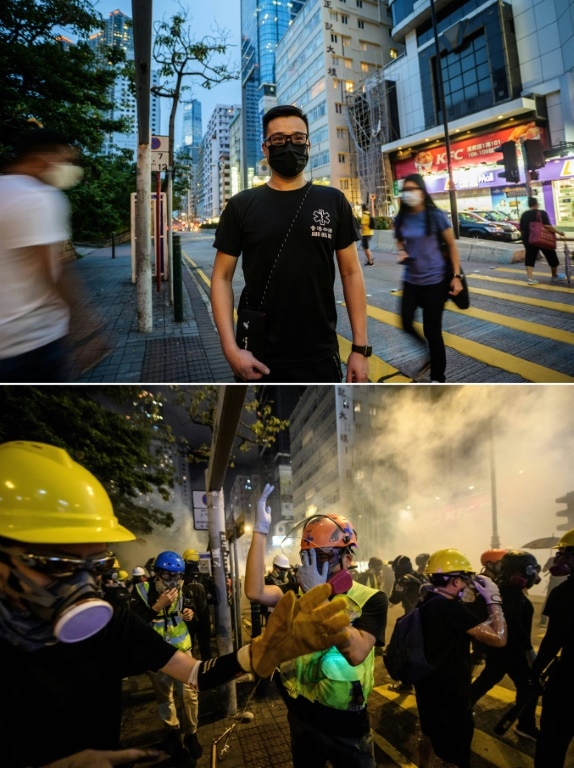 Walking through Tsim Sha Tsui (top), a shopping district that saw frequent clashes last year, Nok found it hard to work out what, if anything, had been achieved by the protests (bottom, Nok in orange helmet)

“Nothing has changed, but I can’t tell whether this is good or not,” he explained.

But with protests against a planned national security law bubbling up once more, he fears history is repeating itself with an unpopular leadership making a fresh bid tighten its grip on dissent.

Over the months, police have taken an increasingly aggressive line towards both the journalists and medics who wear yellow jackets to differentiate themselves from protesters. It is something that unnerves Nok.

“To be honest, I am quite nervous,” he explained. “If you are not their friends, they see you as an enemy”.

But he says many of his old medic friends are ready to take the risk.

“We feel fear, but we choose to face it instead of evading it,” he said. 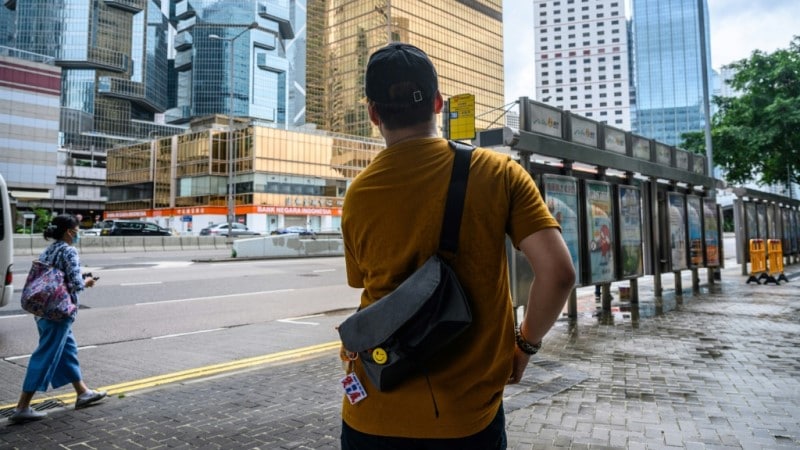 Hong Kong Protests One Year on: The Frontliner

Ryan used to be on the front lines during Hong Kong‘s pro-democracy protests. But a year on he has left the streets, fearful of arrest, wracked with guilt over his departure and despondent for the city’s future.

“I wanted to get away from the political environment,” the 20-year-old bespectacled student told AFP, adding that he has not logged on to the encrypted messaging apps used by protesters for several months now.

When AFP first met Ryan last summer he was a self-declared “charge boy”, one of the frontline protesters forming shield walls against riot police in the weekly battles that swept through a once stable finance hub chafing at Beijing’s rule.

His radicalization was swift.

Like many Hong Kongers, he joined the mass movement after witnessing police use rubber bullets and tear gas in early June against demonstrators outside the city’s legislature who were trying to stop a widely loathed bill that would have allowed extraditions to mainland China’s opaque, Communist Party-controlled courts.

Hundreds of thousands marched in record-breaking rallies that continued for seven straight months and often descended into clashes with police.

Ryan described his embrace of confrontational tactics in unapologetic terms, saying he was “burning with anger” against the police and felt years of peaceful rallies had achieve little in stopping Beijing’s steady erosion of Hong Kong’s freedoms.

During one confrontation, Ryan hobbled away from the streets after he was struck in the leg by a rubber bullet. But he kept coming back out, his parents unaware of what he was up to.

Months later the 20-year-old university freshman cuts a very different figure, saying he can “no longer be a frontline protester”. 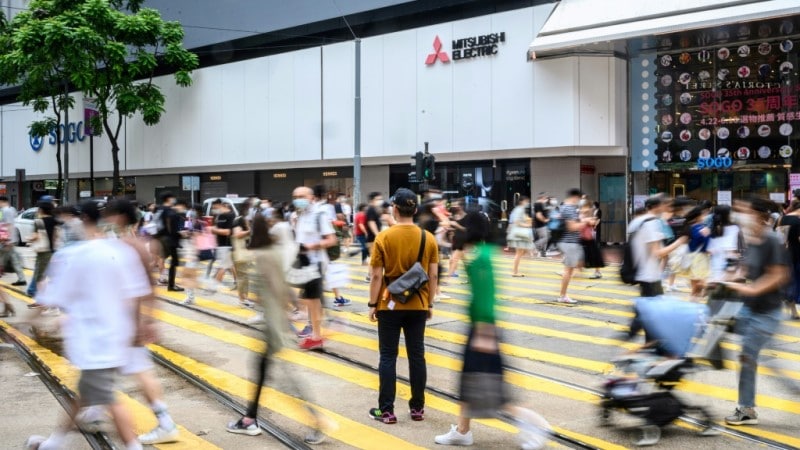 Brush With the Law

In October, Ryan was arrested on a slew of charges including participating in an illegal assembly and assaulting police.

He alleges a group of police officers slapped and kicked him during his detention. Many other protesters have made similar claims but the police have rejected all accusations of abuse or excessive force.

The charges were eventually dropped after a series of court hearings.
But the experience rattled Ryan and he felt like a marked man.

“There’s no way for me to have a catharsis… It only left me with a sense of loss. It also makes me want to give up on this movement,” he explained, asking for just his first name to be used.

Over the last year about 9,000 people have been arrested for taking part in Hong Kong’s pro-democracy protests, with more than 1,700 charged, and the courts are now jammed with prosecutions.

Many of those going to jail are youngsters like Ryan, who now often sits in the public gallery.

“I want to show encouragement and support to those who have been arrested and those who have to go through court proceedings. Because I’ve been through it myself, I understand how you really need the support and care of others,” he said.

During a recent visit to the city’s legislature Ryan’s eyes welled up as he looked at a building now surrounded in barriers after it was breached and trashed by protesters in early July.

Last week the partially elected legislature, which is weighted to deliver a pro-Beijing majority, passed a law banning insults to China’s national anthem.

Beijing has also announced plans for a sweeping new national security law to be imposed on Hong Kong, bypassing the legislature entirely.

Ryan’s backpack sported a key-chain with a popular protest slogan: “Meet again under the drum.”

The drum is the circular chamber where the legislature sits and over the years pro-democracy protesters have held sit-ins outside.

But Ryan finds it hard to imagine a future where similar protests are allowed, especially as anti-coronavirus measures currently restrict more than eight people gathering in public.

“That’s a fairy tale,” he said. “Right now, it’s a problem even if we just want to meet on the streets. Meeting under the drum is just too good to think about but it might become something that will never happen again.”

Ryan knows some fellow protesters will judge him for leaving the movement and he struggles with guilt and doubt.

“I blame myself for selfishness and cowardice,” he said. “I turned silent after being battered. I feel apologetic from my head to my toes. But I just couldn’t do it.”
Yet he also can envisage a time when he might hit the streets once more.

“You could say the temporary drop-out is to prepare for the future.”