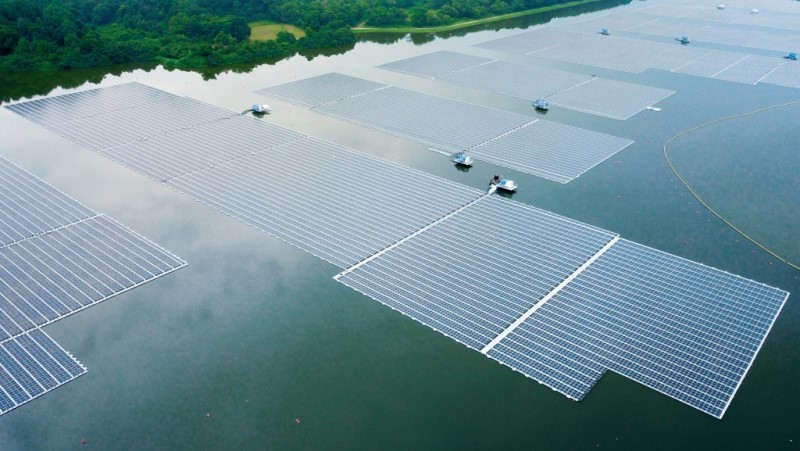 Singapore Wednesday unveiled one of the world’s biggest floating solar power farms, covering an area the size of 45 football pitches, as part of the city-state’s push to cut greenhouse gas emissions.

The project is the country’s most ambitious yet, comprising 122,000 panels on Tengeh Reservoir that will produce enough electricity to run its five water treatment plants.

Singapore is among the biggest per capita carbon dioxide emitters in Asia and its land scarcity makes boosting renewable energy sources a challenge.

The prosperous financial hub has turned to setting up plants off its coasts and in reservoirs, and aims to quadruple solar energy production by 2025.

The new farm can produce up to 60 megawatts of electricity, and will lead to carbon emissions reductions equivalent to removing 7,000 cars from roads, according to Sembcorp Industries and national water agency PUB.

Sembcorp built the project, which covers about 45 hectares (110 acres), with backing from the agency.

Singapore has also built a solar farm in the Johor Strait, which separates the island state from Malaysia, as well as plants on land.

The government in February unveiled a “green plan” that included steps such as planting trees, reducing waste sent to landfills and building more charging points to encourage electric car use.

Singapore has pledged to achieve net-zero emissions “as soon as viable” in the second half of the century.

Critics say the city-state’s goals are behind that of other developed economies, and that it has not gone far enough to achieve its environmental ambitions.