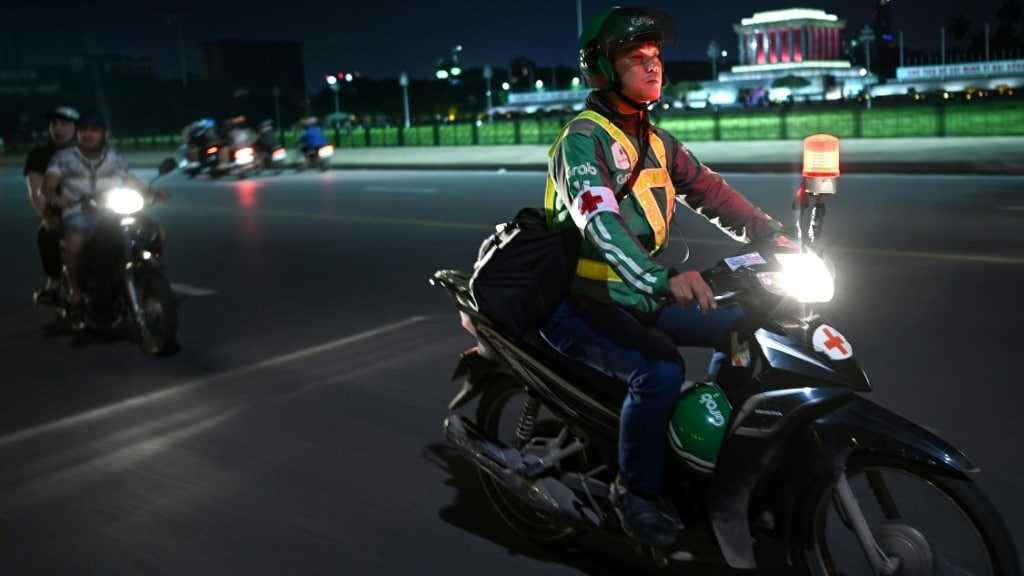 Many of the team have been trained in first aid, largely by Viet at weekly sessions

On the tarmac of a dark Hanoi street, motorbike taxi driver Pham Quoc Viet mops the bloodied knee of a fellow rider, one of the hundreds of traffic victims he’s tended to in the chaotically congested Vietnamese capital.

By day, Viet, 33, works for Southeast Asian ride-hailing firm Grab, scooting along the tree-lined boulevards and winding alleys of the city.

But from 9.30 pm until 1.30 am, he is an unofficial emergency responder, a red flashing light secured to his handlebars as he patrols the streets on two wheels.

“When I first came to Hanoi to work, I thought about what I could do to help those I saw injured in accidents,” said Viet, who moved to the city in 2017.

The year before, he had been involved in a serious motorbike crash that saw him sprawled on the roadside, glimpsing passers-by too afraid to come to his aid. 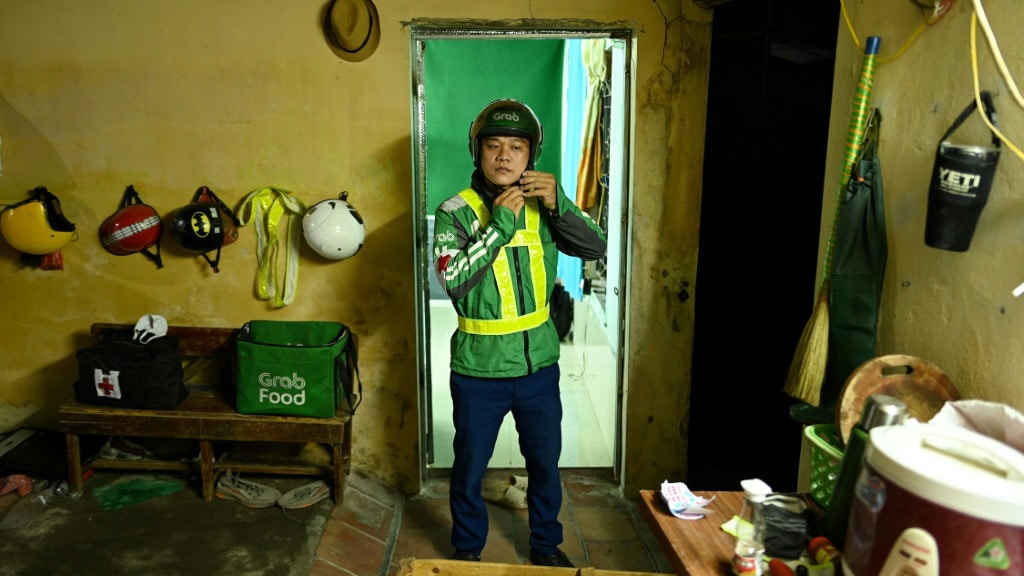 By day, Pham Quoc Viet works for ride-hailing firm Grab but at night he is an unofficial emergency responder

“I remember that desperate feeling when someone walks on by… I didn’t want anyone else to get into the same situation and feel abandoned,” he told AFP.

There are six million motorbikes in Hanoi, their dominance and numbers so great that pedestrians struggle to cross roads and minor scrapes are an everyday hazard.

Although more serious accidents are now relatively rare in the capital, victims often face a challenging wait for help as congestion blocks the path of medics and fear of litigation prevents onlookers from offering a hand.

After starting his rescue work alone, Viet now has a team of close to 50 volunteers, most of whom work in Hanoi.

Two-thirds are ride-hailing drivers, but there are engineers, mechanics and students too who form a network of eyes on the ground and social media. 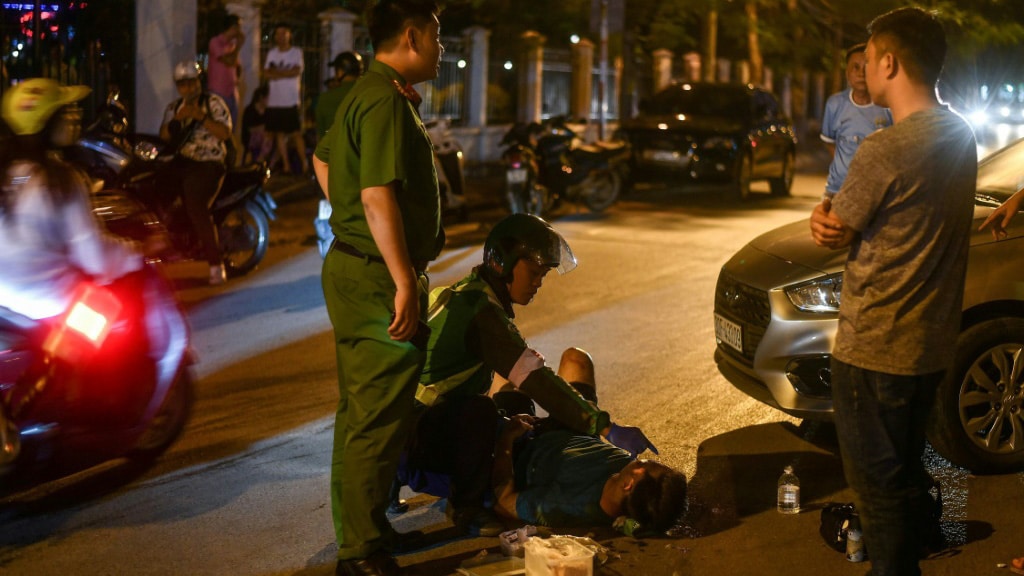 Although more serious accidents are now relatively rare in the capital, victims often face a wait for help as congestion blocks the path of medics

Many of the team have been trained in first aid, largely by Viet at weekly sessions, and they keep each other up to date via Vietnamese messaging app Zalo.

Nguyen Le Giang, 34, who worked in a textile workshop before starting as a Grab bike driver three years ago, pushed her husband and mother to help around the house and with caring for her two children so she could join the nightly patrol.

“The first time I gave first aid I was a bit scared,” she said. “The man told me his foot was painful but there was no blood and the bone wasn’t broken. He could not stand up or walk, though.

“I hadn’t seen anything like that before so I had to make a video call to Viet.” 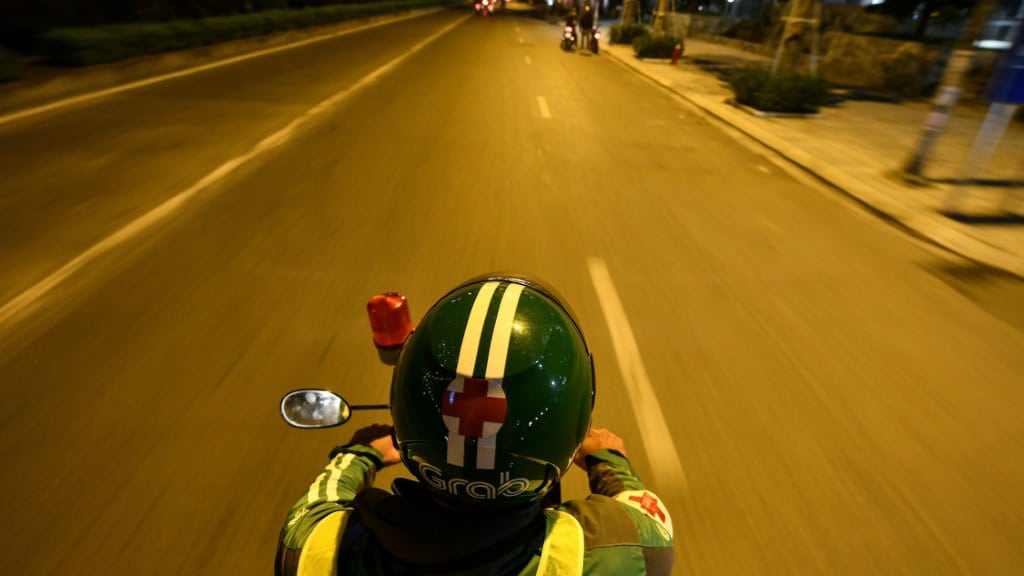 There are six million motorbikes in Hanoi, their dominance and numbers so great that pedestrians struggle to crossroads and minor scrapes are an everyday hazard

Viet and his team are currently helping around 100 people a month, with each member spending up to $2 daily on equipment such as bandages, usually around a 10th of their income.

Although Hanoi’s streets are once again bustling after a weeks-long social isolation order was lifted at the end of April, ride-hailing drivers suffered considerably during the pandemic.

“We earnt much less money… it was very difficult but all of us have overcome it,” said Viet, explaining that most continued to patrol and buy supplies despite their reduced income.

And there was no discrimination when it came to who they treated.

“Some members asked me ‘if the injured are not motorbike taxi drivers, why should we care about them?’ I told them: ‘Imagine those people were your relatives, your friends, would you still say that?'”