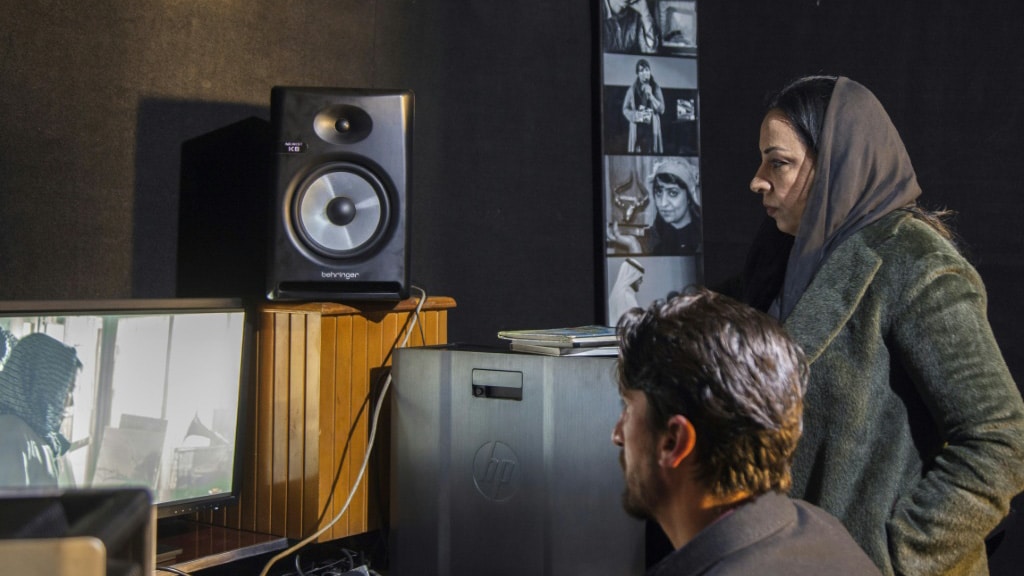 For a generation, filmmaker Roya Sadat has been a voice for Afghan women in one of the world’s worst places to be one

For a generation, Roya Sadat has been a voice for Afghan women in one of the world’s worst places to be one.

One of the first female filmmakers to make her name after the fall of the Taliban in 2001, she has won plaudits at home and abroad for works such as “A Letter to the President”, and “Three Dots”, and “Playing the Taar”.

She has lived through the Soviet occupation — fleeing with her family for their lives at times — endured the brutality of civil war, and then the violent oppression of Taliban rule, where women existed only in the shadows and basic freedoms were lost.

Her great fear is a return to that kind of fundamentalism: The February 29, US-Taliban deal may be a potential first step for peace in a nation that for decades has only known war, but it offers no guarantees the few women’s rights set out in the current constitution will be upheld.

“I feel concerned when I remember how we had simply been forgotten during the five-year Taliban rule until 9/11 happened,” says the 37-year-old, adding: “If the international community approaches [Afghanistan] as an open and shut scenario and abandons us again, there will undoubtedly be grave consequences.”

Almost 39 percent of girls go to secondary school according to World Bank figures for 2017, while USAid says that of the 300,000 students in universities, around one third are female citing figures from the Afghan Ministry of Higher Education.

These figures are predominantly for urban areas but twenty years ago it would have been all but impossible everywhere.

“There are many good changes happening, coming from the heart of society,” Sadat says, but concedes there is a huge amount to be done.

Afghanistan ranks last in the Georgetown Institute for Women, Peace and Security index which measures well-being and self-reliance. In rural areas, female literacy can be less than two percent and rights are often even more constrained by conservative tradition. 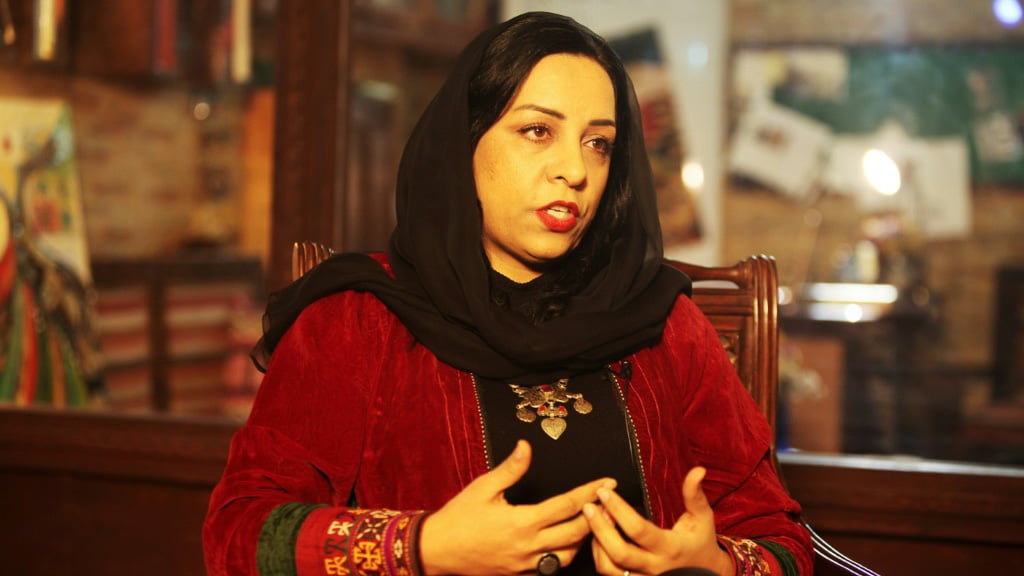 Hailed by the US for refusing to be silenced in the face of threats from conservatives about her work, Afghan filmmaker Roya Sadat was given the International Woman of Courage Award in 2017

She is not alone in fearing that the small inroads made in women’s rights may disappear — in urban centers young people have grown up listening to music, watching television, and more recently accessing the internet and social media. Many have only seen the Taliban on the news.

Sadat, who has been writing stories, poems and plays since she was a little girl, recalls how her life ground to a halt in 1996 as the Taliban rolled in.

Schools closed, women were confined to their homes, the televisions and radios stopped playing.  A precocious teenager she continued to write indoors, and read books on directing from her father’s collection.

She was allowed to work as a nurse as women could only get female medical help, and even set up clandestine cultural performances of her plays in the hospital, even though the head of it was linked to the Taliban.

“It was very dangerous. I still find it hard to believe that we were able to,” she says.

Her first work, “Three Dots”, which tells the tale of a single mother who is forced to marry a warlord and become a drug smuggler, was penned during this period, but only made — using simple equipment — once the regime changed and she could channel all the knowledge accrued from surreptitious reading, into real world creativity.

This determination and persistence has defined her career, and she feels strongly that film has a social purpose.

The mother-of-two explains: “I turned to cinema, when I had just come out of an era of suffocation, and had a world to express”.

“I strongly believe in cinema and that this is the most important art that can influence a positive change in our society. But change cannot come overnight. The change has to come to the thoughts and minds of people.” 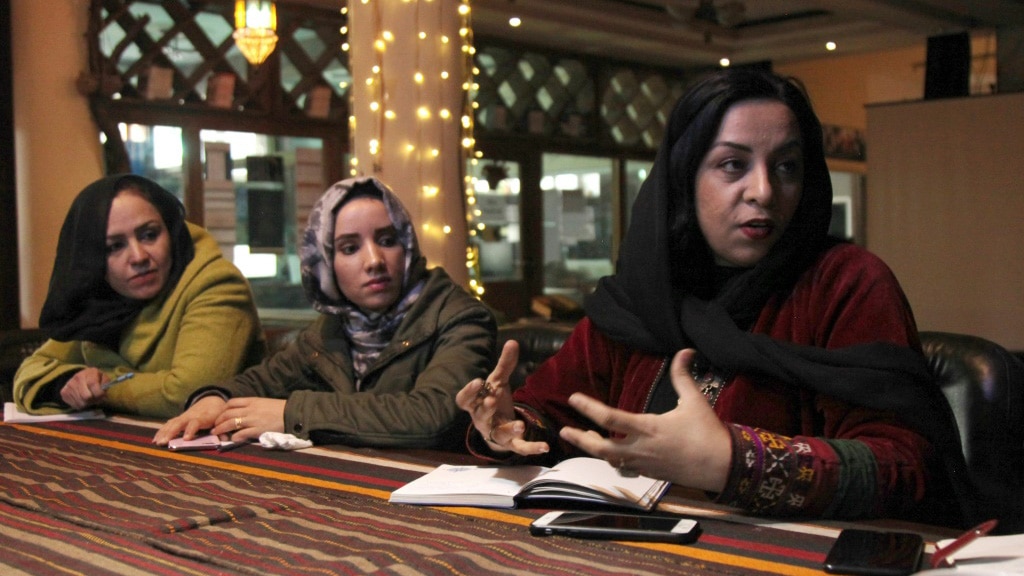 Afghan film producer and director Roya Sadat has been writing stories, poems and plays since she was a little girl, and recalls how her life ground to a halt in 1996 as the Taliban rolled in

Refuse to be Silenced

In her twenties she set up an independent film company — Roya Film House with her sister Alka, and was awarded a scholarship to study film in South Korea. She has also written television dramas for prominent media firm Moby Group.

Her stories are the stories of Afghan women.

From the outset of her career she has faced questions from her family and criticisms from the community, but she argues that when locals come to see her work — they understand.

Her 2017 film “A Letter to the President” shows a woman slapping back at her violent husband when he hits her, before accidentally killing him.

Sadat depicted an act of female rebellion in a country where women are often forced to stay in abusive marriages, but recalls how she expected a “bad reaction” because of the taboos surrounding female behavior. Instead the audience applauded during the slap scene.

Her work is not without risks.

Cinema remains contentious in parts of the country, and her productions, which shine a light on female inequality and repression, controversial.

Hailed by the US for “refusing to be silenced” in the face of threats from conservatives, she was given the International Woman of Courage Award in 2017.

She’s committed to supporting the next generation of female filmmakers: the latest edition of her International Women’s Film Festival in Herat, which first launched in 2013, received more than 2,500 submissions.

She remains hopeful that she can continue to challenge and speak for Afghans, arguing that film is uniquely placed to change hearts and minds.

She explains: “Cinema can challenge inequality and injustice, it can turn social taboos into discourse, and it can invite people to dialogue.”

She adds: “Our people need to criticize themselves, to talk about things that are forbidden. I believe that this society needs a revolution of thought and this cannot be done except with the help of cinema.”