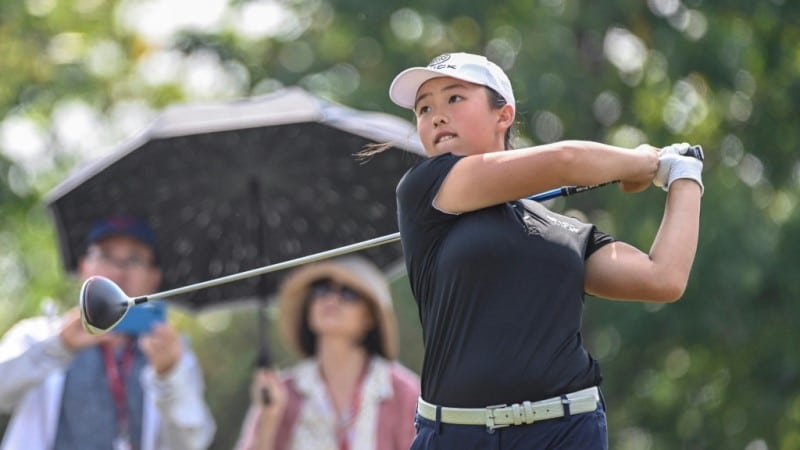 The Asian Golf Industry Federation called it “one of the most astonishingly successful starts to a professional golfing career”.

Yin completed her hat-trick of triumphs, which have all come on the China LPGA Tour, with a one-stroke victory earlier this month at the Orient Masters in Xiamen.

“The former China national amateur representative is believed to be the first player to post three straight wins to start a pro career,” said the Singapore-based federation. 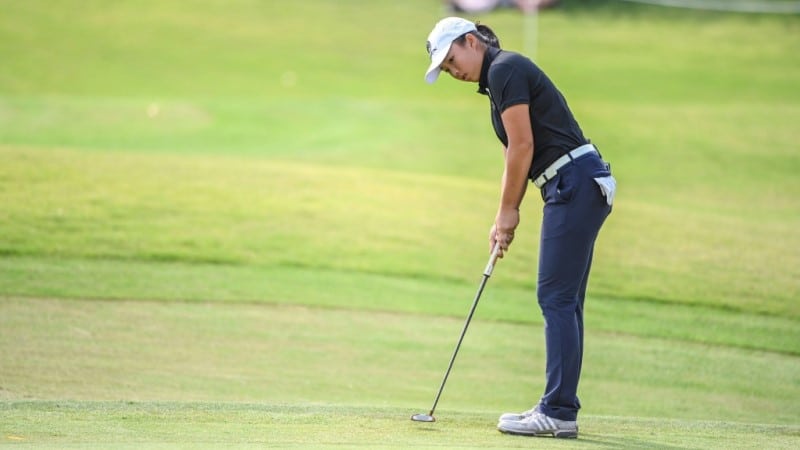 High ambition: Yin Ruoning, 17, wants to play on the US LPGA Tour and become world number one after winning her first three events as a professional

For Yin, who turns 18 at the end of this month and playfully describes herself as “cute”, she hopes this is only the beginning.

She is now at 302 in the world rankings, having been 503rd earlier this year, and is aiming high.

“Yes, definitely,” the Shanghai-based rising star told AFP unflinchingly in English, when asked if becoming the top women’s golfer on the planet is her ultimate ambition.

It has been a life-changing few months for Yin, who as an amateur won a bronze medal in the women’s team event with China at the 2018 Asian Games.

She won the China LPGA Tour Qualifying Tournament in January this year and turned professional in March, but by then the coronavirus pandemic had put all sport in China on hold.

The domestic golf circuit resumed last month and Yin picked up where she left off, racking up three wins in quick succession.

“That surprised me, I didn’t think that much that I could win (even once), I did not even think about it,” said Yin, who was born in the southwestern city of Kunming.

Men’s and women’s golf is littered with prodigious talents who burst onto the scene as teenagers, only to disappear into obscurity.

In 2013, Yin’s compatriot Ye Wocheng created history by becoming the youngest golfer to qualify for a European Tour event, aged just 12. He has hardly been heard of since.

Guan Tianlang famously made the cut in the 2013 US Masters as a 14-year-old. He has just finished college in the US and now aims to qualify for the third-tier PGA Tour-Series China.

Now 23, Ko has struggled to hit the same heights in recent years, winning only won one event since she held last held top spot at the beginning of 2017.

China, where golf was banned under Mao Zedong because it was deemed a sport for the rich, has a growing pedigree in the women’s game.

In 2017, Feng Shanshan became the first Chinese, man or woman, to reach world number one.

Yin is nowhere near those heights yet, but is beginning to make headlines, and with it comes expectation.

“I think there will be some pressure but it gives me a lot of motivation also,” said Yin, who plays basketball and video games in her down time.

Yin’s interest in the sport stems from her father, a keen golfer, and she started playing when she was 10.

She now practices six days a week — with Mondays off — and about five hours a day.

Her swing coach is American former player Jim Johnson and she also has a fitness trainer.

Yin plans next year to compete in the US LPGA Tour qualifying school with the aim of earning a card to play on the elite women’s professional circuit.

She models her attitude and game on Collin Morikawa, the 23-year-old American who won his first major at the US PGA Championship last month.

“I like the way he plays, he’s not a long driver but he’s very stable, and I like his passion for the game,” said Yin.

“By the way,” she adds with a teenage giggle. “His smile is so sweet.”