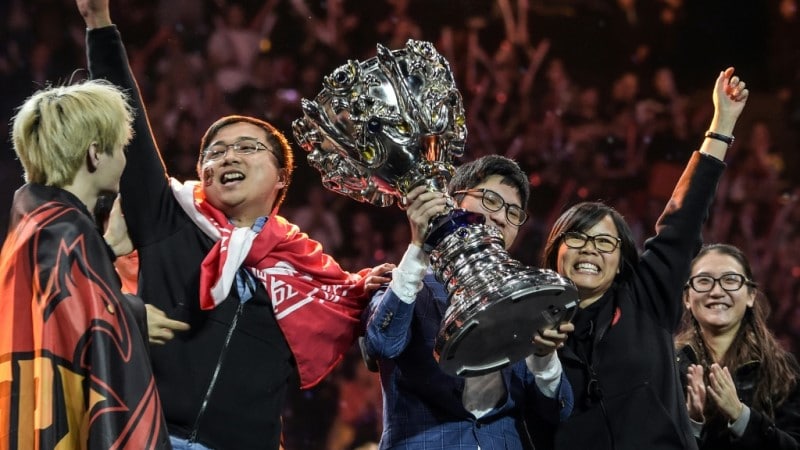 And while events that are taking place often do so behind closed doors, the October 31 finals of the League of Legends worlds will be in front of more than 6,300 spectators.

League of Legends is a massively popular multiplayer online battle arena game and the world title is one of the biggest prizes in professional gaming.

There were 3.2 million applications for tickets for the championship decider at the end of this month at the new Pudong Football Stadium — the arena’s maiden event. 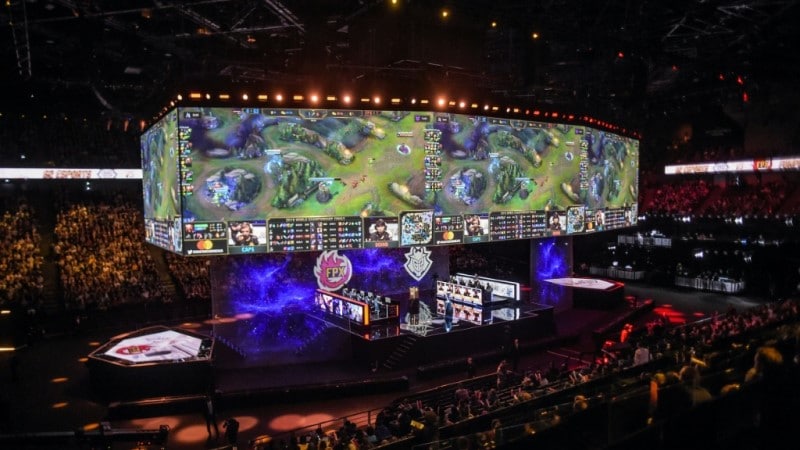 Team Europe (right) and Chinese team FPX (left) compete in the 2019 League of Legends world final in Paris. This year’s event will be held later this month in Shanghai, bucking a grim trend of cancellations because of the coronavirus pandemic

It can hold more than 30,000 but the attendance is limited to ensure social distancing.

Organizers anticipate that more than 100 million unique viewers online will watch the finals, which come after many sports competitions have been canceled or postponed in virus-hit 2020, including the Tokyo Olympics.

The tournament has a minimum prize pool of $2.225 million but the final figure is likely to be far higher. In 2018 it eventually totaled nearly $7 million.

The staging of the championship is partly a reflection of how China, where coronavirus emerged late last year, has successfully got to grips with the deadly disease.

“Firstly the (coronavirus) situation in China is contained and safe,” said Wensen Zeng, China eSports development lead at Riot Games, the developer of League of Legends.

“Secondly, you have to get the teams’ support. All the participants were willing to come,” he added, asked how they put a world championship on in the middle of a pandemic.

It is now at the semi-final stage, but the tournament started out last month with 22 teams from all over the world.

Getting 400-500 people into China was a huge logistical challenge.

There were visas to be arranged and coronavirus tests to be taken before arrival, while international air travel remains badly disrupted.

Two teams, both from Vietnam, failed to make it.

“It is indeed the toughest situation we’ve ever encountered,” said Zeng, crediting Chinese authorities for helping to get the tournament on in the most trying of circumstances.

The championship takes place despite China saying in July that it would not hold most international sports events for the rest of the year, with Formula One and major tennis and golf tournaments all canceled in Shanghai.

Original plans for a more expansive worlds in China this year were torn up late on because of the virus, said Toby Zhang of Shanghai-based TJ Sports, which is helping to run the tournament.

“At the beginning we wanted to really establish a big-scale worlds event in China, so we would play a multiple-city roadshow and have different stages taking place in different cities,” said Zhang.

“But we made a decision to pivot and host everything in Shanghai only in June or July.”

After arriving in Shanghai, which aspires to be a global eSports capital, players and staff had to quarantine for two weeks, in line with all people landing in China from overseas.

Organisers laid on equipment so players could spend the time practising, said Zhang.

After that, everyone was moved to a luxury hotel and asked to spend another week in isolation to ensure there were no infections.

Players are not in a complete “bubble” in the hotel, but they have been told to avoid busy places.

They are barred from the competition venue if their daily temperature check is above 37.3 degrees Celsius (99.1 F), said Zhang.

For the last remaining two teams, their players will have had four or five coronavirus tests during the tournament, plus three more mandated by the government, said Riot Games’s Zeng.

“We’re just trying to be overly conservative to ensure that nothing (no virus outbreak) will happen,” he added.