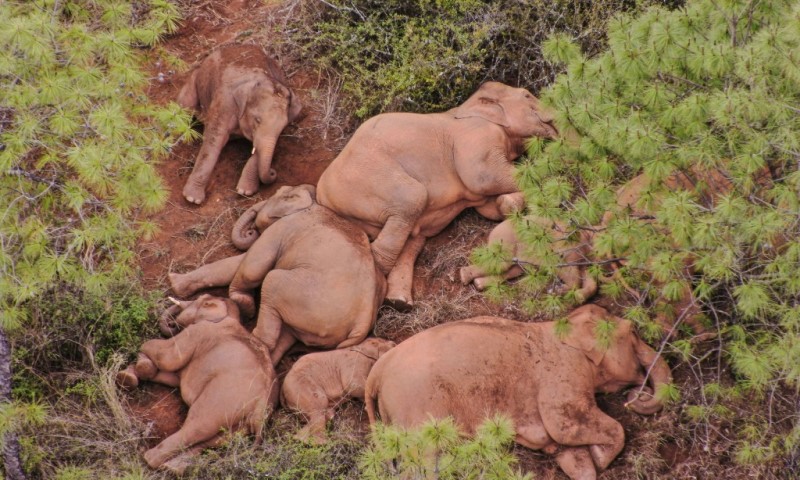 A heavily injured baby elephant left behind by a migrating wild herd in southwest China has been rescued, state media reported Tuesday, the latest twist in a chaotic odyssey.

The herd of Asian elephants has spent months roaming across Yunnan province, traveling more than 500 kilometers (310 miles) from their home nature reserve in one of the longest ever animal migrations of its kind in China.

Since setting off last year, the meandering mammals have stolen villagers’ food and trampled crops worth over $1 million, with thousands of residents evacuated from their path.

Locals sighted the baby elephant — weighing 180 kilograms and born on the lumbering trek — alone on a tea plantation Saturday morning, struggling with an infected injury on its leg.

The elephant’s wound could have been life-threatening if authorities hadn’t arrived and given treatment, state broadcaster CCTV reported.

“We gave it anti-bacterial and anti-inflammatory drugs, because its wound still looks pretty bad,” Bao Mingwei, director of the Asian Elephant Breeding and Rescue Center, told CCTV, adding that with a longer period of care it should be able to fully recover.

“It’s possible that something like rattan spines pricked it and the injuries slowly became infected.”

State media footage showed around a dozen rescuers and police surrounding the animal in a rainforest clearing, as they tied its thrashing limbs with rope and loaded it into a van.

The elephant was then driven 100 kilometres to a rescue centre.

Last week, a 10-year-old male elephant who broke away from the herd a month ago was captured and returned to a nature reserve.

Scientists are still baffled by what prompted the elephants to leave their home at the Xishuangbanna National Nature Reserve, on the border with Laos.

But their mammoth trek has helped highlight habitat loss and conservation challenges in one of the few places in the world where wild elephant numbers are on the rise.

China’s wild elephant population has doubled to over 300 in the past three decades — but their habitats have shrunk by nearly two-thirds over the same period.