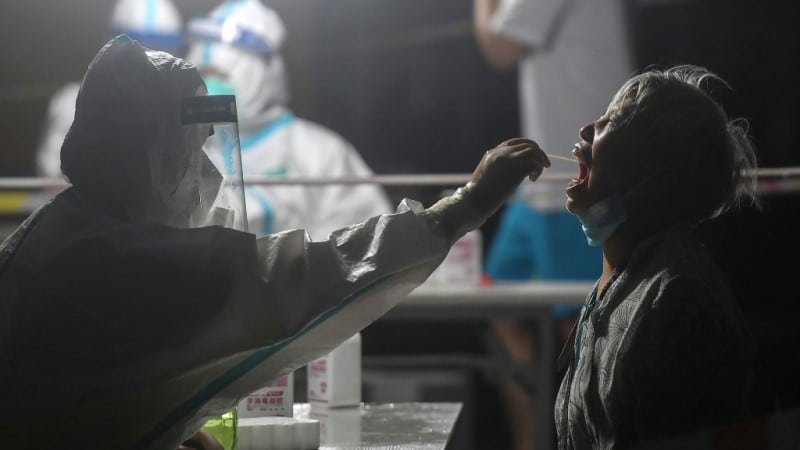 A Covid-19 test in administered on August 11 at a residential area in Wuhan, in China’s central Hubei province

The WHO on Thursday urged China to share raw data from the earliest Covid-19 cases to revive the pandemic origins probe — and release information to address the controversial lab leak theory.

The World Health Organization stressed it was “vitally important” to uncover the origins of the worst pandemic in a century, which has killed at least 4.3 million people and battered the global economy since the virus was first detected in the Chinese city of Wuhan in December 2019.

In the face of pushback from Beijing, the UN health agency called for the provision of “all data and access required so that the next series of studies can be commenced as soon as possible”.

After much delay, a WHO team of international experts went to Wuhan in January 2021 to produce a first phase report, which was written in conjunction with their Chinese counterparts.

It said the virus jumping from bats to humans via an intermediate animal was the most probable scenario, while a leak from the Wuhan virology labs was “extremely unlikely”.

However, the investigation faced criticism for lacking transparency and access, and for not evaluating the lab-leak theory more deeply — with the United States upping the pressure ever since.

A WHO call last month for the investigation’s second stage to include audits of the Wuhan labs infuriated Beijing, with vice health minister Zeng Yixin saying the plan showed “disrespect for common sense and arrogance towards science”.

In a statement on advancing phase two of the studies, the WHO insisted the search was not “an exercise in attributing blame” or political point-scoring.

“The next series of studies would include a further examination of the raw data from the earliest cases and sera from potential early cases in 2019,” the UN agency said.

“Access to data is critically important for evolving our understanding of science.”

The WHO said it was working with several countries that reported detection of SARS-CoV-2 in samples from 2019 stored biological specimens.

For example, it said, in Italy, it had facilitated an independent evaluation by international laboratories, which included the blind retesting of pre-pandemic blood samples.

“Sharing raw data and giving permission for the retesting of samples in labs outside of Italy reflects scientific solidarity at its best and is no different from what we encourage all countries, including China, to support so that we can advance the studies of the origins quickly and effectively,” the WHO said.

After reading the phase one report, WHO chief Tedros Adhanom Ghebreyesus concluded that the probe into Wuhan’s virology labs had not gone far enough.

Long derided as a right-wing conspiracy theory and vehemently rejected by Beijing, the hypothesis has been gaining momentum.

It was a favorite under former US president Donald Trump, but his successor Joe Biden is also keen to see this line of inquiry pursued.

“China and a number of other member states have written to WHO regarding the basis for further studies of the SARS-CoV-2 ‘lab hypothesis’,” the WHO said.

“They have also suggested the origins study has been politicized, or that WHO has acted due to political pressure.

“In order to address the ‘lab hypothesis‘, it is important to have access to all data and consider scientific best practice and look at the mechanisms WHO already has in place.”

It added that analyzing and improving lab safety and protocols “including in China, is important for our collective biosafety and security”.

Meanwhile Danish scientist Peter Ben Embarek, who led the international mission to Wuhan, said a lab employee infected while taking samples in the field falls under one of the likely hypotheses as to how the virus passed from bats to humans.

He told the Danish public channel TV2 that the suspect bats were not from the Wuhan region and the only people likely to have approached them were workers from the Wuhan labs.

He also revealed that up until 48 hours before the end of the mission, the international and Chinese scientists still could not even agree on mentioning the lab theory in the report.