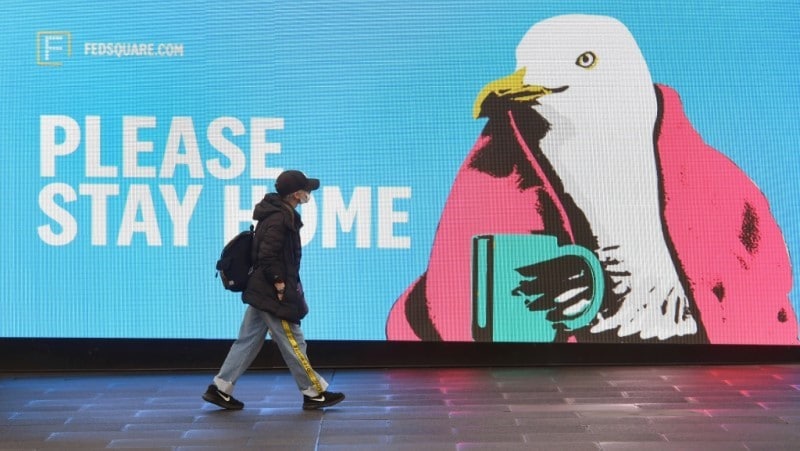 A woman walks past a sign urging people to stay home in Melbourne, which is under lockdown as the city battles an outbreak of the coronavirus

Australian police on Thursday defended arresting a pregnant woman in her home for a Facebook post promoting a rally against virus lockdowns, as footage of the incident went viral and triggered a civil liberties debate.

The livestreamed video shows officers handcuffing the woman in front of her two children and has racked up millions of views online.

The woman Zoe Buhler, told local media Thursday that she had posted the protest plans without knowing it was illegal in the locked-down state of Victoria, which is battling a major outbreak of Covid-19.

Buhler, whose Facebook page is awash with posts arguing against lockdowns and some even labeling the virus a hoax, described her actions as a “bimbo” moment.

“I am just a passionate person and I am sick of the lockdowns,” Buhler said.

Australia has moved to arrest activists who organise demonstrations defying a ban on mass gatherings to try to control the spread of the virus.

Victoria is currently trying to bring its second wave of Covid-19 infections under control with a mix of lockdowns and stay-at-home orders.

The video shows police telling the incredulous and distraught woman — who is still in her pyjamas — that she is under arrest “in relation to incitement”.

“Excuse me, incitement for what? What the… what on Earth?” she asks the officers, instructing someone to film what is happening.

“I have an ultrasound in an hour,” she remonstrates, as she is read her rights and becomes tearful.

The footage has prompted a civil liberties debate in Australia, with critics from across the political spectrum voicing concerns about the balance between rights and obligations.

“The prospect of pre-emptive arrest and the laying of criminal charges to prevent engagement in peaceful protest is a disturbing development,” Liberty Victoria said.

Conservative pundits, politicians and conspiracy theorists — who have continually criticised virus restrictions in the country — seized on the video as evidence of what they called a “police state” in Victoria.

The arrest is the latest in a string of confrontations between police and anti-lockdown activists ahead of a planned protest in Melbourne, which remains under lockdown.

Victoria Police assistant commissioner Luke Cornelius stood by the officers’ actions and said authorities had been clear about their ban on public protests.

“I mean the optics of arresting someone who’s pregnant is terrible,” Cornelius said.

But Australians inciting protests during a pandemic were being selfish and their actions threatened the state’s recovery, he added.

People would “have to have been on Mars” not to know the rules were in place, the assistant commissioner said.