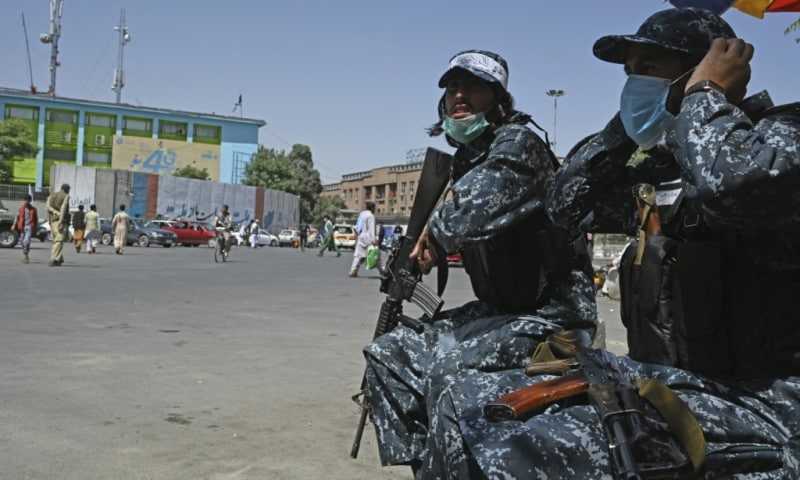 Taliban fighters stand guard along a street in Kabul on September 9, 2021, as Afghanistan faces an economic crisis with its access to cash and aid cut off

With the Taliban in control and foreign aid blocked, Afghanistan’s economy is likely to contract sharply as it faces a shortage of cash, the nation’s former central bank chief said Friday.

“I don’t want to say economic collapse, but I think it’s going to be (an) extremely challenging or difficult economic situation,” Ajmal Ahmady said, predicting GDP would shrink by 10 to 20 percent.

Ahmady, who fled the country just after Kabul fell to the Taliban in mid-August, said international sanctions that block aid funding and restrict access to $9 billion in reserves also could create a shortage of domestic currency.

“Obviously, the access to dollars is going to be severely curtailed. But there’s also the question of local currency afghanis” since the country has no local printing press, he said in a discussion hosted by The Atlantic Council.

The central bank was expecting a shipment of two billion afghanis from a Polish firm, and had signed a contract for another 100 billion from a French company, but it is unlikely they will be able to deliver the bills, Ahmady said.

Amid the cash crunch, “You’re going to see the currency depreciate (and) inflation rise because we import significant amounts of food,” he said.

“I think that’s going to be another constraint for the Taliban regime.”

Even before the collapse of the civilian government, Afghanistan “was already facing a triple shock” of the Covid-19 pandemic, a regional drought and the ongoing conflict.

Most of the country’s reserves are held in the United States, which is keeping them out of reach of the Taliban, while the IMF and World Bank have frozen any lending programs with the country.