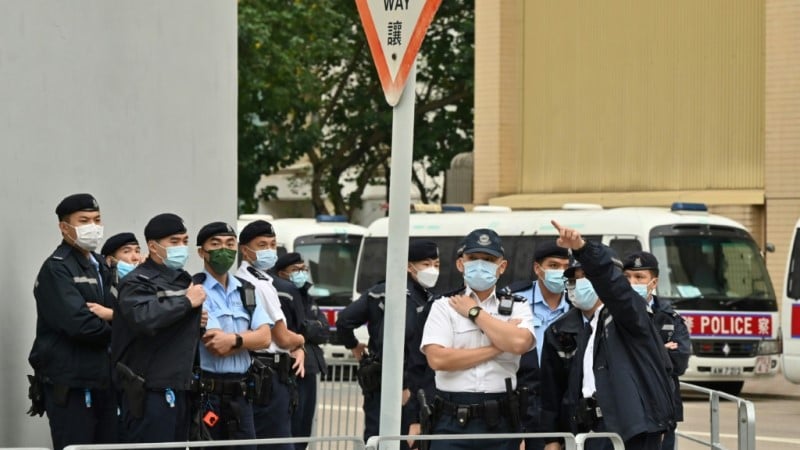 Eight Hong Kongers who were part of a group of democracy activists that failed to flee the city by speedboat last year were handed back to authorities on Monday after serving jail sentences in mainland China.

Dubbed by supporters as “The Hong Kong 12”, the group was picked up by Chinese coast guard last August as they tried to make a break for nearby Taiwan.

Those on board were being prosecuted for actions linked to 2019’s huge and often violent democracy protests.

The charges they faced ranged from rioting and attempted arson to possession of offensive weapons and making explosives.

The group disappeared into the mainland’s opaque judicial system after their capture and were eventually convicted behind closed doors for crossing China’s border illegally.

On Monday, eight of them were handed over to Hong Kong police having completed their sentences.

“They have been deported in batches on the day in accordance with the law,” police in Yantian, the mainland district where the group were jailed, said in a statement.

Hong Kong police confirmed their return in a separate statement.

Images published by local media showed some of those being returned had black hoods placed over their heads as they were marched by officers into a Hong Kong police station close to the border with the mainland.

Among those returned into Hong Kong custody on Monday was Andy Li.

Before he fled, he was arrested under a sweeping national security law Beijing imposed on Hong Kong last year.

More than 100 people have been arrested under the law which carries up to life in prison.

Another of the returned fugitives is a dual national with Hong Kong and Portuguese citizenship.

Two teens in the group — a 16- and 17-year old — were returned to Hong Kong last December.

The two remaining members of the group were given longer sentences for organizing an illegal border crossing and remain in prison on the mainland.

They all now face a restart to their prosecutions in Hong Kong and are likely to remain detained.

More than 10,000 people were arrested during Hong Kong’s democracy protests and the courts are filled with prosecutions.

China has responded to the rallies with a sweeping crackdown, including the national security law and a newly unveiled plan to rid the city’s political scene of anyone deemed unpatriotic.

The capture of the speedboat fugitives became something of a cause celebre among democracy supporters who fear the mainland’s authoritarianism is now enveloping Hong Kong.

Authorities did not initially confirm the group’s capture and family members said they struggled to reach the detainees.

Lawyers who were appointed by the families were routinely denied access, two of whom were later disbarred.

Conviction in China’s party-controlled courts is all but guaranteed in criminal cases and the eventual trial took place behind doors over a single day.

Semi-autonomous Hong Kong maintains a western-style common law judicial system although the security law has begun to transform that tradition.