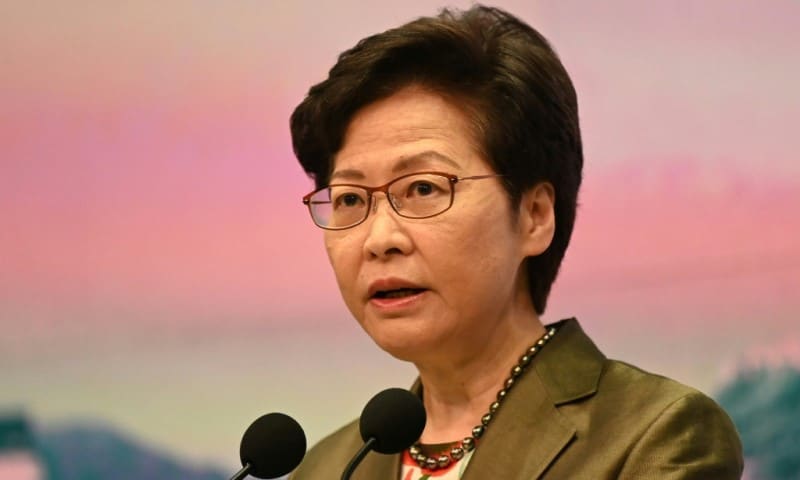 China’s anti-sanctions law will be implemented in some form in Hong Kong, the city’s leader confirmed Tuesday, a move that will add fresh regulatory pressure on international companies in the finance hub.

Beijing’s rubber-stamp legislature passed the law in June in response to Western penalties that were imposed following crackdowns in Hong Kong and Xinjiang.

Its powers include denying visas, deportation, or seizing assets of those who formulate or comply with sanctions against Chinese businesses or officials.

Foreign companies can be sued in Chinese courts for applying sanctions and the law can also be wielded against family members.

Rumors that China was planning to extend the law to Hong Kong have swirled for days ahead of next week’s meeting of the Chinese legislature after state media said some unidentified new measures were being planned for Hong Kong and Macau.

On Tuesday, Hong Kong’s chief executive Carrie Lam confirmed Beijing had consulted her on adding the law to the city’s mini-constitution, known as the Basic Law.

“The purpose of the Anti-Sanctions Law is to defend our country’s sovereignty, security and development interests,” she told reporters.

Lam said her advice had been for Hong Kong to pass its own legislation.

But she said Beijing could also impose the measures directly like it did with a sweeping national security law last year that snuffed out dissent.

“Some foreign forces, foreign governments and western media will definitely stir up this issue, hoping to weaken our status as a financial centre or the outside world’s confidence in Hong Kong,” she said.

“Local legislation can allow us to better clarify the law’s framework and procedures and fit it better to Hong Kong’s legal system.”

Relations between China and major Western powers have deteriorated in recent years, squeezing companies that operate in both markets.

The United States has imposed a series of sanctions on Chinese and Hong Kong officials, including Lam. China has responded with its own reciprocal measures.

International companies face being punished by each side if they adhere to either sanctions regime.

A bank that refuses to implement US sanctions, for example, could find itself cut off from access to the dollar. But those that adhere could find themselves in hot water with Beijing.

Expanding China’s anti-sanctions law to Hong Kong would increase the suite of tools at the disposal of both prosecutors and Chinese companies to pursue international companies deemed to be complying with foreign sanctions.