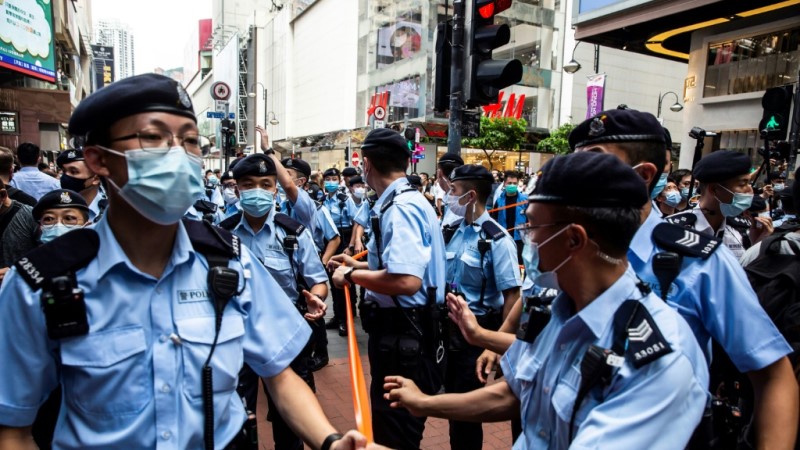 A 50-year-old man who died after stabbing a Hong Kong police officer was a “lone wolf” attacker who had been politically “radicalised”, the city’s security chief said Friday.

Footage of Thursday evening’s attack was caught by a local journalist’s livestream.

It showed a man in a dark t-shirt stabbing an officer in the back in the shopping district of Causeway Bay.

Police said the man — who has not been publicly identified by authorities — then stabbed himself in the chest and later died of his wounds.

A post shared by BTS - Behind The Story (@behindthestory.bts)

“Initial investigations indicate that this is a lone wolf-style act of domestic terrorism,” Chris Tang, a former police chief who was promoted to Hong Kong’s security secretary last week, told reporters outside the hospital where the officer was taken.

Tang said officers later searched the attacker’s home and found materials on his computer that showed he had been “radicalized”, although he did not elaborate any further.

“It’s not just the assailant who has to be held responsible for this incident, but also the many people who customarily advocate violence, incite hatred against the country, and beautify these attacks –- these acts of violence,” Tang added.

Hong Kong leader Carrie lam denounced the stabbing of a police officer in a busy shopping area as the city marked a tense anniversary of its return to China’s rule https://t.co/7ctGa0nwt0 pic.twitter.com/b61hfXEdOw

Huge and often violent pro-democracy protests convulsed the city for months in 2019.

China has responded with a widespread crackdown on dissent, imposing a sweeping national security law on the finance hub and prosecuting prominent democracy activists.

Police have led that crackdown.

Thursday’s attack occurred at the end of a day in which thousands of officers were deployed across Hong Kong to stamp down on any protests as the city marked the anniversary of its handover from Britain to China — and as Beijing’s leadership celebrated the centenary of the Chinese Communist Party.

Police shut down the city’s Victoria Park and maintained a heavy presence in nearby Causeway Bay, conducting multiple stop and searches with at least 19 arrests made.

Hong Kong’s leader Carrie Lam returned from the centenary celebration in Beijing on Thursday evening and said she “strongly condemned” the attack on the police officer.

“Police will fully investigate the case and see if there is any organization behind it,” she told reporters.

China says its crackdown and national security law are needed to restore stability.

Critics, including many western nations, say Beijing has shredded its promise to let Hong Kong maintain certain freedoms and autonomy after its 1997 handover under a “One country, two systems” model.