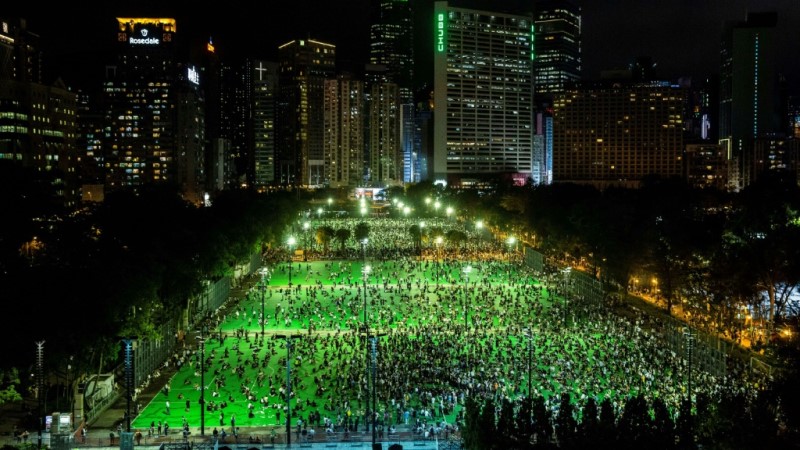 The Hong Kong Alliance, which has organised the annual vigil for more than three decades, said police cited the ongoing coronavirus pandemic in their refusal.

“We will continue to fight for the right to mourn June 4 lawfully,” the alliance said, adding it planned to appeal.

Security minister John Lee confirmed the ban, saying “anyone who participates in it (the vigil) will violate the law”, and warned a sweeping new national security law that Beijing imposed on Hong Kong last year could be used against those who defy the ban.

“The national security law clearly states that if anyone organises, plans or carries out any illegal means to damage or overthrow the fundamental system under the Chinese constitution, it would constitute subverting state power,” he told reporters.

Crowds have grown in recent years as many residents chafe under Beijing’s increasingly authoritarian rule.

Last year’s event was banned for the first time, with police citing the coronavirus pandemic and security fears following huge and often violent democracy protests that had convulsed Hong Kong the year before.

Tens of thousands defied that ban and massed peacefully at the vigil’s traditional site in Victoria Park.

Since then prosecutors have brought “unlawful assembly” charges against more than two dozen prominent democracy activists who showed up at the vigil, some of whom have already been jailed.

They include Joshua Wong, Lester Shum, Tiffany Yuen and Janelle Leung — all young activists who were handed jail terms last month for attending the vigil.

Hong Kong currently bans more than four people gathering in public under anti-coronavirus measures, making it all but impossible to get permission for protests.

The city has kept infections low but seen multiple waves of the disease flare up.

In the last month, the finance hub has only registered three local infections with unknown sources.

It is unclear whether Hong Kongers will risk hitting the streets for next Friday’s anniversary.

Beijing imposed the national security law on Hong Kong just a few weeks after last year’s rally and it has transformed the city’s once freewheeling political landscape.

More than 100 pro-democracy figures have been arrested under the new law, mostly for political views and speech.

Most are denied bail and face up to life in prison if convicted.

It is the first time authorities have made clear a political reason for banning remembrance of an event that has largely been purged from collective memory on the mainland.

Legal analysts say popular chants heard at previous Tiananmen rallies such as “End one party rule” and “Bring democracy to China” could be deemed illegal under the security law.

Chinese tanks and troops were sent to quell weeks of student-led democracy protests on June 4, 1989.

Estimates of numbers killed range from hundreds to the low thousands.