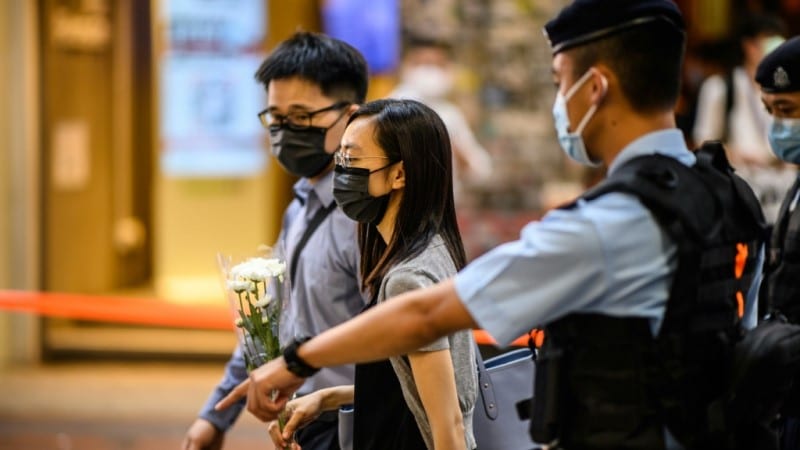 Hong Kong authorities on Sunday warned residents against mourning a man who killed himself after stabbing a policeman, saying that encouraging such memorials was the same as “supporting terrorism”.

Police had described the attacker, who stabbed an officer before fatally wounding himself on Thursday, as politically “radicalized”.

Some tried to pay tribute to the attacker by laying flowers and observing a moment of silence on Friday, prompting the latest warning from police.

HONG KONG. High alert in shopping district Causeway Bay on Friday. Anyone holding white flowers are especially stopped and searched. Last night, a police officer was attacked with a knife by a 50 yr old man then stabbed himself and died | @jeffersonjourno pic.twitter.com/FVkqyE29N0

“Advocating members of the public to mourn for the attacker is no different from supporting terrorism,” the force said in a statement.

Hong Kong and Chinese authorities have clamped down on dissent using a new national security law, under which a terrorism conviction could carry a life sentence, while promoting, inciting and supporting terrorism could result in up to ten years in prison.

In their Sunday statement, the police said they were investigating if the man who stabbed an officer was “incited” to carry out the attack.

It warned that “any act with a seditious intention” can be prosecuted, carrying a maximum sentence of two years in jail.

Images published by local media from the scene showed some white flowers left by mourners were dumped in trash bins or seized and placed into police vehicles.

A police officer was stabbed in #HongKong on the 24th anniversary of the city’s handover. The attacker then used the knife on himself and later died pic.twitter.com/f7DWmromHn

China says its crackdown and national security law are needed to restore stability in Hong Kong. But critics, including many western nations, say Beijing has shredded its promise to let the city maintain certain freedoms and autonomy after its 1997 handover.

The political situation has left many companies walking a tightrope as they try not to offend the authorities.

Vitasoy, a Hong Kong beverage conglomerate, had confirmed that the man who attacked the officer last week was its employee, and expressed regret at the tragedy.

But it had to swiftly apologise and condemn the attack after nationalist backlash on social media in mainland China.