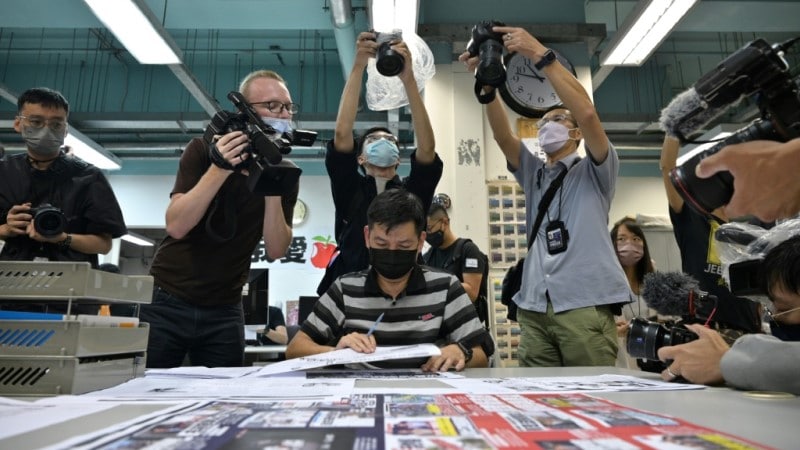 As journalists from Hong Kong’s embattled pro-democracy Apple Daily newspaper scrambled to produce their final edition, they didn’t need to go far to find their front page — the news was right outside their doors.

With its confrontational style, caustic commentaries and sometimes tawdry reporting techniques, the city’s most popular tabloid was no stranger to being in the headlines.

So it was perhaps fitting that its final front page after 26 years of operation featured its own journalists waving goodbye to hundreds of supporters on the streets outside. 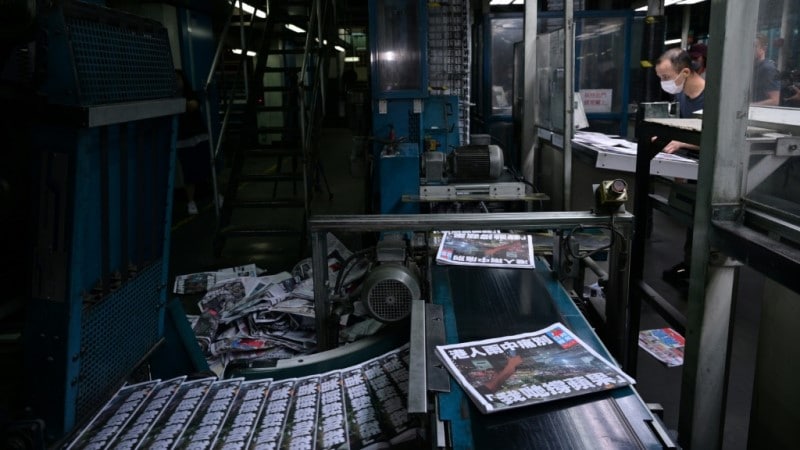 Apple Daily employees work in the printing room for the paper’s last edition in Hong Kong early on June 24, 2021

Apple Daily is the latest Hong Kong institution to be upended by a national security law that Beijing imposed on the city last year to stamp out dissent after huge and often violent democracy protests.

Inside the bustling newsroom on Wednesday evening many staff wept as they put together the last edition. Others gathered for group photos and cheered.

“We’re trying to do the best at the very last moment,” a harried page designer, who gave his surname Kwok, told AFP, as a gaggle of reporters from rival outlets criss-crossed the newsroom documenting a watershed moment for their own embattled industry.

“It’s a complicated feeling,” he added.

One photographer, who declined to be named, said the newsroom was filled with far more employees than usual on its last night, almost like a reunion or a funeral.

“It was a chance to gather all the colleagues together, we made it a historical moment,” he told AFP. 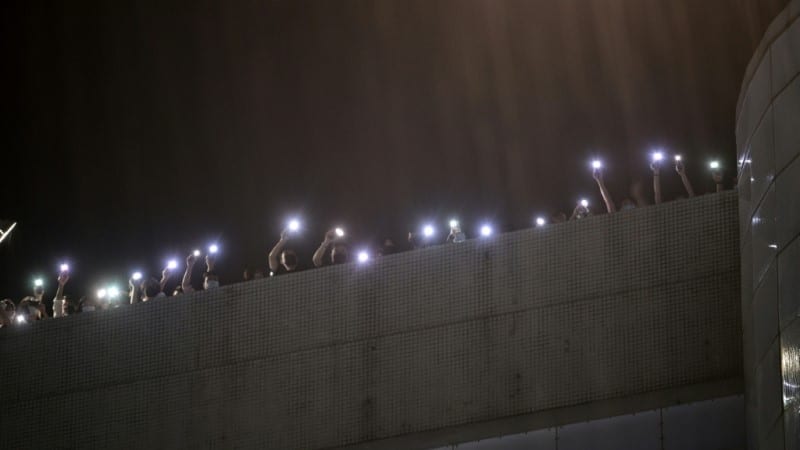 Employees of the Apple Daily newspaper shine phone torches from their office rooftop during heavy rain and shout thanks to supporters down on the street below in Hong Kong on June 23, 2021

But he said few had much optimism.

“It doesn’t look good for the future of Hong Kong news, press freedom and the news industry,” he added.

Throughout the evening a steadily growing crowd of supporters kept vigil outside.

Many chanted slogans or messages of encouragement and shone mobile phone lights towards the building.

Now and then, those inside would come out onto a balcony and wave, replying with their own mobile phone flash lights.

Transportation worker Alan Tso, 30, said he had been reading Apple Daily for the last 12 years.

He said he sent a box of fresh apples to the company this morning and asked for early leave from work after learning the paper would close.

He pinned a three page hand-written letter to the company’s gates.

“Thank you for standing fast at your posts and reporting news every day for Hong Kongers,” it read.

“Apple Daily stands for the spirit of daring to do what you believe is right,” Tso told AFP. “I won’t buy other newspapers after I lose it.”

Hong Kong has no Future

The paper’s headquarters is on a remote industrial estate at the far eastern end of Hong Kong.

A 27-year-old woman who gave her first name as Beatrice said she travelled with a friend to be with her favorite paper for its last night.

“I felt like I needed to go. It’s a duty for me to say goodbye,” she said.

A man in a yellow face mask, who gave his surname as Chow, was among four people writing messages on the paper’s main gate.

“I think Hong Kong has no future,” he told AFP.

“We will never have the old Hong Kong again because since the national security law came in all freedom of press, freedom of expression and freedom of assembly has been suppressed by the government.”

Shortly after midnight, the printing presses began rolling and staff came out to give free copies to the crowds outside.

Many in the crowd were weeping. Others chanted democracy slogans and shook the hands of some of the 1,000 employees now out of work.

One Apple Daily photographer, who asked not to be named but said he joined when the paper first opened in 1995, had spent some of the evening watching and shooting the crowds below.

His eyes were red.

Asked what he would do next, he simply shrugged.