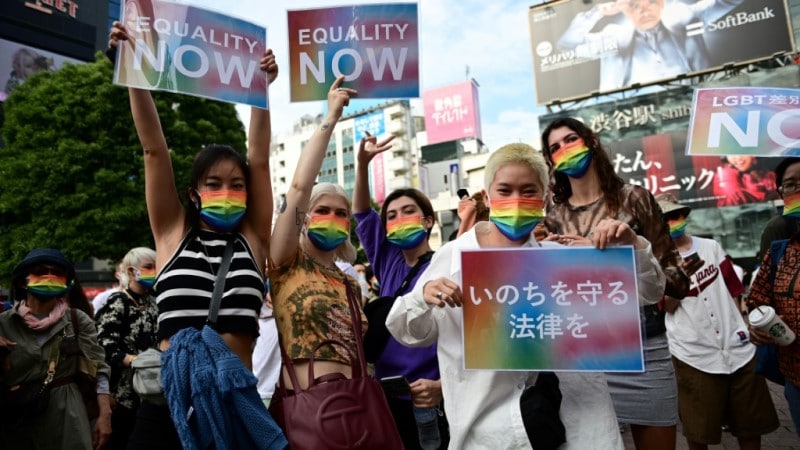 Japan is at a “turning point” for LGBTQ rights, campaigners said Wednesday, vowing to use the Tokyo Olympics as a catalyst for change as they called on lawmakers to approve an anti-discrimination bill.

The country has seen a renewed push for legislation protecting the rights of sexual minorities, with opinion polls showing growing support for LGBTQ-friendly laws, especially among younger people.

But approval of the proposed anti-discrimination bill has been waylaid as members of the conservative ruling party discuss the details.

During one debate in May, a Liberal Democratic Party (LDP) lawmaker sparked outrage by reportedly saying same-sex relationships threaten “the preservation of the species“.

Yuri Igarashi, director of the LGBTQ rights group J-ALL, told reporters there was still time for the proposed law to be passed before the parliament session ends next week.

“We would like them to fulfill their promise to the people of this country,” she said, citing a 2019 election pledge by the LDP to “promote understanding” of LGBTQ issues.

At the UN, Japan has supported an anti-discrimination resolution, Igarashi added, while Prime Minister Yoshihide Suga recently spoke out against prejudice and discrimination.

“We believe this is a true turning point, and I’d like to really stress the importance of establishing a new law in the current Diet,” or parliament session, she said.

The issue is in the international spotlight as this summer’s virus-postponed Games approach, said Gon Matsunaka, head of Pride House Tokyo, a community hub recognised as part of the Olympic programme.

“The Tokyo 2020 Olympics is galvanising huge international attention to how this country is going to address LGBTQ issues,” he told reporters at the Foreign Correspondents’ Club of Japan.

“By utilising this huge momentum, we aim to do two things: first, to create change inside Japan’s sport industry, and second, creating change in society itself.”

While Japan has some protections for sexual minorities, it remains the only G7 country that does not recognise same-sex unions, and many couples say they can struggle to rent apartments together and are even barred from hospital visits.

It is “very difficult” for LGBTQ sports figures in Japan to be honest about their sexuality, said Fumino Sugiyama, a former athlete who was on the national women’s fencing team before coming out as a transgender man.

Athletes are afraid they will disappoint their fans and families, or that they will face discrimination from their sports association that could hinder their career, Sugiyama explained.

The Olympic Charter states that “every individual must have the possibility of practising sport, without discrimination of any kind”.

Japan’s proposed anti-discrimination law has been under discussion for years, and gained traction after a group of lawyers began working on it in 2015.