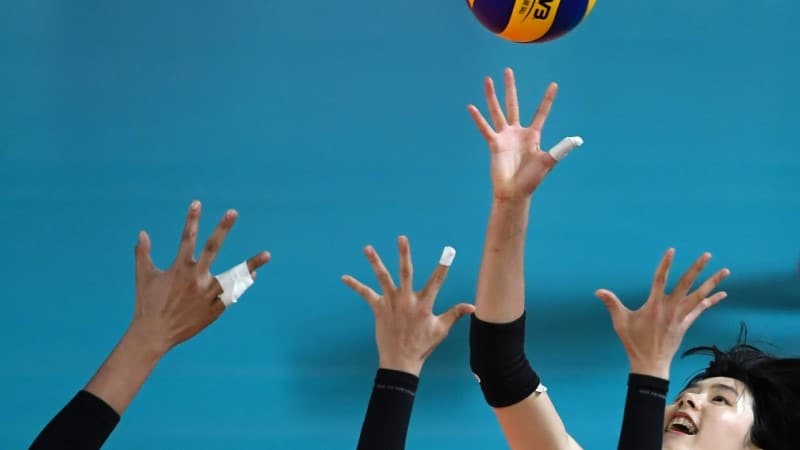 Lee Jae-yeong, pictured, and her twin sister Lee Da-yeong have been reportedly suspended from their club and the South Korean national volleyball team over bullying allegations

Two twin South Korean women volleyball stars have been suspended from the national team over allegations of school bullying, reports said Monday, in the latest sporting abuse scandal to hit the country.

Volleyball is one of South Korea’s most popular spectator sports after the big three of baseball, golf and football.

Lee Jae-yeong and Lee Da-yeong, 24, both play for the Heungkuk Life Insurance Pink Spiders, the biggest women’s team in the country, and were instrumental in securing South Korea’s place at the Tokyo Olympics.

They were accused of bullying last week by an online poster claiming to be a former middle school teammate, who listed 21 allegations including physical violence, stealing money, and threatening with a knife.

Their club suspended them indefinitely on Monday.

“We are very sorry and feel deeply responsible for disappointing everyone who loves volleyball,” the Pink Spiders said in a statement.

“School violence is something that should never happen, and it cannot be tolerated for any reason.”

Hours later, the players were banned from the national team for an unspecified period, Yonhap news agency reported.

As well as their sporting prowess, the Lees have bolstered their celebrity status by appearing on various television programs.

But the accusations over their past prompted widespread outrage in a country where bullying at school or in the workplace is a serious social problem.

South Korea is a regional sporting power and regularly in the top 10 medal table places at the summer and winter Olympics.

But in an already intensely competitive society, winning is virtually everything in its sports community — and physical and verbal abuse are rife.

A triathlete took her own life last year after suffering years of abuse from her coach and senior athletes, and a speed skater sued her teammate over a bullying controversy during the 2018 Pyeongchang Olympics.