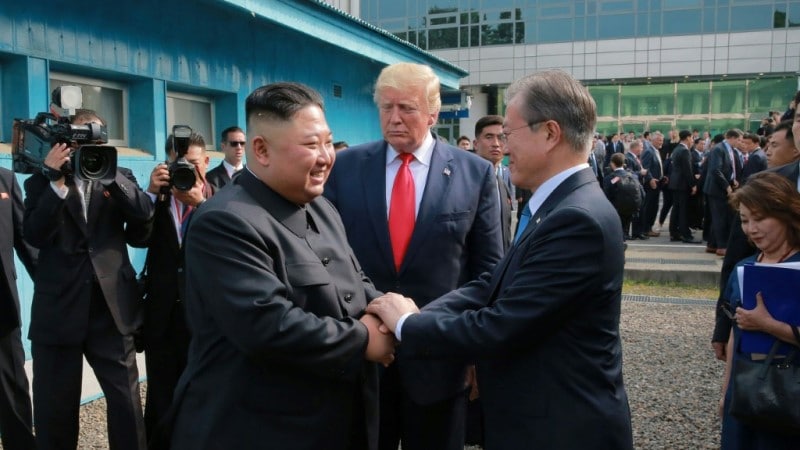 North and South Korea signalled a surprise thaw in relations on Tuesday, announcing the restoration of cross-border communications that were severed more than a year ago and an agreement between their two leaders to improve ties.

The joint announcement, which coincided with the anniversary of the end of the Korean War, was the first positive development since a series of summits between the North’s Kim Jong Un and the South’s President Moon Jae-in in 2018 failed to achieve any significant breakthrough.

The two sides revealed that Kim and Moon had exchanged a series of letters since April in which they agreed that re-establishing hotlines would be a productive first step in rebooting relations between the two rivals who, despite the end of their 1950-53 conflict, remain technically at war.

“The top leaders of the north and the south agreed to make a big stride in recovering the mutual trust and promoting reconciliation by restoring the cut-off inter-Korean communication liaison lines,” North Korea’s official KCNA news agency reported. 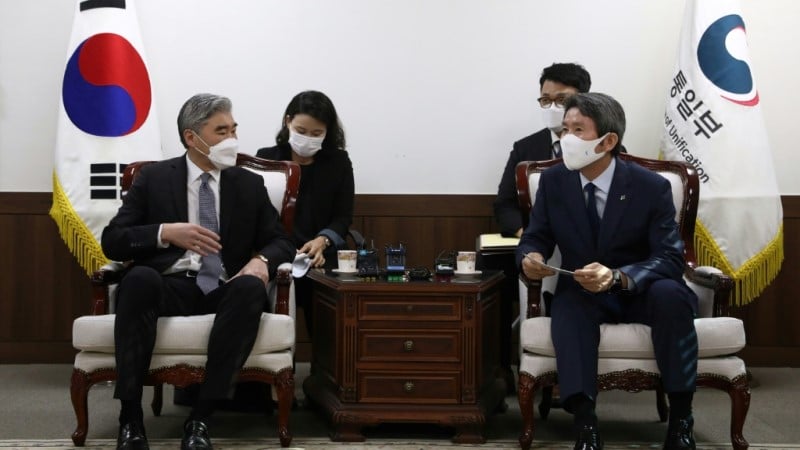 Pyongyang unilaterally cut off all official military and political communication links in June last year over activists sending anti-Pyongyang leaflets across the border, but the two sides said all lines were restored on Tuesday.

They exchanged their first phone call since the suspension on Tuesday morning, Seoul’s unification ministry said, with the defence ministry adding that military hotlines were also back to normal operation.

Moon’s office said that restoring the hotlines was the first step towards improving ties.

“The two leaders also agreed to restore mutual trust between the two Koreas as soon as possible and move forward with the relationship again,” it added in a statement.

The dovish Moon is credited with brokering the first-ever summit between North Korea and a sitting US president in Singapore in June 2018.

But Pyongyang largely cut off contact with Seoul following the collapse of a second summit between Kim and then US president Donald Trump in Hanoi that left nuclear talks at a standstill.

Just days after severing the hotlines last year, Pyongyang also blew up an inter-Korean liaison office on its side of the border and threatened to bolster its military presence along the Demilitarized Zone that separates them.

The United States welcomed the agreement.

“We certainly believe that this is a positive step,” State Department spokeswoman Jalina Porter told reporters.

“Diplomacy and dialogue are central to achieving complete denuclearisation and establishing permanent peace on the Korean peninsula,” she said.

Since US President Joe Biden took office, Pyongyang and Washington have adopted a wait-and-see attitude to relations following the diplomatic roller-coaster ride under Trump that produced three summits but no agreement on dismantling the North’s nuclear arsenal.

Kim said in June that Pyongyang needed to prepare for both “dialogue and confrontation” with Washington — but with a particular emphasis on the latter.

The White House promised a “practical, calibrated approach” — including diplomatic efforts — in a recent review of its strategy to persuade the impoverished North to give up its nuclear weapons and missile programs.

Sung Kim, the top US diplomat in charge of North Korea negotiations, said in June that Washington was ready to meet with Pyongyang “anywhere, anytime, without preconditions”.

But Kim Yo Jong — Kim Jong Un‘s sister and one of his key advisers — dismissed the offer.

“It looks like he has decided that restoring inter-Korean relations is beneficial to the North’s both domestic and foreign policies and politics,” Yang Moo-jin, a professor at the University of North Korean Studies, told AFP.

Despite the standstill in talks, Moon has relentlessly stressed the importance of restoring inter-Korean ties, he added.

“This should be read as Kim Jong Un’s first response to Seoul and Washington,” Yang said.