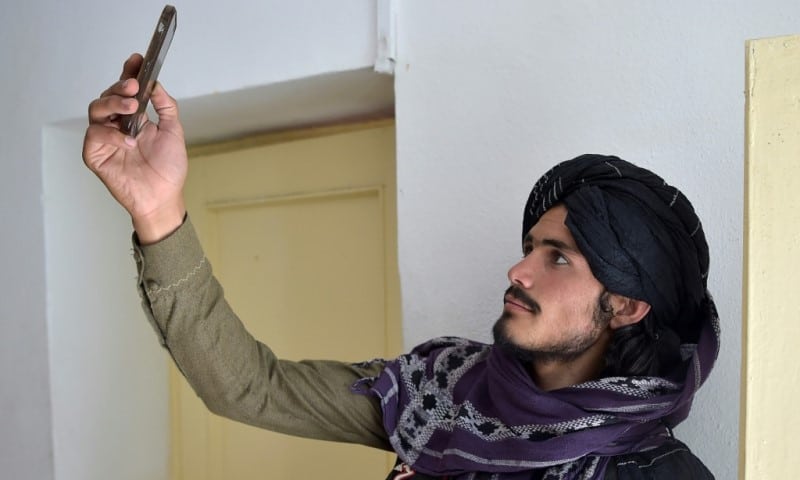 ​The Taliban have become adept at posting over the years, and were especially active on Twitter and Facebook during the Spring offensive that culminated in their victory.

The last time the Taliban were in power, social networks were a thing of the future — but this time around, the militants’ takeover of Afghanistan poses tricky questions for the likes of Facebook and Twitter.

As their arrival in Kabul sparked worldwide panic, Taliban officials took to Twitter to project a message of calm beyond Afghanistan’s borders.

The fact that Taliban officials are tweeting is cause for outrage among some opponents — not least supporters of Donald Trump, who was banned from the site in January over the alleged risk of inciting violence.

All those claims that the Islamic Emirate of Afghanistan forces people to marry their young girls to Mujahideen are totally wrong. It is a poisonous propaganda.

“I look forward to a prompt reply on why a former United States President is banned while two Taliban spokesmen are allowed to remain,” US Representative Doug Lamborn complained in a letter to Twitter CEO Jack Dorsey.

Lamborn and other critics say Twitter is providing the Taliban with a global megaphone, allowing militants with a brutal track record to present themselves as legitimate.

On the other hand, Afghans are anxious to know more about what to expect from their new rulers. Some argue that pulling the plug on any means of communication is against the public interest.

On WhatsApp, the account of Taliban spokesman Zabihullah Mujahid appears to have been blocked, while the Financial Times reported that a Taliban WhatsApp helpline allowing citizens to report looting had been shut down.

That earned criticism from some activists, who said it had been useful.

A WhatsApp spokesman declined to confirm the shutdowns, but told AFP: “We’re obligated to adhere to US sanctions laws. This includes banning accounts that appear to represent themselves as official accounts of the Taliban.”

WhatsApp’s owner Facebook meanwhile confirmed that it has for years viewed the Taliban as terrorists, and is therefore blocking Taliban accounts on these networks as well as Instagram, which it also owns.

The policy prompted a barbed response from Mujahid when asked if the Taliban would protect freedom of speech.

“The Facebook company, this question should be asked to them,” he said.

Twitter did not respond to a request for comment. But Shaheen and three other Taliban spokesmen — who together boast nearly a million followers — continue to post, suggesting the site has so far declined to ban them under its “violent organizations” policy.

But the Taliban’s status is slightly ambiguous: they appear on the US Treasury’s list of Specially Designated Global Terrorists, but are not classified as a Foreign Terrorist Organization by the State Department.

He noted they had faced similar quandaries after Myanmar’s coup in February over whether or not to deplatform the military junta.

“With Afghanistan, it depends a lot on the power-sharing discussions,” Chima said. “If the Taliban are officially recognized as part of that, we will probably see more pressure on the companies not to take as hardline a position as they did in Myanmar.”

The question of whether the Taliban will be allowed to communicate via the official accounts of Afghan government ministries — some of which have tens of thousands of followers and “blue tick” verification — remains unanswered.

For now, labeling content from Taliban-run accounts with disclaimers remains “a measure in the toolkit”, Chima suggested.

What’s clear is that the Taliban have recognized the power of social media, a weapon unavailable during their 1996-2001 stint in power, said Delhi-based counter-terrorism analyst Kabir Taneja.

“They have learnt a lot about the power of communication from others such as ISIS,” Taneja said.

The Taliban have become adept at posting over the years, and were especially active on Twitter and Facebook during the Spring offensive that culminated in their victory.

But, Taneja warned, they could also seek to restrict Afghans’ access to the internet, pointing to footage of anti-Taliban protesters in the city of Jalalabad that went viral this week.

“These kinds of events may push the Taliban to severely control internet penetration in the time to come,” Taneja said.