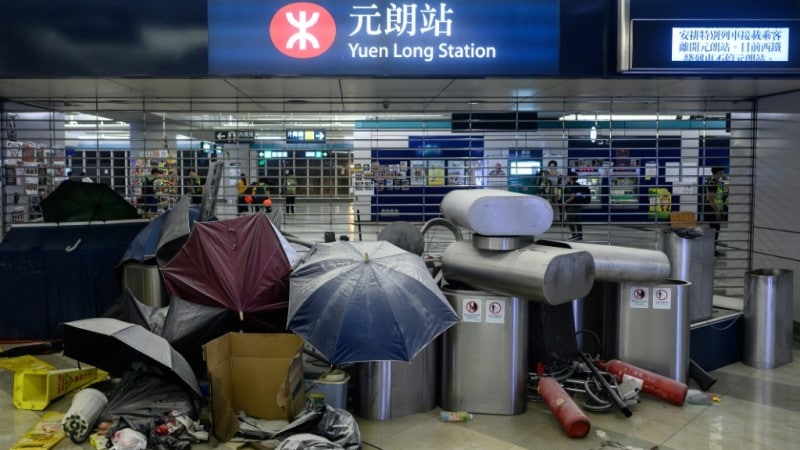 A Hong Kong journalist was arrested Tuesday in a probe linked to a recent documentary she co-produced investigating an attack on democracy supporters by government loyalists, a move her employers described as “chilling”.

Police confirmed the operation on Tuesday evening saying Choy was arrested on suspicion of making an improper application to access car owner details.

RTHK drew a direct link between Choy’s arrest and an investigation she co-produced into the “Yuen Long attack” — an assault in July last year by dozens of men armed with sticks on people returning from a protest.

“Like everyone else, I am also concerned that this will have a chilling effect,” RTHK head Leung Ka-wing told reporters.

Choy was released on bail late Tuesday and said her arrest would affect “how every other journalist in town is going to report news in the future”.

“I urge all journalists to stand fast on our values and carry on our work with no fear and no favor,” she told reporters.

The brazen assault in Yuen Long — a town close to the rural border with mainland China — and the police’s failure to respond quickly enough was a turning point in last year’s huge and often violent pro-democracy protests, further hammering public trust in the force.

In a documentary titled “Who Owns The Truth?”, which ran as the one year anniversary of the attack approached, RTHK used footage filmed by witnesses and security cameras — as well as public number plate searches and interviews — to piece together what happened that night.

It uncovered new details about the alleged attackers, some of whom have links to politically influential rural committees that support Beijing.

It also said police failed to respond to the build up of stick-wielding men ferried into the district by specific vehicles that evening hours before the attack.

While police have admitted not responding quickly enough — arguing officers were busy dealing with large scale protests elsewhere — they have vehemently denied any suggestion of collusion.

Police say they have arrested a number of the attackers, some of whom have links to “triad” organized crime gangs. Some attackers fled to the Chinese mainland.

More recently police have arrested some of those attacked by the mob on rioting charges.

“Seeking the truth is the job of the media,” the association said. “The search for license plates is a common investigation method used by reporters.”

Hong Kong maintains a publicly accessible license plate database. It is often used by journalists for investigations, including those working for pro-Beijing news outlets.

Its coverage of last year’s huge protests sparked calls from leading pro-Beijing figures to assert more control over its output.

The government has since launched a review of RTHK, a move critics fear will hobble its independence.

Unlike the Chinese mainland, where news is strictly controlled, semi-autonomous Hong Kong has a vibrant media landscape and hosts regional headquarters for many international news outlets.

But its reputation as a free press bastion is fading. Since 2002 Hong Kong has fallen from 18th place in Reporters Without Borders’ global press freedom ranking to 80th this year.