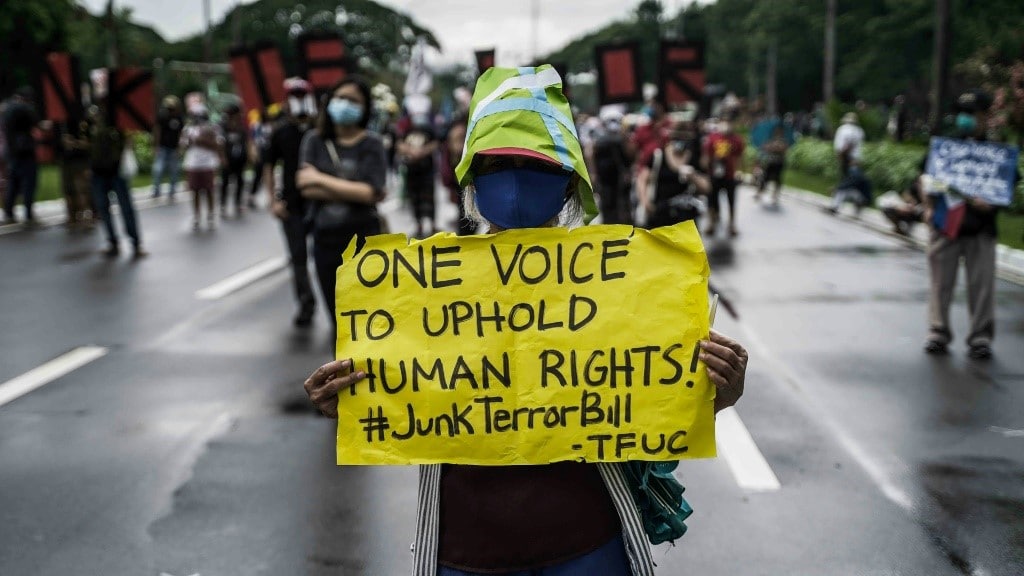 Dubbed as a human rights disaster in the making, Philippines’ new Anti-Terrorism Bill would permit authorities to arrest alleged terrorists without a warrant. Here’s why this bill is dangerous and what you can do to stop it.

A counterterrorism law is meant to make people feel safe. But in the Philippines, it’s becoming a concern of millions of Filipinos, especially those who openly criticize the administration. It is now up to President Rodrigo Duterte to sign the bill, just mere days after he labeled it as urgent.

Several organizations also reported that Deputy Minority Leader Carlos Zarate of Bayan Muna Party-List was muted during the virtual deliberations right after he voted no.

What is the Anti-Terrorism Bill?

This bill passed by the Senate aims to prevent and stop terrorism in the country by targeting individuals that are profiled to be most likely to join and help terrorist groups commit terrorist acts.

That Seems Great, So What’s Wrong with It?

If the Anti-Terrorism Bill is passed, the government and its forces would be granted the power in defining the meaning of terrorism, who terrorists are, and what they can do with them. This will be done assuming that the entire state is rational since any suspicions by the police and other state institutions are enough basis to warrant arrest and punishment.

The said bill will allow the military, law enforcement, and police to do warrantless arrests without any liability. This negates Article 125 of the Philippine Revised Penal Code. What’s more? Anyone can be a target.

This bill’s vague definition of terrorism includes people who cause damage or attempt to cause damage to government facilities and properties, people who commit an assault or attempted assault, those who carry or buy a knife which can be used to kill, donating to relief organizations and drives which are not recognized by the state, and participating in a rally or movements that cause risk to public safety.

The bill also dubs those who meet up with friends as a terrorist due to the possibility that they may be secretly plotting a government attack, as well as writing, posting, sharing, and retweeting posts that are related to terrorist activities. Considering this caveat, dissent on social media can be used as grounds by the authorities to charge people with inciting to sedition.

The Anti-Terror Bill Might Replace The Human Security Act

When the Human Security Act became legal in 2007 under former President Gloria Arroyo, it became widely contested and dubbed as unconstitutional due to technicalities. However, it pales in comparison to the new bill.

The Anti-terror bill dictates that no one is exempted from state surveillance. This includes the monitoring of social activities, e-mails, texts, and calls. Those accused will be jailed for 24 days even without a case against them. People who violated the law would be jailed for 12 years to life.

What You Can Do

Since the bill has not been transmitted to the Malacañang Palace, people have a big window of opportunity to get more members of Congress to withdraw their votes, therefore overturning the majority. When the bill is overturned, the congress may be pressured into having a special session. As of writing, the hashtag #JunkTerrorBill has reached close to a million tweets. Citizens are also sending e-mails to senators and representative to junk the bill.

Fortunately, several lawmakers have withdrawn their authorship, insisting that it was not a face-saving move. Philippine Vice President Leni Robredo has denounced Congress’ move to approve the bill, saying that it had an ill timing, considering the current economic and health crisis. The only two dissenters from the senate, Senators Francis Pangilinan and Risa Hontiveros also questioned their colleagues’ priorities.

The Case of Montasser Sudang

To people who do not fear the Anti-Terrorism Act, the disturbing case of Montasser Sudang is something they should know. Nineteen-year-old Sudang is a farmer who lived in North Cotabato, a predominantly Muslim area in Mindanao. On March 4, 2003, Sudang went to Davao City to welcome a loved one from the airport. As it was his first time visiting the city, he was ecstatic. However, the did not know that the trip would change his life.

That morning, a bomb exploded in the airport which claimed the lives of 22 civilians and wounded a hundred more. Due to his home and religion, Montasser became the primary suspect. Days later the bombing, elder men from the family were also put to jail and charged with terrorism, despite not having any proof. These were all done despite a statement and evidence from the Abu Sayyaf that they were responsible for the attack.

He is not the only person arrested in the country for a crime he did not commit. Many Moro civilians have also been tried, jailed, and even killed by state authorities because they were accused of being terrorists.

This very thing will be strengthened due to the Anti-Terrorism Bill. Moros and activists can easily become the fall guys, as they are vulnerable and prone to injustice.

Currently, there are reports of students and activists in the Philippines who are receiving threats and are being harassed on Facebook by their duplicate accounts. The threats from the accounts accuse people of being activists and posts photos and videos that are connected to terrorism.

The government’s war against drugs has killed thousands of Filipinos. State-sponsored attacks and killings have caused a public outcry. One can only imagine the atrocities that will be done by authorities knowing they enjoy the law’s full protection.