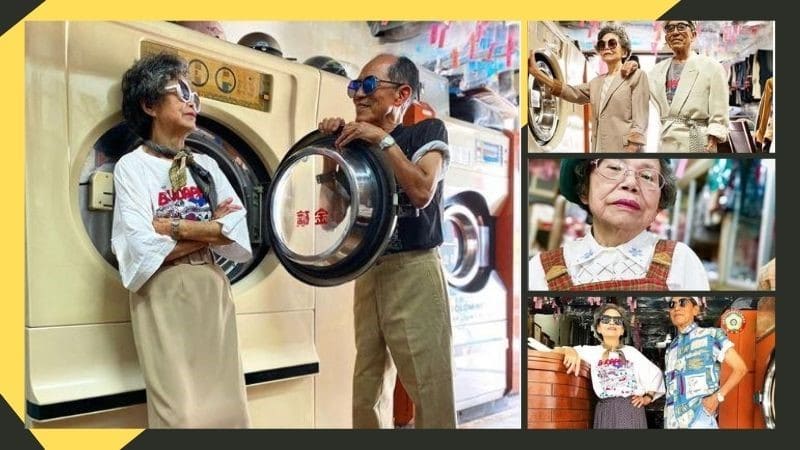 Chang Wan-ji, 83, and his wife Hsu Sho-er, 84, have racked up nearly 600,000 followers on Instagram over the last month as their attitude-filled fashion portraits went viral

Chang Wan-ji, 83, and his wife Hsu Sho-er, 84, have racked up nearly 600,000 followers on Instagram over the last month as their attitude-filled fashion portraits went viral.

They have even been featured in the Taiwanese edition of Vogue and Marie Claire.

The couple have run a laundry for decades in a small town near the central city of Taichung. 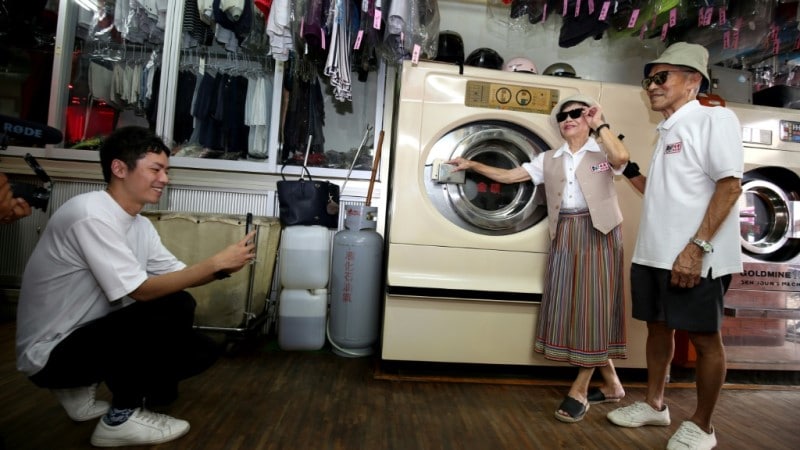 The pair are naturals in front of the camera

Over the years, customers have either forgotten or failed to collect reams of clothing that the couple never felt able to throw away.

Grandson Reef Chang, 31, hit upon the idea of using the clothes to alleviate the couple’s boredom.

“My grandpa and grandma were staring blankly at the streets because business wasn’t good,” he told AFP. “I wanted to find something new they could enjoy doing.”

The pair were naturals in front of the camera.

“Modelling these clothes makes me feel 30 years younger,” beamed Chang, when AFP paid a visit to the store earlier this week.

“Many people are telling me ‘You are famous now and you look younger’.”

Hsu felt so, too.

“I am old in age but my heart is not ageing,” she said. “I like to put on pretty clothes and go out to have some fun.” 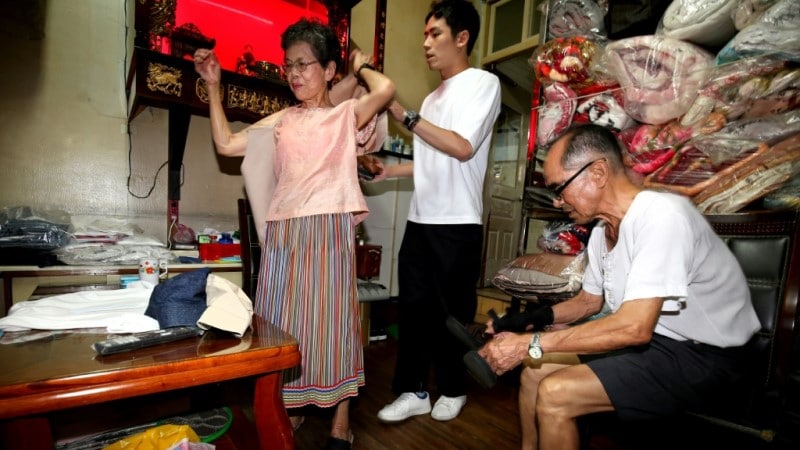 Grandson Reef Chang, 31, hit upon the idea of using the clothes to alleviate the couple’s boredom

It was while modelling other people’s garments, Hsu came to remember that she also had many forgotten outfits in her closet which she has since rediscovered.

“I even found some clothes I bought 30 years ago and I can still wear them. It’s a happy surprise,” she said.

Chang currently only uses the Line messaging app to make free phone calls but Reef says his grandfather is keen to learn how to make the perfect Instagram post.


今天放這張的原因，是孫子上週一個人手忙腳亂下發生的蠢事⋯⋯ 上週末突然間有很多留言，一直很想好好回覆，結果按錯鍵點到了刪除，但這張真的很可愛！是萬吉拍照時自己玩開了，拿著相機擺姿勢說「我是不是要這樣？」 看到他們自己樂在其中的神情就是最棒了的！但我以後會小心⋯不再做蠢事了。 👴🏼萬吉（身高160) 外套：至少8年未取真皮騎士外套 上衣：至少5年未取條紋襯衫 褲子：至少10年以上未取導致褶痕處自然色落的工裝褲 👵🏼秀娥(身高155） 外套：至少5年未取合成皮騎士外套 洋裝：15年以上未取老洋裝 🔔溫馨提醒｜洗衣服請記得拿❤️ The reason for posting this picture today is because of the stupid thing I’ve done in a rush. Last week, many comments came all in a sudden and I accidentally deleted this picture when I tried to reply you guys! This picture is really so cute! Wan-Ji got so turnt during the shooting and was posing and asking “should I do it in this way?”. It was the best moment to see them enjoying themselves. And, I’d be careful not to do such stupid thing again! 👴🏼Wan-Jin (160 cm) Outer: Leather jacket, unclaimed for >8 years Top: Striped shirt, unclaimed for >5 years Bottom: Cargo pants, faded at the flowing because it’s unclaimed for >10 years 👵🏼Sho-Er (155 cm) Outer: Artificial leather jacket, unclaimed for 5 years Dress: unclaimed for >15 years 🔔Please remember to pick up you clothes ❤️ #萬秀洗衣店 #萬秀的洗衣店 #wantshowasyoung #grandparents - - _ #mixandmatch #clothes #ootd #instafashion #style #fashion #couple #夫婦 #80代 #grandma #grandpa #femmefuture #classyvision #vintage #古着 #コーディネート #love #laundry #outfits

The account first started going viral abroad and around 400,000 new fans have started following in the past week alone after major international media picked up on their success.

Reef said he translates and reads out fan mail pouring in from all over the world.

“We’re very moved by the messages,” he told AFP, “Many people are saying that ‘Wantshowasyoung’ is the first happy news they’ve seen in this dark year marred by the Covid-19 pandemic and problems in many countries,” he added.

The couple’s worldwide fame has also prompted a few forgetful customers to pick up old clothes, while some local fans have started visiting their sleepy town to see the store.

The shop is named “Wan Sho” — a combination of the middle character of their Chinese names. 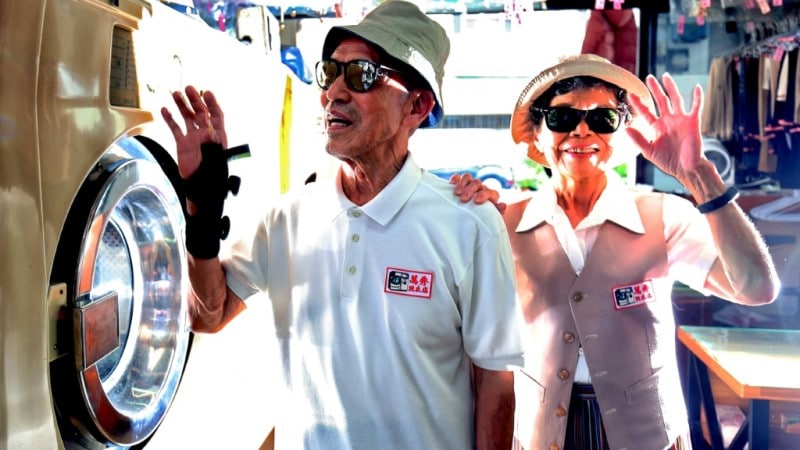 The couple tied the knot in an arranged marriage six decades ago, a practice then common in Taiwan

The couple tied the knot in an arranged marriage six decades ago, a practice then common in Taiwan.

Chang said he had thought about retiring but decided to stay on as long as he can as the laundry business has become less labor-intensive thanks to machines.

“Elderly people should keep moving and remain active or we will age faster… When I am working and being kept busy, I don’t have time to worry,” he said.

Chang says he has lost count of how many garments have gone uncollected in his shop over the decades but he thinks there are at least 400 items at the moment. 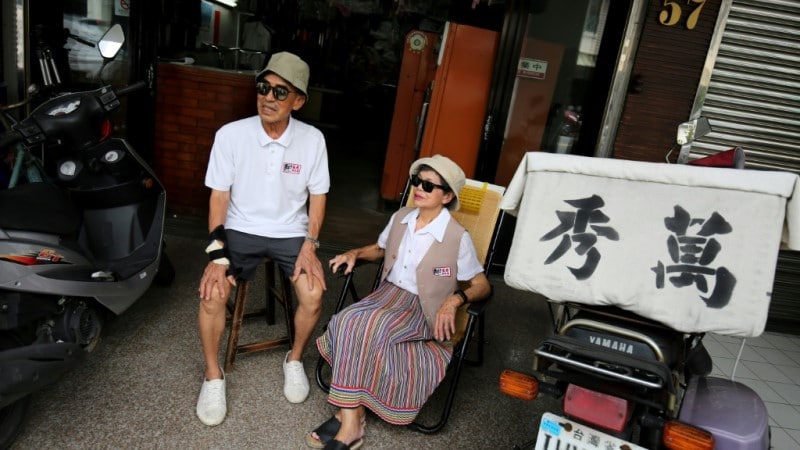 Many more have been donated to charities and impoverished families over the years.

The couple hope to use their new social media clout to promote the concept of “environmental fashion”.

“Instead of following ‘fast fashion’ and keep buying new clothes, we hope people can see that old and second-hand clothes can be fashionable if you arrange and combine them in new ways,” said Reef Chang.

“This would cause less damage to the earth and the environment.”