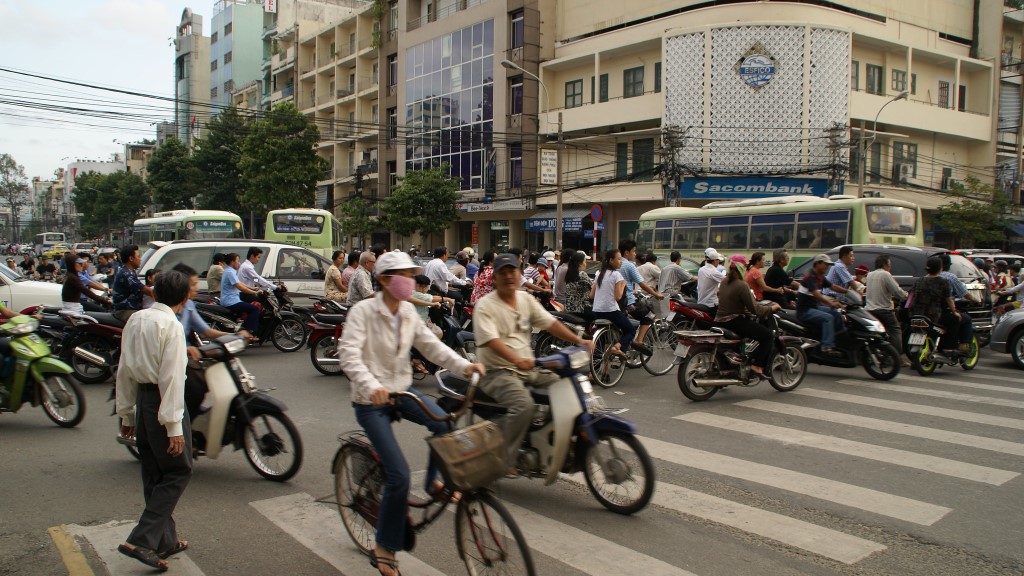 Who would have thought that a humble bicycle could still be further improved to make it a more efficient ecological transport which does not only protect the rider’s health but also help improve air quality in the streets?

Three friends from Thang Long Institute are among those who brave the heavily-polluted streets of Da Lat City, in the Province of Lam Dong in southern Vietnam, when going to and from school in their bicycles.

Tung Bao Khanh, Cao Thi Khanh Hoa and Tran Hoang Phi Bao, who are all 17, thought of a simple way to prevent themselves from breathing the toxic fumes coming out of motorcycles and cars.

As part of their science school project, the three students invented a device which can be easily installed on the handlebar of a bike. It’s a simple contraption that sucks in incoming air, filter it, and funnel its purified form into the rider, a report said.

The filtration system, which is basically the heart of the device, is made up of three layers of cotton and activated carbon fabric which captures dust and impurities from the air.

Powering the filtration device are six small fans that are installed on both sides of a specially-made bicycle fork. Aside from charging up the filter, the fans also help blow clean air to the rider’s face.

The entire setup only costs around USD$13.40 but the results taken from the tests are rather very promising. According to the data, the device is capable of filtering up to 86% of the dust in the surrounding air and 63% of nitrogen dioxide.

The trio, who won a major prize for their invention in a local science fair competition, is looking to further improve their creation so that it can be adapted into other transport vehicles.

“The version we have made is for bicycles, but it can be adapted very easily to a motorbike or an electric bike. It would be even smaller because you can take advantage of the motorbike’s battery. We hope to reach the largest number of vehicles and help clean the air,” Hoa said in an interview.

This clever invention couldn’t be more perfect as a potential solution to the nation’s ever-growing problems in pollution.

According to Green Innovation and Development Centre (GreenID), a local non-profit environmental organization, air pollution in Hanoi, for example, is already at the same level to that in Beijing, China.

“The average level of air pollution in Hanoi last year was four times higher than what is deemed acceptable by the World Health Organization’s (WHO) air quality guidelines. I would say that the city is on an air pollution red alert,” Nguy Thi Khanh, GreenID’s founder, said in an interview.

Aside from industrial emissions coming from heavily-industrialized centers in the country, the increasing number of motor vehicles which use fossil fuels to run, is considered to be one of the main causes of air pollution in Vietnam.

Professor Le Thanh Hai of Thang Long Institute believes there is great potential in the students’ invention which can be used to help solve the air pollution problem in the national level.

Attaching an air filtration system on bikes isn’t entirely a new idea. One has been made by Dutch artist and ecological activist Daan Roosegaarde which he calls the Smog Free Bicycle.

It is part of a much larger project which includes infrastructures like the Smog Free Tower and the Smog Free Ring. The program was co-developed by a major bike sharing firm in China, ofo.