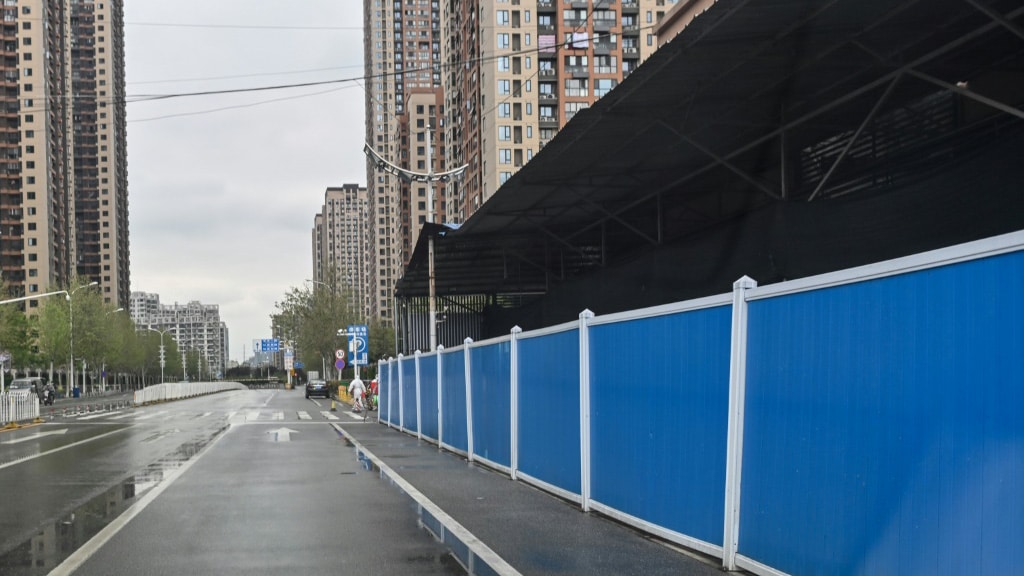 The market in Wuhan, China, where the new coronavirus was first detected has been sealed behind a tidy partition

In the Chinese city of Wuhan, the wet market that spawned the pandemic which has brought the world to its knees now slumbers quietly behind a tidy-looking blue-and-white partition.

But there are ample clues that something toxic once lurked inside the Huanan Seafood Market — police tape, chest-high red barriers, and staff in head-to-toe white hazmat suits lugging equipment.

Chinese disease control officials have previously identified wild animals sold in the market as the source of the coronavirus pandemic that has taken more than 33,000 lives worldwide so far and rocked the global economy.

A price list issued by one merchant at the sprawling emporium, which circulated on China’s internet in January, contained a smorgasbord of exotic wildlife including civets, rats, snakes, giant salamanders and even live wolf pups. 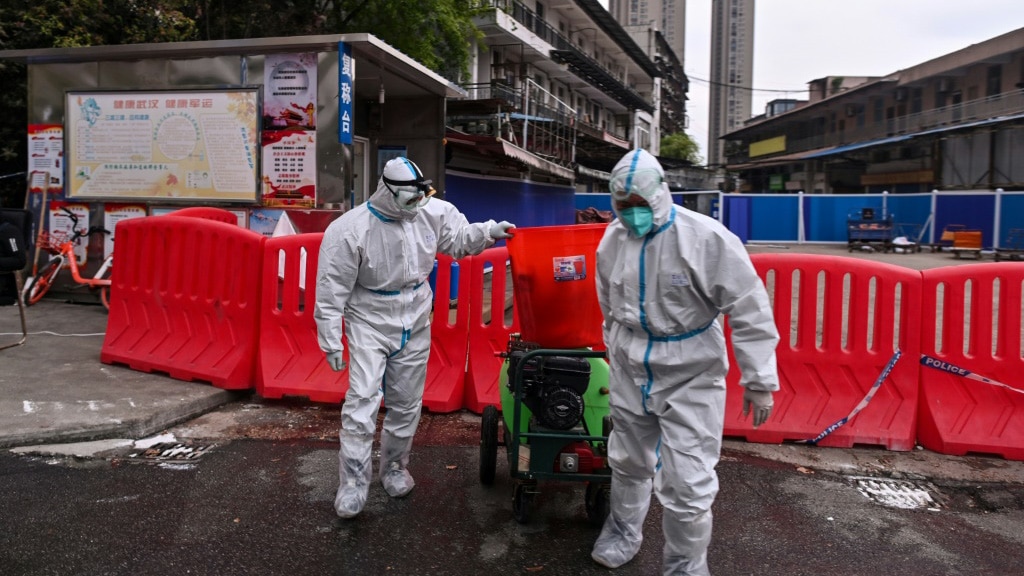 The market has been sealed but police tape, chest-high red barriers and staff in hazmat suits serve as reminders of its ground-zero status

Markets such as this are the final stop in what conservationists say is a brutal trade in wild animals that is fueled in large part by Chinese consumption.

It caters to an enduring demand for wild animals as exotic menu items or for use in traditional medicines whose efficacy is not confirmed by science.

The Wuhan market was sealed and disinfected beginning in January after the outbreak began to spread.

Now only disinfecting crews go in and out. Long red banners stretch across the temporary blue wall, exhorting passersby to do their part in the fight against the virus. 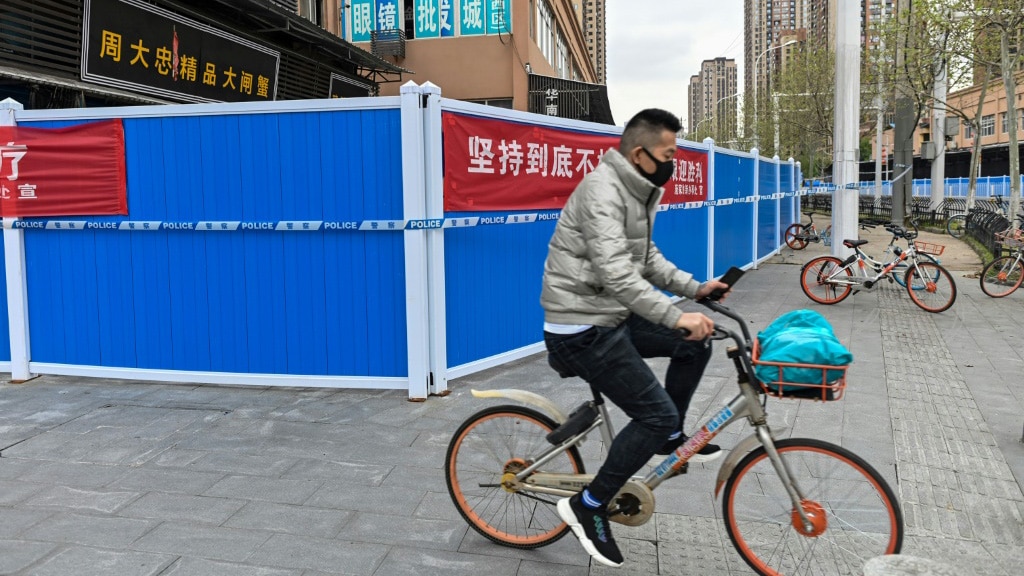 The Wuhan market was slated for closure

As the global health disaster has intensified, sparking tension between Beijing and Washington, the birthplace of the virus has since disappeared by behind the temporary blue-and-white wall, and an inner curtain of black sheeting.

Mentions of the site have likewise disappeared from government epidemic discourse and official media reports, as some Chinese officials have pushed a new narrative that the virus might not have originated in the market, while offering no evidence.

After a more than two-month lockdown to contain the virus, in which citizens of Wuhan and the rest of Hubei province were confined to their homes, life is inching back toward normality.

Border controls are loosening, allowing residents who were stranded outside the province — as well as foreign journalists — to begin re-entering in recent days.

But the market’s fate seems sealed.

For weeks, crews have carefully disinfected and then removed all of its merchandise and other contents, followed by further rounds of disinfecting the entire site, according to state media reports. 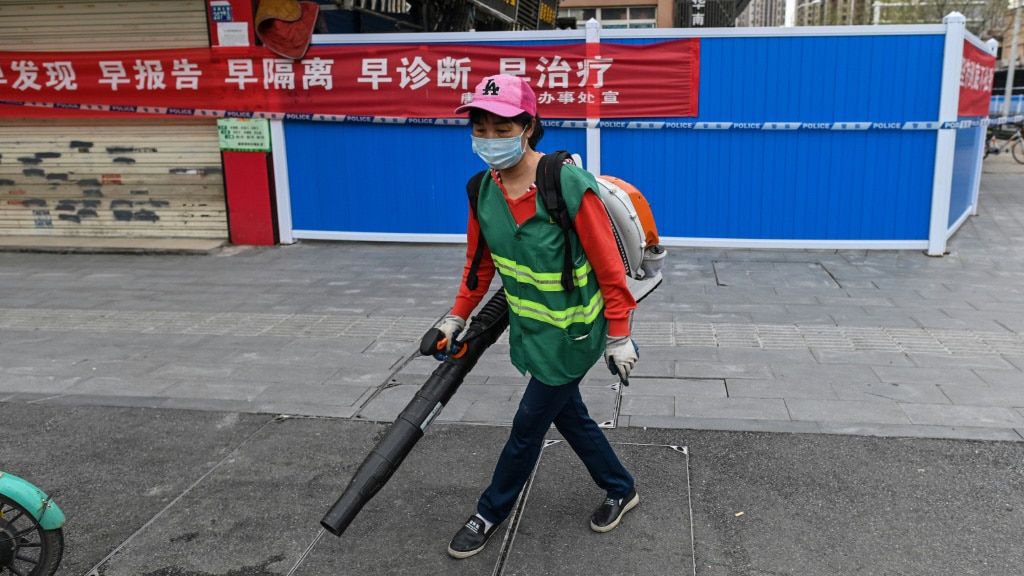 Wuhan market is disinfected in the bid to clear off the deadly virus, beginning January

The market is slated for permanent closure, according to the reports, though no plans to demolish the site have been announced.

China has, however, announced plans for a “comprehensive” ban on the wildlife trade that reportedly flourished there.

It was not immediately clear what locals in the area thought of the continued presence of the market, which lies among tall and modern residential blocks.

Adjacent streets remained deserted on Monday, with transport controls and other restrictions on movement still in place throughout the city.

But one local community official shrugged off the market’s toxic legacy, telling AFP: “I don’t think local people have any fear when they get near the market.”