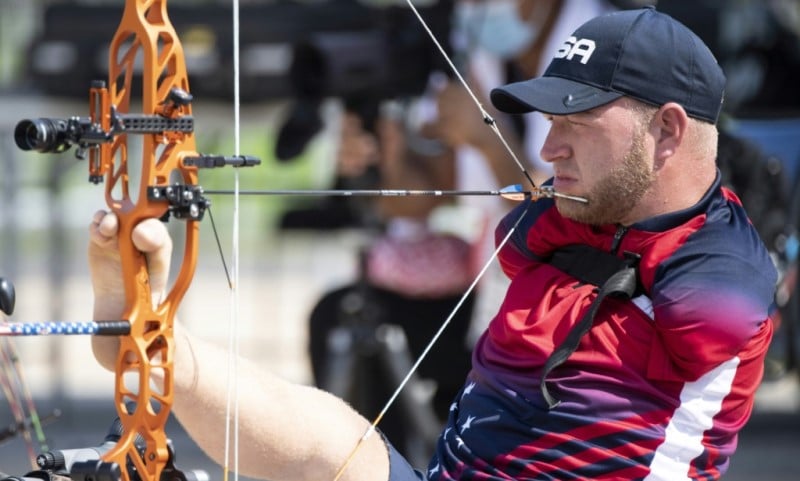 USA’s Matt Stutzman competes in the men’s archery individual ranking round during the Tokyo 2020 Paralympic Games at the Yumenoshima Park archery field in Tokyo on August 27, 2021.

“Armless archer” Matt Stutzman is one of the world’s most recognizable athletes, but he is sporting a new, slimmer look in Tokyo as he aims to make up for missing out on a Paralympics medal five years ago.

The London 2012 men’s individual compound archery silver medallist failed to get past the last 16 in Rio, so he decided to get fitter in his quest for Tokyo 2020 gold.

Stutzman weighed 103 kilograms (227 pounds) in Rio but has shed 27kg and said he felt the benefit in 35 Celsius (95 Fahrenheit) heat at the Yumenoshima Archery Park during Friday’s ranking round of the men’s individual compound event.

“I could probably shoot another 300 arrows, like I’m not tired at all, I’m ready to go,” he told AFP after breaking the old Paralympics Games record, but only placing 12th in a high-class competition to decide seedings for the knockout rounds.

Graphic on archery events at the Paralympic Games

“I feel almost like Superman… but not quite,” laughed the American, who was one of the Paralympians featured in the acclaimed Netflix documentary “Rising Phoenix” in 2020.

“It just went so fast,” Stutzman said of his afternoon’s work, which comprised 72 arrows shot in 12 waves of six over almost two hours out in the burning sun.

At one point he was third and vying for the lead before his accuracy deserted him to finish on 688 points, 17 behind first-placed He Zihao of China.

“I don’t really understand exactly what went wrong,” said Stutzman. “I’m still trying to figure out if it was me or equipment.”

The 2015 world champion, who was born with no arms and holds the bow with his foot, still did enough to earn a bye into the round of 32 where he will face the 21st-placed Shyam Sundar Swami of India on Saturday.

“Honestly I wanted to be in the top-four because what it does is it gives you kind of an easier-ish match for your first time in the stadium over there,” he said.

“But my mindset in these Games is I don’t care who it is. I’m gonna have to face my best at some point and, you know, I’ll just be ready.”

We Need a Mansion

As well as his general fitness, Stutzman also blamed a cracked arrow for his Rio disappointment.

“Yeah the nock (notch in the arrow) broke on my last shot,” said the 38-year-old. “But I’ve put that behind me because that’s something I can’t control.

“I’ve done a really good job over the last couple of years mentally preparing — just do your best you can and hopefully at the end of the event it falls your way.”

Stutzman, whose Twitter handle is @ArmlessArcher and his social media profile declares “I do everything with my feet”, is a proud single father of three boys.

He talked lovingly about his children, Carter, who is 14, Cameron (13) and Alex (8) who had to stay back home in Iowa because of Covid rules. 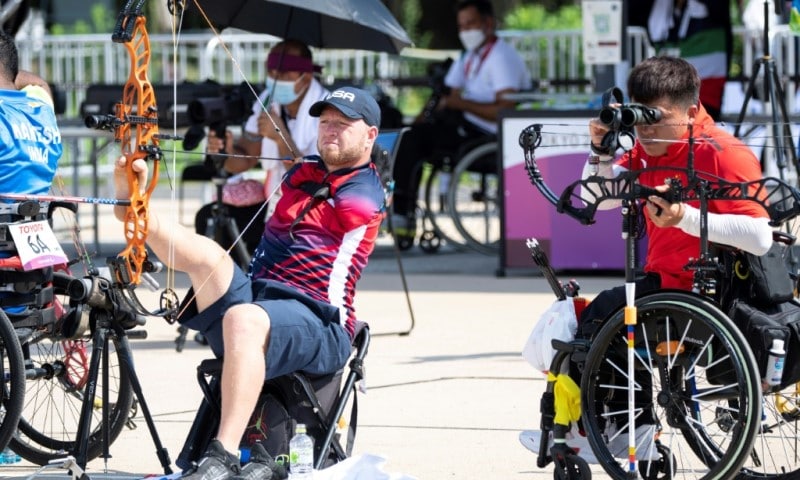 USA’s Matt Stutzman (L) and China’s Ai Xinliang (R) compete in the men’s archery individual ranking round during the Tokyo 2020 Paralympic Games at the Yumenoshima Park archery field in Tokyo on August 27, 2021.

“Yeah, this is my first Games that I haven’t been able to bring family,” said Stutzman, who was world champion in 2015.

“They are my inspiration. Without them I wouldn’t be out here doing this. I do this every day so I can take care of them.

“I talk to them every night. Because of electronics, and because of Zoom and all those amazing things that we have. It’s kind of like they’re here with me.”

Since he was featured in Rising Phoenix, which charted the history of the Paralympics and threw the spotlight on nine inspiring athletes, Stutzman has become an inspiration to millions around the world.

“It was an honor to be a part of that because it gave me a chance to tell my story in a positive way,” he said.

“And hopefully the world sees what we can do, and that motivates them to be better as well.”

To his three boys of course he’s just “Dad” — but they have become aware of his growing fame and that, said Stutzman, has brought extra pressures.

“They think we should have a mansion,” he laughed.