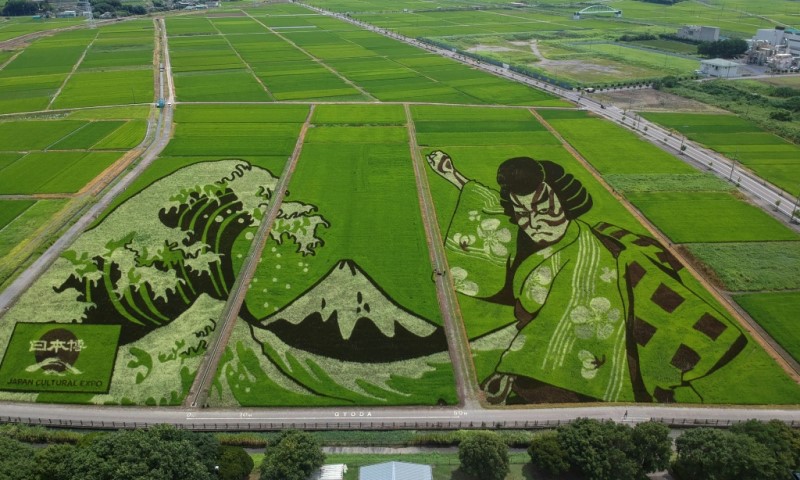 From the ground, there’s not much to distinguish the rice stalks in a field in Japan’s Gyoda. It’s only seen from above that a massive artwork marking the Olympics emerges.

The huge, living installation features iconic Japanese images: the famous wave and Mount Fuji of Katsushika Hokusai’s woodblock print and a Kabuki actor in striking facepaint, similar to one that featured at the Olympic opening ceremony.

The images are part of a yearly tradition started by the town of Gyoda in Saitama, north of Tokyo, in 2008 in a bid to bring in tourists.

In 2015, they even scooped a Guinness World Record for creating the world’s largest rice field artwork: 28,000 square metres.

Each year, a committee comes up with a new design and hundreds of volunteers plant differently colored varieties of rice to produce spectacular images that can be viewed from a nearby observatory.

A design is selected early in the year, with planting happening around May. In 2019, the theme honored the Rugby World Cup, hosted by Japan.

This year’s image was intended to highlight Japan’s cultural heritage, on the assumption that crowds of foreign visitors would be in the country for the Games.

“We wanted to show the Japanese arts of Ukiyoe (woodblock prints) and Kabuki (theatre) in a rice paddy field, which itself is also an important part of Japan’s culture,” Gyoda city official Shuhei Tagashira told AFP.

“We wanted to present Japan to the world.”

It hasn’t worked out that way, with foreign spectators barred and most Games events happening without even domestic fans allowed in the stands.

But on Friday, there were still people taking in the view from an observatory 50 meters up that offers a bird’s eye view of the piece.

“I expected something more simple. But it’s more complicated in its design and on a really large scale. I was impressed that the art is so panoramic.”

Maintaining the piece takes work, and on Friday nearly a dozen officials from the city’s agricultural department were weeding the field, pacing across the vast area in rubber boots and armed with sickles.

The work is important to stop the different colors from bleeding into each other or being muddied by other plants.

“Can you see the green, tall plants? Those are not rice, weed them,” city official Shuhei Tagashira called out as his fellow workers struggled in the muddy field.

The project is also designed to bring the community together and promote interest in farming.

In an ordinary year, about 1,000 people get involved in the complex task of planting the right varieties of rice in the right place to produce the artwork.

They include volunteers with some farming experience and those with no background in agriculture, including local children.

But the pandemic forced organizers to slash the numbers in half, though people will still have another chance to get involved when the rice is harvested in October.

And everyone gets a thank you gift at the end: two kilograms of rice in late November.