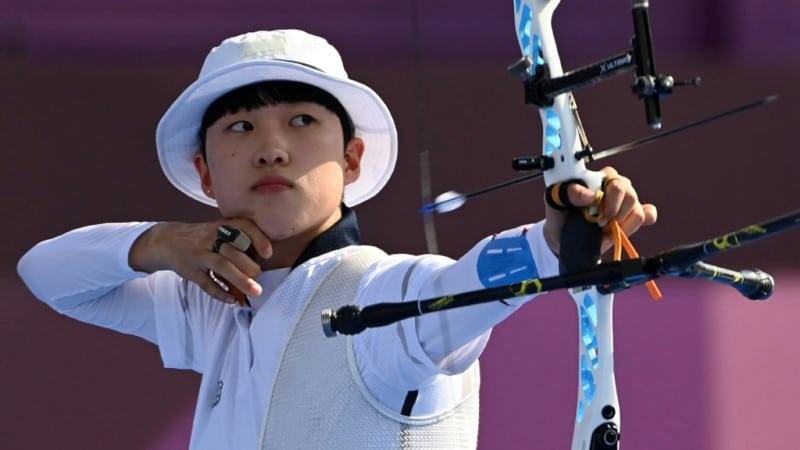 A South Korean archer who has bagged two Olympic gold medals in Tokyo was flooded with messages of support from women Thursday after her short hair became a lightning rod for online abuse from men.

Male commenters had said An San’s choice of hairstyle suggested she was a feminist, some of them demanding she apologise and even that she give back her Olympic medals.

While South Korea is the world’s 12th-largest economy and a leading technological power, it remains a male-dominated society with a poor record on women’s rights.

The outbreak of online misogyny comes as an anti-feminism backlash grows in the country, with companies accused of endorsing “extreme feminism” facing boycotts by men and issuing public apologies.

An, 20, has won two gold medals in the women’s team and mixed team archery. She scored 680 to top the women’s individual qualification at the Tokyo Games, breaking an Olympic record that has stood since 1996.

She is aiming for her third gold medal in Tokyo in the ongoing women’s individual event.

Many South Korean women, including well-known figures, came out to condemn the comments.

“Even if you win an Olympic gold medal with your own skills and abilities, as long as sexism persists in our society, you get insulted and asked to be deprived of your medal just because you have short hair,” tweeted Jang Hye-yeong, a woman lawmaker.

“We are facing a strange day in which Korean archery is now the best in the world, but the national dignity is thrown to the ground because of sexism.”

At least 6,000 photographs of women with short hair were posted on social media platforms to show support for An, according to local reports.

Among women posting the images were actress Koo Hye-sun and lawmaker Ryu Ho-jeong — the country’s youngest MP, who was once criticized for wearing a dress to parliament.

The website of the Korea Archery Association — which did not immediately respond to AFP’s request for comment — was flooded by at least 1,500 messages in support of her.

The men whose angry messages sparked the storm had further accused An of having used expressions with anti-male undertones.

“We didn’t train and feed you with tax money so that you can commit feminist acts,” one of the men wrote on An’s Instagram account.

There have also been protests against the country’s strict beauty standards — with campaigners sharing viral videos of themselves cropping their hair short and smashing up their make-up products.

But it has also triggered a strong backlash in the country, and feminism is often framed as selfish, and anti-men.

“It’s been very disheartening to see women, including an olympic champion, being pressured to explain and even apologize about their own choices and bodies, when it really should be no one’s business,” women’s rights activist Kwon Soo-hyun told AFP.

“This incident yet again shows the scale of sexism in our society.”