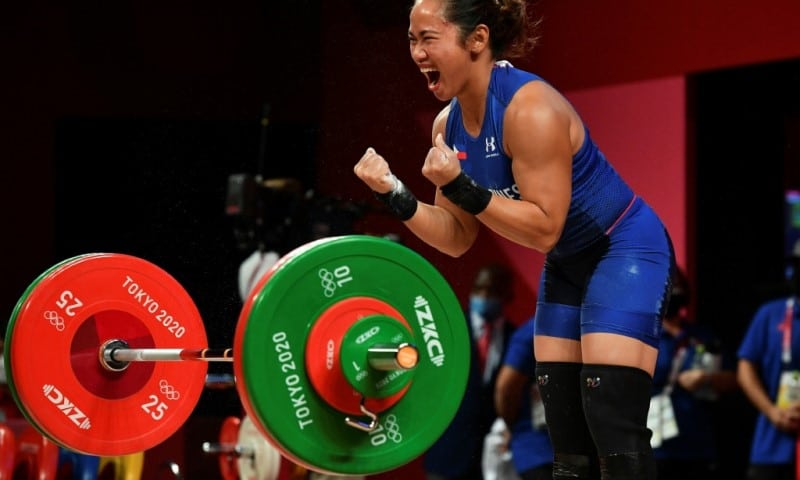 Weightlifter Hidilyn Diaz made history on Monday when she became the first athlete from the Philippines to win an Olympic gold medal.

The 30-year-old Rio 2016 silver medallist from the southern city of Zamboanga realised her dream in the women’s 55kg class at the Tokyo International Forum, smashing her personal best to see off world record holder Liao Qiuyun of China who had to settle for silver.

With Liao setting a target of 223kg, just four kilogrammes shy of her own world record, Diaz was faced with a final clean and jerk of 127kg to win — fully 5kg more than she had ever achieved in competition.

With a massive effort she hoisted the huge Olympic record weight and the tears of joy began to flow even before she dropped the bar to the floor after a triumphant effort. 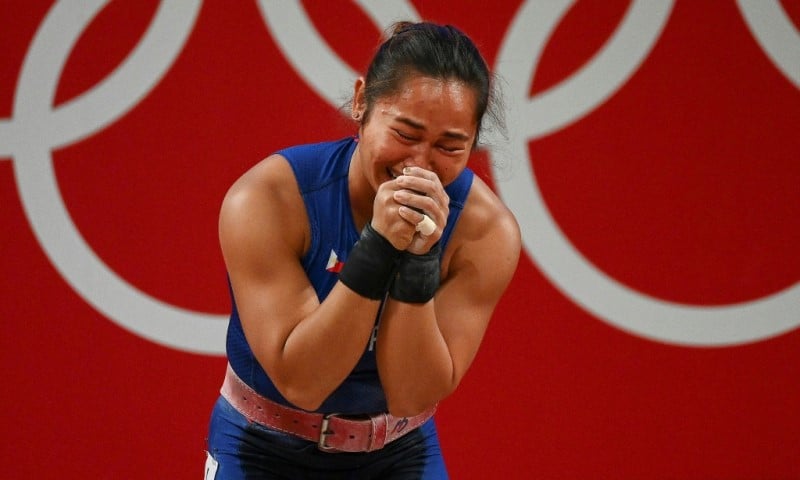 Liao took the silver, with Kazakhstan’s Zulfiya Chinshanlo the bronze 10kg adrift of the top two.

“It’s unbelievable, it’s a dream, come true,” Diaz told AFP moments after the Philippines Air Force woman shed more tears on the podium as she saluted her flag and sung the national anthem.

“I want to say to the young generation in the Philippines, ‘You can have this dream of gold too’.

“This is how I started and finally I was able to do it.”

Diaz was already assured a place in her country’s sporting folklore, alongside the likes of boxing icon Manny Pacquiao, as the only woman from the sprawling archipelago ever to win an Olympic medal — her surprise silver five years ago breaking a 20-year medal drought for the Philippines.

Diaz spent the last year and a half training in exile in Malaysia because of Covid restrictions, so dedicated was she to claim an unprecedented gold in her fourth and probably final Games.

“I’m looking forward to going back home to the Philippines to be with my family because I really miss them,” she said, choking up once more with emotion.

“I’m looking forward now to enjoy my life after so many sacrifices.”

Diaz’s medal was just the 11th by the Philippines since they first took part in the Olympics in 1924, and now the only gold.

Diaz became just the second athlete from her country to win multiple Olympic medals, joining swimmer Teofilo Yldefonzo who won bronze in the men’s 200m breaststroke in 1928 and 1932. 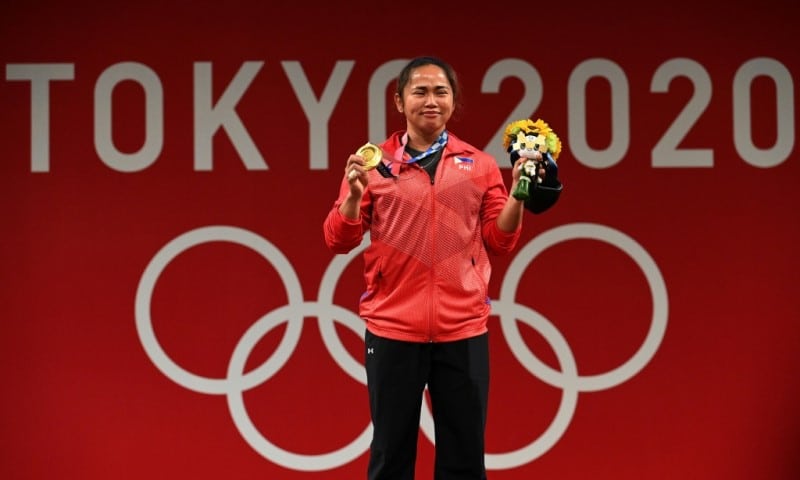 She became a national hero for her exploits in Rio and her profile soared when she won Asian Games gold in Jakarta in 2018.

But on that occasion China were suspended by the International Weightlifting Federation for multiple doping violations.

China have been dominant since their return later in 2018 and have had it all their own way so far in Tokyo in the absence of fierce rivals North Korea.

The first three weightlifting golds were all won by Chinese athletes — in the women’s 49kg through Hou Zhihui on Saturday and men’s winners Li Fabin (61kg) and Chen Lijun (67kg) on Sunday.

Liao was gracious in defeat as the Chinese gold rush in weightlifting was halted in stunning fashion. 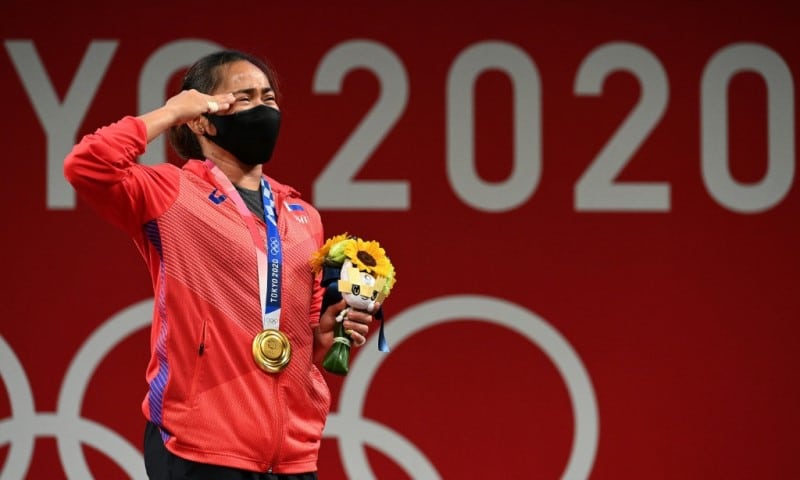 An emotional gold medallist, Hidilyn Diaz, salutes during the anthem after winning the 55kg weightlifting

“I really respect Diaz as an opponent because she did the best she could, in fact better than that and that is the ultimate,” Liao said.

“She did a better job and it is nice for all the people that were supporting her.”

Diaz, known as “Haidee”, has a huge social media following in her home country which is set to grow.

Internet platforms instantly turned her into the country’s top trending topic on Twitter as news of her win spread, upstaging President Rodrigo Duterte‘s final State of the Nation address.

“Congratulations, Sgt Hidilyn Diaz!” tweeted the Armed Forces of the Philippines where the weightlifter is enlisted.