A Year in Wuhan: AFP’s Guardian Agency Photographer of 2020 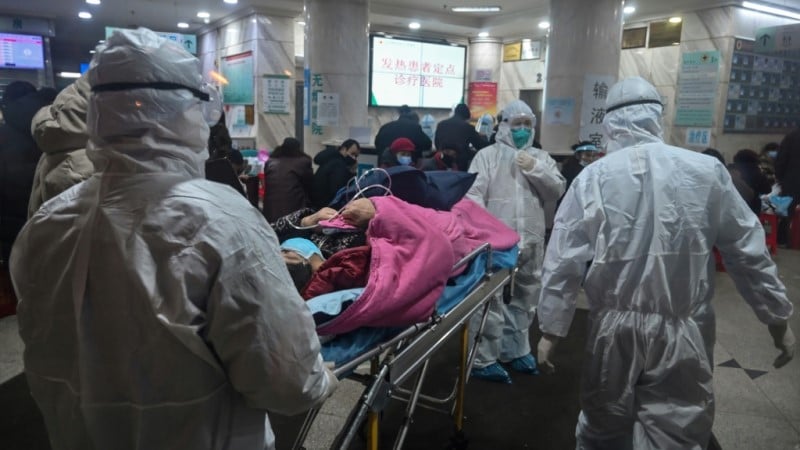 The Red Cross hospital in Wuhan in January

AFP’s Chilean photographer Hector Retamal, based in Shanghai, has been named news agency photographer of the year by The Guardian for work including his reporting on the ordeal of people in Wuhan, the city where the Covid-19 pandemic started.

Here he recounts his experiences, as published earlier on AFP’s blog:

I had been to Wuhan once before the virus, to cover a basketball game. It seemed enormous. Eleven million people live there — that’s more than Mexico City, New York or Paris.

I had relatives from Chile — my mother, my cousin and her fiance — visiting me in Shanghai when I first heard about the virus in mid-January. I felt a bit worried. At first my main concern was whether they would be able to leave China to get home.

Then the masks started appearing in the street. Within a few days, I could sense that it was a big story. 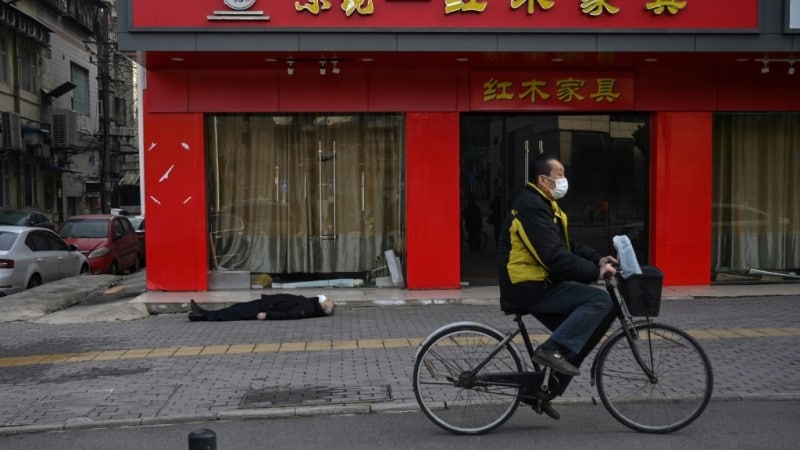 The lifeless body of a man lying on the street, not far from Wuhan hospital

I headed to the train station to go to Wuhan. My bosses phoned to discuss their concerns about the mission. I insisted on going. I reminded them that I had already covered a cholera epidemic in Haiti.

I truly grasped the seriousness of the situation when the high-speed train arrived after four hours in Wuhan.

Hardly anyone got off there.

I did, and stepped out into a ghost town. Fear had gripped Wuhan’s inhabitants. Police officers told me and my colleagues to go back to our hotel.

“It is dangerous to stay in the street,” they said.

There was fear in the air. I saw people shut up in their homes, peering out of their windows. In two hours walking around the city I must have seen only about four or five other people outdoors.

But the shock really came when we went to visit the hospitals.

People were queuing inside, some sitting on stools. What was even more unusual was that people came up to me and took my arm, asking me to come in and see.

They wanted to show me what was happening. That doesn’t usually happen in China.

I was hesitant to follow them in case the security guards saw me and called the police. But I went inside anyway, and then I saw how difficult the situation was. The hospitals were clearly swamped.

A woman next to me vomited. Other people were coughing. They were not wearing masks. Others were waiting in the corridor with drips in their arms. New patients with breathing difficulties kept arriving for the emergency room. 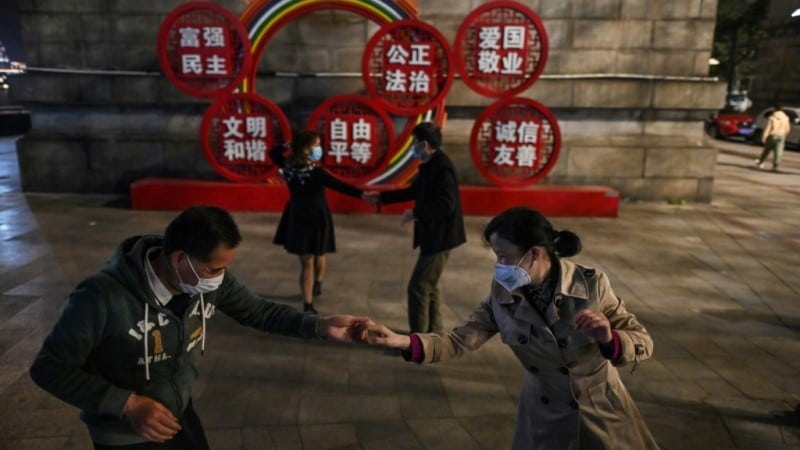 The return of dancers to Wuhan in April

Then I took this photo.

We never found out what this man died of, though we tried.

The old man’s body lay on the ground for hours before people came to take it away. The picture of the body and the agitation around it came to symbolize the Covid-19 crisis.

After two weeks as one of the few foreign media outlets in Wuhan, we flew out of the city onboard a French medical evacuation plane on January 31 bound for Marseille.

We spent two weeks in quarantine in France before returning to Asia later in February. We wrote about our experience on this blog. 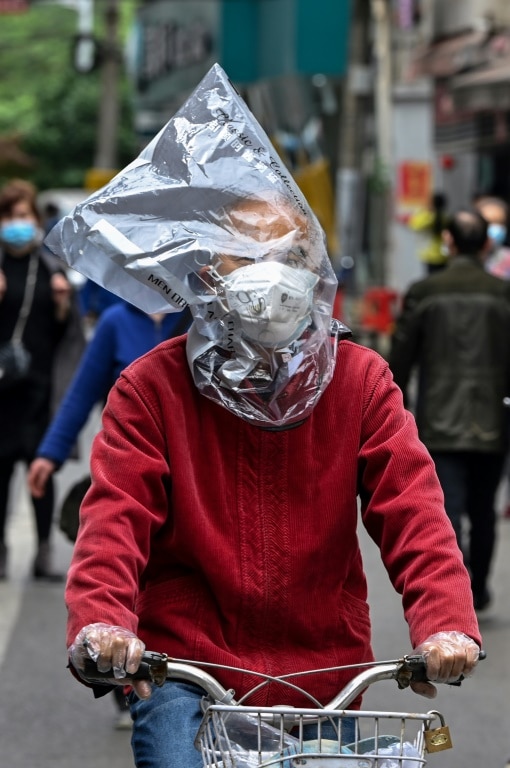 I got back to Shanghai on February 24. I stayed in a hotel for two days while I found out what the situation was in the building where I live and whether I would have to go into quarantine again.

Luckily I did not. When I went back to my building, I was questioned by members of a local “neighborhood committee”. I had my temperature checked every day.

I went back to Wuhan in late March, just after the city ended its mass lockdown.

Some people were still shut up at home: they did not yet dare to venture out. I saw people passing them food through the security barriers. But little by little, life was getting back to normal.

Wuhan is a huge city but the people there are friendly. People kept coming up to me and asking what I was doing there. 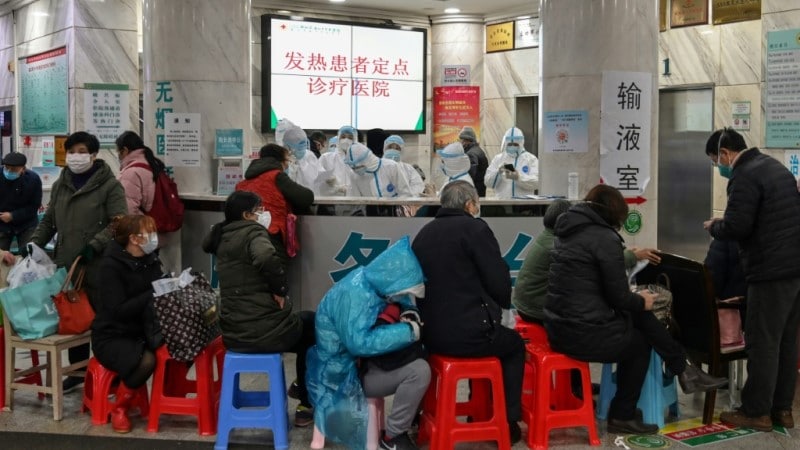 This was when I met the first group of dancers.

Wuhan is a city at a crossroads in the heart of Hubei province. It links the east of China to the west, and the north to the south. It is watered by the great Yangtze river, halfway between Beijing and Guangzhou in the south.

Wuhan is a relatively rich city.

There are dozens of scientific research centres and laboratories. There are mining companies, car factories, steel, textiles.

It is also a big farming hub: cotton, cereals, fish-farming. Hubei is known as the “land of fish and rice”, in the shadow of the great Three Gorges Dam.

The best place to go is the banks of the river. The life of the city seems built around them.

I went there often. I took photos of young couples, people swimming, dancing. I met some of the same people again when I returned over the course of the year.

I made friends with some of the people I met on the riverbanks. At first, there were just a handful of them. 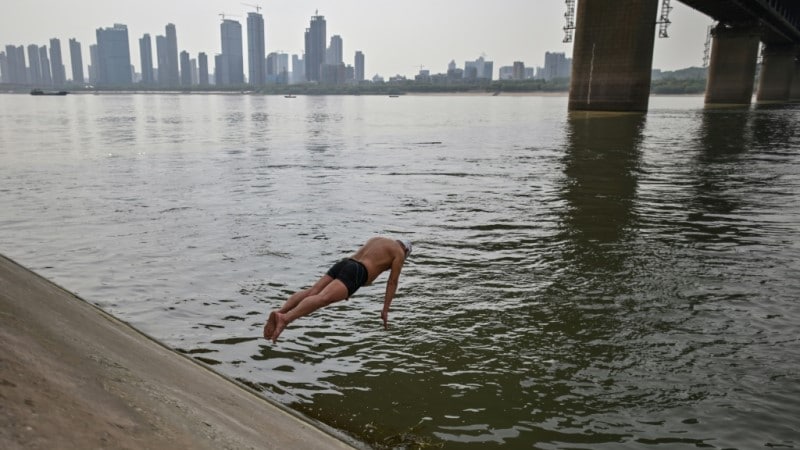 The best place to go is the banks of the river, says AFP’s Guardian agency photographer of the year

The city also has lots of parks where people like to go to exercise and dance.

For me, Wuhan is like a smaller version of Shanghai — modern, beside a river — but far more friendly.

In Shanghai, some people are afraid that foreigners may be carrying the virus.

Sometimes when I take an elevator people do not want to get in with me. But that never happened to me in Wuhan. People there greet me. They come and talk to me and ask me questions.

I like getting close to people. I like to be accepted and win people’s trust. I want them to feel at ease and take the time to talk.

How could I get an insight into other people’s lives if I do not let them into mine?

I learned that in Haiti, where life is hard and people get by with nothing.

In Wuhan, I did not try to stay out of sight. I want people to know what I am doing and understand why I am there. I do not hide my camera. That is the basic rule.

I do not like photographs taken covertly and if someone asks me to delete one then I do.

After a reporting mission I always wonder what has become of the people I met.

This year in Wuhan I was able to go back and see some of the people and check if they were alright — particularly with the people who swim in the river.

I enjoyed seeing how the city got on as time went by.

I even went to a nightclub. It was full of people. Chinese people love to party, and Wuhan is a young city with lots of students.

On my last visit to Wuhan, in late November, I looked for any remaining signs of the pandemic.

I couldn’t find any.

The city seemed to have got back to normal, even after 4,000 people died from the virus there.

That number accounted for most of the deaths from Covid-19 recorded in China. One man we met, Liu Pei’en, converted to Buddhism in order to find new meaning in his life after his father died.

Another, Zhong Hanneng, had lost his son and could not sleep.

The streets were packed, there were traffic jams and shopping centers were crowded.

There were perhaps slightly fewer people out than during the summer, because of the rain and the cold. But as soon as the sun came out, people came out onto the street.

The only thing that did not seem to have returned to Wuhan were the foreigners.

In one week there I must have seen about two other foreigners. There were far more of them before the virus.

The fear of the virus is still there, though.

At the hotel they asked to see my negative Covid-19 test certificate and my health QR code.

Every city now has a QR code provided by the health authorities for individuals to keep on their telephones.

It contains data collected via the telephone about where the person has been and whether they have been close to an infected person.

The rules were strict throughout the virus crisis and in Shanghai recently they have started reimposing some measures such as mask-wearing.

In some places, they still take your temperature, close-up or with a thermal camera. You can be asked to show it to get into a shopping center, for example.

If it shows up green then you are alright.

You can find more pictures and the long format version of this blog here: https://correspondent.afp.com/four-seasons-wuhan