Thai pro-democracy protesters scaled a Bangkok monument Saturday night to unfurl a giant banner scribbled with anti-government slogans, and a Thai hip hop group took aim at the monarchy with their new song.

The kingdom has for months experienced massive student-led demonstrations demanding a new constitution, changes to how the royal family operates and for Prime Minister Prayut Chan-O-Cha — who rose to power in a 2014 coup — to resign.

Several thousand people turned out for a carnival-themed rally dubbed “Mob Fest” at the Democracy Monument, a major intersection in Bangkok.

In the afternoon, high school students and other demonstrators wrote in marker pens and spray-painted messages on giant white sheets. 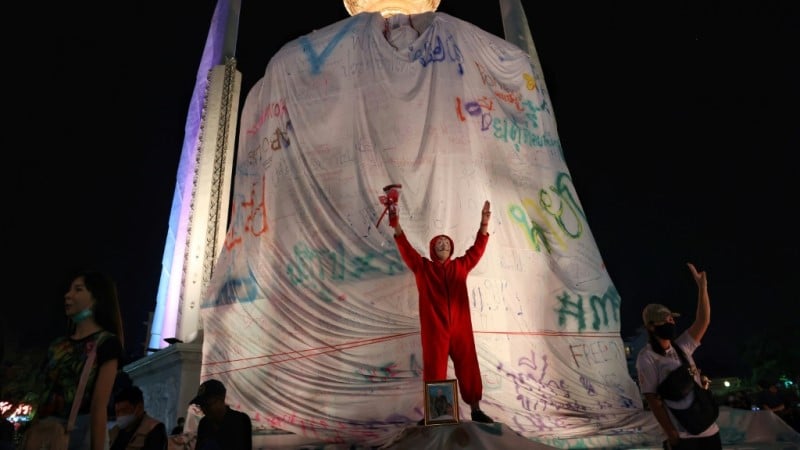 “You have been stealing my bright future,” one message said. “Democracy will win.”

Bangkok graphic designer Pearl, 25, watched as a group of protesters used ladders to climb up the three-metre (nine-foot) high central turret of the Democracy Monument, as musicians played a drum beat.

“This is a symbolic act of free speech,” she told AFP.

Protesters sang a Thai version of Les Miserables “Do You Hear the People Sing?” and the crowd raised their hands in three-finger salutes — a pop culture reference to the “Hunger Games” movies.

Earlier they turned their backs and did the same gesture as the royal motorcade drove past.

King Maha Vajiralongkorn and Queen Suthida were en route to open a new train line elsewhere in the city — with thousands of royalist supporters wearing yellow turning out to show support.

Thai hip-hop sensation Rap Against Dictatorship debuted their latest song ‘Reform’ in front a live audience at the protest on Saturday night.

The group released the music video clip on Friday, which has already garnered 1.4 million views on YouTube and was shot at previous rallies. 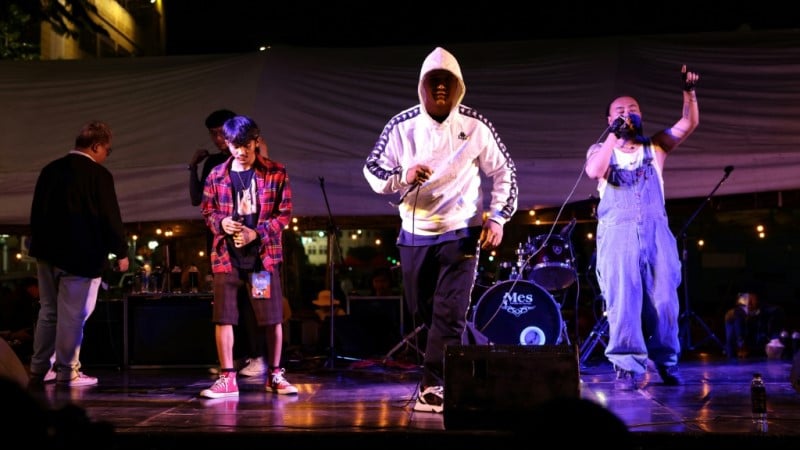 The Thai band “Rap Against Dictactorship” performs on a stage for pro-democracy protesters gathered for an anti-government rally in Bangkok on November 14, 2020

“You feast on our taxes so we ceased to be mute. No we ain’t gonna grovel, here’s our three finger salute,” the band raps in their new song.

Dechathorn said the song was inspired by the government’s lack of response to the protest movement and failure to act on its demands.

“Yes, I am afraid of being arrested again — that’s why the words of the song have come from the protest mob,” Dechathorn told AFP.

“We are raising questions rather than just cursing the government in this song,” Nutthapong “Liberate P” Srimuong said, adding he hopes it brings the reform agenda to a broader audience. 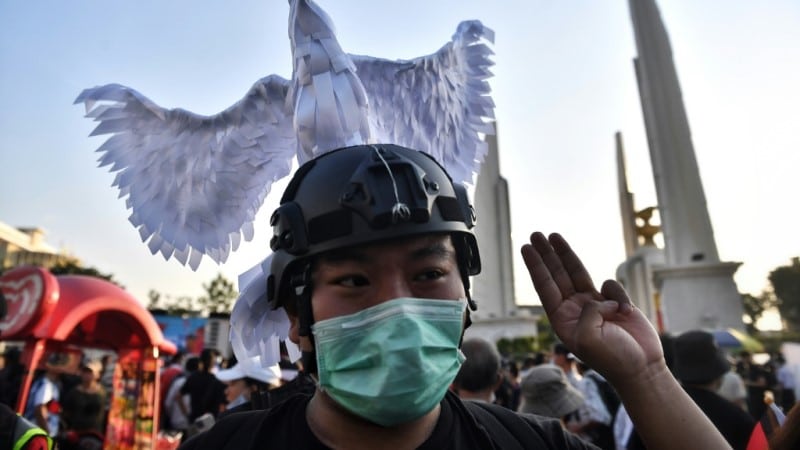 Thailand’s National Office of Buddhism this week issued an order barring monks and novices from attending mass protests, but that didn’t stop two monks from taking to the stage.

“The leaders of Buddhism have warned if we participate they will take our titles and chase us out of the religion. They should do that to the Lord Buddha too,” one monk told the crowd.

“I’m right to use my orange robes as a shield for the people.”

They want Education Minister Nataphol Teepsuwan to resign and staged a fake funeral for him. 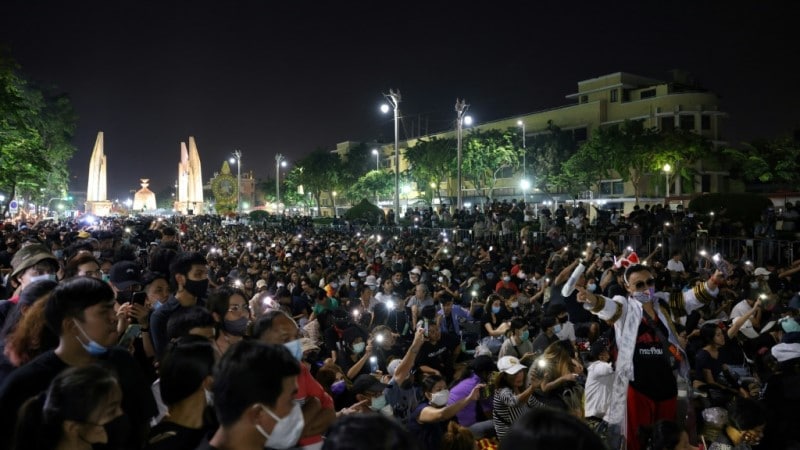 Pro-democracy protesters take part in an anti-government rally next to the Democracy Monument in Bangkok on November 14, 2020

“He has failed to reform the education system so he is dead to us,” Anna 15, told AFP, as she put flowers into a wooden coffin, next to a picture of the minister.

The students are calling for an overhaul of the school system, curriculum, strict rules, dress codes and standardized haircuts.

Police used water cannon against demonstrators at a rally last Sunday. It was only the second time such tactics were used.