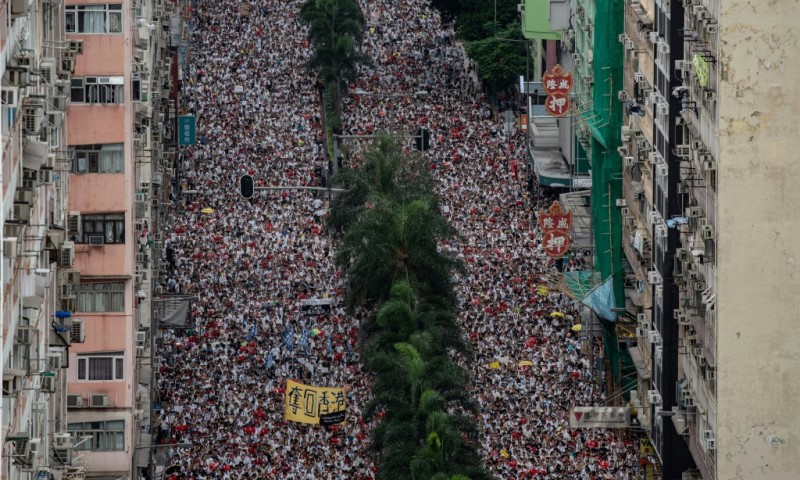 The CHRF routinely got crowds of hundreds of thousands, if not more than a million, onto the streets of Hong Kong

The Hong Kong protest coalition that organized record-breaking democracy rallies two years ago said Sunday it was disbanding in the face of China’s sweeping clampdown on dissent in the city.

The dissolution comes as China remolds Hong Kong in its own authoritarian image and purges the city of any person or group deemed disloyal or unpatriotic.

The Civil Human Rights Front (CHRF) was a major player in the months of democracy protests that convulsed Hong Kong in 2019.

But the group said Beijing’s subsequent crackdown on democracy supporters and a de facto ban on protests had left it with little future.

“All member groups have been suppressed and civil society is facing an unprecedented severe challenge,” it said in a statement announcing why it was disbanding.

Its remaining HK$1.6 million ($205,000) in assets would be donated to “appropriate groups”, the statement added.

The 2019 protests began in response to a deeply unpopular law that would have allowed extraditions from the semi-autonomous city to authoritarian mainland China.

But they soon morphed into calls for greater democracy and police accountability after huge crowds were dispersed with tear gas and rubber bullets.

The CHRF, founded in 2002, espoused non-violence and routinely got crowds of hundreds of thousands strong onto the streets.

Some estimates said more than a million people marched at some rallies, in a city of 7.3 million residents.

China’s response to protesters has been to dismiss their demands and portray them as part of a foreign plot to destabilize the motherland.

A sweeping national security law was imposed on the city last year that criminalized much dissent and has seen many of the city’s democracy leaders jailed or fled overseas.

More than 30 civil society groups have already disbanded, fearful that national security police will come for them next, according to an AFP tally.

Earlier this week the city’s biggest union — the Professional Teachers Union (PTU) — said it was shutting down after nearly 50 years of operation.

Most of the CHRF’s prominent activists, including former leaders Jimmy Sham and Figo Chan, are already behind bars for organising the protests or on national security charges.

But a small group of activists had kept the organization going at least in name.

National security police had already begun an investigation into the umbrella group over its finances and whether it was properly registered.

Earlier this week police chief Raymond Siu also told a pro-Beijing newspaper the CHRF might have broken the national security law with its 2019 rallies.

Those comments caused alarm because the law — enacted on June 30, 2020 — is not supposed to be retroactive.

“Crimes made by a group and its members will not be wiped out due to it disbanding, or members quitting,” police said in a statement reacting to the CHRF’s dissolution.

Both the CHRF and the PTU decisions to disband came after multiple pieces were run in China’s state media attacking the organizations and calling for Hong Kong authorities to do more to dismantle them.

State media have also singled out two other organizations in recent weeks.

They are the Hong Kong Alliance in Support of Patriotic Democratic Movements of China — which has historically organized the city’s now-banned vigils marking Beijing’s deadly Tiananmen Square crackdown — and the city’s biggest pro-democracy labor coalition the Confederation of Trade Unions.

by Yan Zhao and Jerome Taylor