A tale of heartbreak – a dead whale was found in the shores of the Philippines. Marine biologists are calling it the worst case of plastic ingestion.

A beaked whale washed up in the shores of Mabini, Compostela Valley, Philippines after dying of starvation and dehydration due to plastic ingestion.

Volunteers and marine biologists who examined the male Cuvier whale’s body were shocked after they found 40 kilos of plastic inside its body. 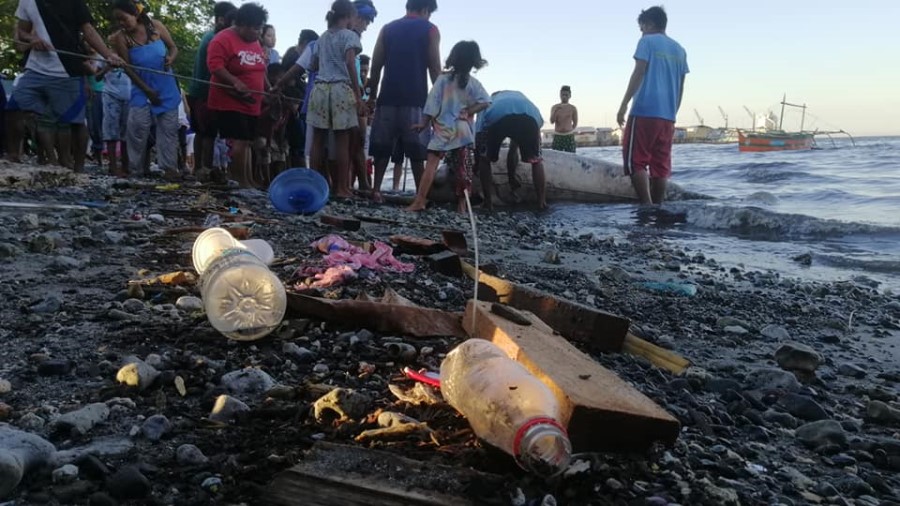 “I was not prepared for the amount of plastic. 40 kilos roughly of rice sacks, grocery bags, banana plantation bags, and general plastic bags. Sixteen rice sacks in total. It was so big, the plastic was beginning calcification,” said environmentalist, marine biologist, and founder of D’Bone Museum Darrell Blatchley in an interview with CNN Philippines.

Images from the 4.7-meter whale’s autopsy showed trash extracted from the animal’s stomach went viral online. According to Blatchley, it was the most number of plastics he has seen in a whale.

“The Philippine people are a proud people, sadly it’s not in being clean or taking care of the environment. In the last 10 years we have recovered 61 whales and dolphins, of which 57 have died due to fishing nets, dynamite fishing, and plastic garbage,” he said. 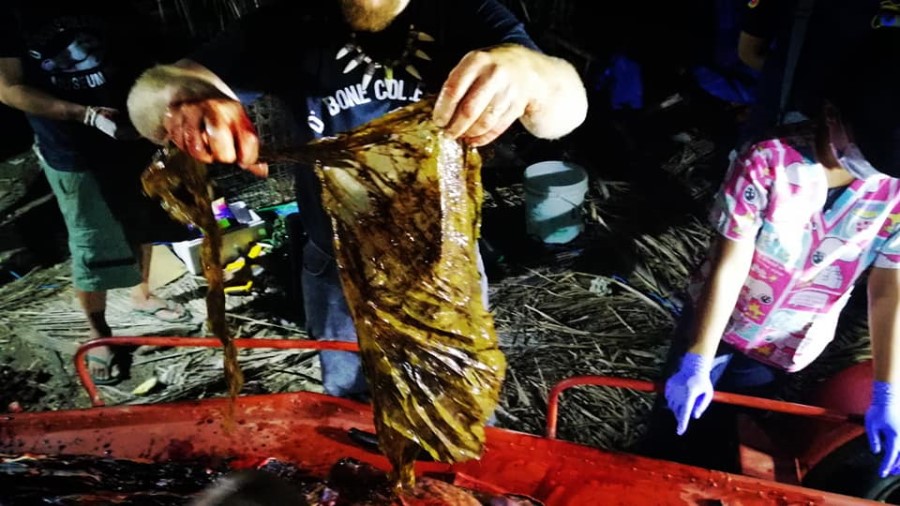 “Four were pregnant. This cannot continue. The Philippines needs to change from the children up or nothing will be left,” he also stated, adding that the government must take action against those who dump their waste in the waters.

Southeast Asia is one of the world’s biggest ocean polluters. In fact, a report by Ocean Conservancy claimed that the Philippines, China, Thailand, Vietnam and Indonesia have been dumping more plastic in the ocean compared to the rest of the world.

Just last year, a dead whale was found in Thailand after drying from ingested plastic were seen all over Asia news. A total of 80 plastic bags were found in its stomach.

Marine biologists also suggest that more or less 300 animals which include sea turtles, dolphins, and even pilot whales die in Thailand due to plastic. This just proves that Southeast Asia’s obsession over plastics needs to stop.

Asia: Love in the Age of Online Dating Apps

“Love capitalism” has dodged even the most dogged of cultural norms that stump even the locals.

A Nepali mountaineer on Tuesday smashed the speed record for summiting the world’s 14 highest peaks, racing up all “8000ers” in just six months and six days, organisers said.

Artistic expression is what these two do best

Britain told Hong Kong on Friday that it had “no right” to order other countries not to accept a UK travel document for a popular youth working scheme after the city confirmed it had made the request to several other nations.

Why the World is Watching Australia’s New Big-Tech Rules

Australia on Friday moved a step closer to introducing pioneering legislation that would force tech giants to pay for sharing news content, a move that could change how people worldwide experience the internet.

Nearly One Billion Confined to Homes as Virus Toll Nears 13,000

Nearly one billion people around the world were confined to their homes Saturday as US states implemented stay-at-home orders similar to those in Europe, and as deaths from the global coronavirus pandemic surged towards 13,000.

Sri Lanka will issue captive elephants with their own biometric identity cards and ban their riders from drinking on the job under a wide-ranging new animal protection law.

Undeniably one of the most popular Vietnamese food franchises in the world, Pho Hoa recently announced that it will be renouncing fees for those who want to co-brand Jazen Tea and Pho Hoa.

Beijing on Monday banned written exams for six- and seven-year-olds, as part of sweeping education reforms aimed at relieving pressure on pupils and parents in China’s hyper-competitive school system.

The COVID ‘Longhaulers’ Behind a Global Patient Movement

Snatching moments of clarity through the brain fog that was among the lingering symptoms of her coronavirus infection, Hannah Davis joined a team of similarly ill researchers and launched a study of what is now called “long Covid”.

Chef Andrew Wong’s London restaurant did not just welcome the new year, but also two Michelin stars, becoming the first-ever Chinese restaurant outside China with the distinction. He shares his victory with his staff and all the Chinese restaurants that came before A. Wong.

A Hong Kong journalist was arrested Tuesday in a probe linked to a recent documentary she co-produced investigating an attack on democracy supporters by government loyalists, a move her employers described as “chilling”.

Mobile Verdict: A Glimpse into the Future World of China’s Digital Courts

Forty years ago this month the first men began dying of a mysterious disease in California that would later be identified as AIDS.

A top Chinese diplomat warned Canada Thursday against granting asylum to Hong Kong democracy protesters, adding that doing so could jeopardize the “health and safety” of Canadians living in the southern Chinese financial hub.

Dozens of parrots stuffed into plastic water bottles have been discovered on a ship docked in Indonesia’s Papua region, authorities said Friday.

Egypt has signed a non-disclosure agreement with the Japanese owner of a megaship that blocked the Suez Canal in March as it finalizes a compensation agreement, the canal authority chief said.

A novel coronavirus vaccine has for the first time “largely protected” monkeys from infection during an animal trial, data from a Chinese pharmaceutical giant showed.

The human family tree has just grown much larger with the addition of a newfound member. This recent discovery put yet another piece to the puzzle as we try to understand human evolution in Asia.

Half a century ago a North Korean agent hijacked the flight carrying Hwang In-cheol’s father. Pyongyang never returned him, and the search has defined his son’s life.

A growing number of current and recovered Covid-19 patients in India are contracting a deadly and rare fungal infection, doctors told AFP Monday as the vast nation battles to contain a massive outbreak of virus cases.

A luxury resort in southern India has turned its swimming pool into a fish farm to stop the business sinking amid the economic crisis caused by the coronavirus pandemic.

China on Sunday announced it had administered its one-billionth shot in the world’s biggest coronavirus inoculation drive as Brazil’s death toll from the pandemic passed 500,000.

Could a pair of decades-old, relatively inexpensive drugs be the solution to the novel coronavirus pandemic?

Japanese swim star Rikako Ikee will enter four events at next month’s national championships, reports said Wednesday, as she vies for a Tokyo Olympics spot in her comeback from leukemia.

More than 30 years after American Scott Johnson was killed in a suspected gay hate crime in Australia, police said Tuesday they had arrested and charged a man with his murder.

In an effort to cut waste, a café in the Philippines has eliminated plastic straws and only uses biodegradable ones made from coconut leaves.

Australia will take a group of ambassadors snorkelling on the Great Barrier Reef Thursday in a last-minute lobbying effort to keep the World Heritage site off UNESCO’s endangered list.

Chinese Tesla Challenger Debuts in Hong Kong with $1.8B IPO

Shares in electric carmaker XPeng debuted in Hong Kong on Wednesday, as Chinese-based firms trading in the United States seek to avoid the glare of Beijing’s regulators by listing closer to home.

A quick look at the history of this rather, tumultuous relationship between an Asian country and a South American nation. Let’s also examine how one country was able to influence the other through time.

Demand for rescue animals has soared in Australia as people stuck at home because of the coronavirus seek out cats and dogs to help them through the pandemic, officials said Wednesday.

Uttarayan is an annual International kite flying festival in Gujarat where giant kites shaped as mermaids, horses, and even footballs take over the sky

Google has urged YouTubers around the world to complain to Australian authorities as it ratchets up its campaign against a plan to force digital giants to pay for news content.

A famed Tokyo sushi restaurant where Barack Obama is said to have enjoyed the best sushi of his life has been dropped from the latest Michelin gourmet guide after it stopped accepting reservations from the general public.